Bruno shoots down Jets to kick off Remembrance Round

The round got underway early this week, with Melbourne City scoring its fourth win of the season 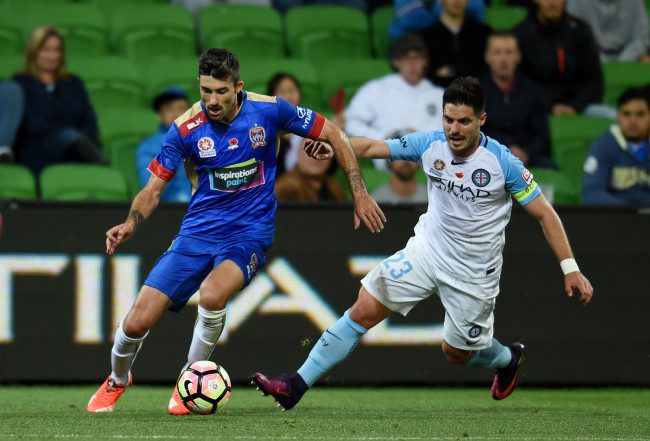 Round six of the A-League this weekend has been designated Remembrance Round, falling as it does around Remembrance Day, which commemorates the end of WWI.

The A-League players will wear a poppy logo on their shirts and join Scotland and England players, who will defy a FIFA ban and wear poppies on black armbands when they meet in a World Cup qualifier on Remembrance Day at Wembley.

A number of A-League teams will be missing key players due to international duty this week, but none more so than Wellington Phoenix, which will have five players on duty with the All-Whites.

The round got underway early this week, with Melbourne City scoring its fourth win of the season with a 2-1 home win over Newcastle Jets on Thursday thanks to another brace from record-breaking striker Bruno Fornaroli.

Central Coast Mariners v Wellington Phoenix
Saturday 12 Nov, 5.35 pm
GIO Stadium
Fans of both clubs had cause to celebrate last round when they each scored a maiden win of the season and broke long droughts in the process. For the Mariners, their 2-1 win over the Reds was their first win under new coach Paul Okon and it ended a drought of 281 days without a win. The Phoenix ended an unenviable run of six successive home defeats with a 2-0 home win over the Jets. The teams will square off in Canberra.

Both have poor defensive records this season, however the Mariners have scored twice as many goals. Coach Okon has tried to develop an attractive, possession-based style of game. With Phoenix missing five players to international duty including Kosta Barbarouses, keeper Glen Moss and central defender Andrew Durante, the Mariners will fancy their chances of picking up a second win on the trot.

Melbourne Victory v Western Sydney Wanderers FC
Saturday 12 Nov, 7.50 pm
Etihad Stadium
Expect a close-fought match between two teams separated by just a point and a place on the table. Victory will be keen to turn around what many consider was an unlucky loss to Sydney FC last week, whereas the Wanderers enter this match on the back of three straight draws. Wanderers coach Tony Popovic recalls experienced defender Robbie Cornthwaite to the squad in a bid to bolster a defence that, along with Phoenix and the Mariners, has conceded the most goals (10) this season.

Skipper Carl Valeri returns from injury to Victory, however coach Muscat will be without the services of his most potent forward Marco Rojas who is on international duty. Ben Kalfallah may start in Rojas’ position for the Victory.

Sydney FC v Perth Glory
Sunday 13 Nov, 5.00 pm
Allianz Stadium
Perth Glory is the next team in line to have a crack at ending Sydney FC’s perfect start to the A-League season. Last week Sydney had to come from behind and rely on a controversial David Carney goal to overcome a determined Melbourne Victory by 2-1 at home.

Fourth-placed Glory should provide another stern test to Graham Arnold’s Sky Blues this weekend. Glory coach Ken Lowe will be back on the touchline following his two match banishment, and if there are any more controversial refereeing decisions, he may be less willing to offer the referees the benefit of his opinion.

Both teams go into the match boasting two of the best goal scoring records in the league. Sydney have Brosque, Bobo, Holosko and Carney to call on, while Glory has Keogh, Harold, Castro and Taggart to call on as well as the dangerous set pieces of Marinkovic.

Glory coach Lowe will likely set up his team to defend and absorb pressure, stifle the middle and hit quickly on the break, tactics which worked well in the win against Melbourne City. The Sky Blues, however, have greater balance between attack and defence than City and will prove a more difficult proposition for Glory. Glory will be without attacking full back Josh Risdon. Expect an exciting duel between these two outfits.