Melbourne-Thessaloniki sister-city relationship to be honoured 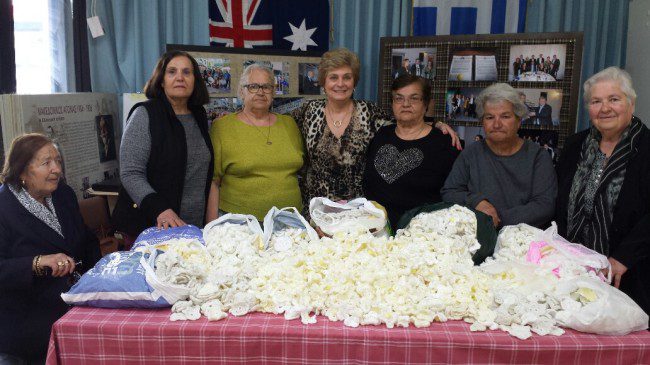 Thanks to overwhelming support, The White Tower Melbourne Project is nearing completion and ready to be decorated.

“The support from the community has been overwhelming, to say the least,” Thessaloniki Association vice-president Christina Despoteris told Neos Kosmos.

“The workshops across Melbourne, Athens and Thessaloniki have been very well-attended and supported.”

Ms Despoteris proposed the idea for the project earlier this year in July. While there have been many dances, festivals and lectures held to celebrate the sister-city relationship, she says it was time to create something tangible that could be presented to the city of Melbourne and handed down from one generation to the next.

“All these years we’ve been doing a lot of good things, but there’s never been anything long-standing; something that can be a lasting tribute to the whole relationship,” Ms Despoteris explained.

However, she didn’t want it to be a gift from the Greek community alone, but rather a cross-cultural and intergenerational project that the wider Australian and Greek community could take part in.

“I went out and spoke with various municipalities, ethnic groups and other organisations around the city. It was picked up tremendously,” she said.
The tower, which stands at 2.5 metres tall, is set to be decorated with 8,000 white crocheted laurels, which have been made by people across Melbourne and Greece.

Ms Despoteris particularly wanted to thank the women who attended the regular Thursday crochet workshop at the Thessaloniki Association Hall in Northcote, where they have been gathering to make the laurels one by one over coffee and chats.

“These ladies have collectively made over half, that is 4,000 laurels between them,” she said, adding that two women by the names of Vasiliki and Lina went above and beyond, making 1,000 laurels each.

Those involved in the project commenced decorating the tower on Wednesday, which is expected to be ready for its unveiling at Federation Square in Melbourne’s CBD on Sunday 27 November.

“I call on every lady who has contributed to this project to attend on that Sunday so that we can all present and gift it to the City of Melbourne. This has truly been a fabulous community project which I am very proud of,” Ms Despoteris said.

The tower will initially be housed in the Melbourne City Hall, following which it will make the rounds to the various communities across Melbourne that helped realise the project, including schools.