Magical South too strong for Altona 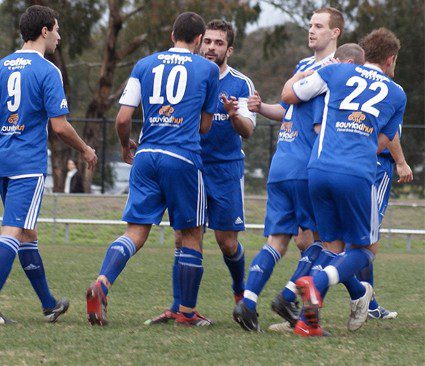 South Melbourne FC has propelled itself back into finals contention following a hard fought win against Altona Magic on Sunday at John Cain Memorial Park.

South started the brighter of the two sides with the home side peppering the Altona goal from the outset.

Despite the early dominance South could not muster up anything more than a half chance, with Kyle Joryeff, Joseph Youssef and Gianni De Nittis spooning speculative headed efforts into the prying arms of former South goalkeeper Andrew Sfetkopoulos.

It was not until the 35th minute when South had the best chance of the game so far, with Joryeff playing a deep ball to the back post to the open Daniel Vasilevski. With the keeper to beat, Vasilevski hit the volley on target, where Sfetkopoulos was once again able to simply capture the ball with ease.

However, it was Altona who would go ahead only moments later. On this occasion, a darting run from the left-hand side by Matthew Theodore culminated in the youngster slamming the ball at goal. Luckily for the Altona player, the ball deflected off the leg of South Melbourne defender James Stefanou and into the back of the net.

South responded just before the break, when a corner was cleared into the path of Joe Keenan, who was waiting just outside the area. Immediately Keenan hit the shot onto the target, where Steven O’Dor was smartly able to turn the shot away from the keeper and into the back of the net to level the scores at half time.

The goal seemingly spurred South on in the early stages of the second half, with the home side bombarding the Altona goal directly from kick-off.

In the 50th minute a brilliant ball by Daniel Vasilevski found the head of Steven O’Dor inside the area, with the defender able to put the ball past the hapless Sfetkopoulos in goal to give South the advantage.

South should have been two goals up moments later when former Heidelberg player Hamid Basma was released into acres of space. With the keeper only to beat, Basma hesitated and hit the ball directly into Sfetkopoulos.

Sfetkopoulos made yet another wonderful save once again in the 61st minue following a wonderful run by debutant Jason Ricciuti ended in the youngster having two of his efforts thwarted by the custodian.

The game however was sealed in the 83rd minute after a free kick was taking quickly to release Joryeff into acres of space inside the area. The Englishman then calmly slammed the ball into the back of the net to send the South faithful into delirium.

South now sit only two points outside the top 5 and will play Heidelberg United next Sunday in what promises to be one of the biggest derbies in recent times.