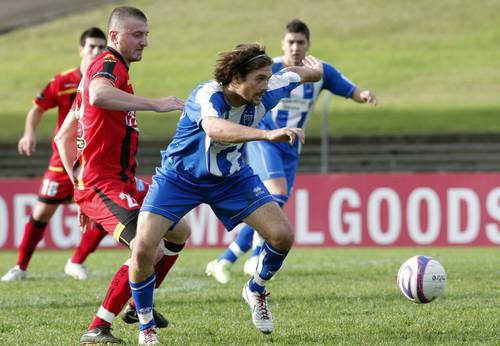 Round 19 of the NSW Premier League pitted rivals West Sydney Berries and Sydney Olympic together at Sydney Athletic Field.

These two sides have been languishing in the bottom half of the table and a win for either side would move them up the ladder and boost morale. After 90’ minutes of football, it was Sydney Olympic to leave the venue smiling with the Blues recording a 2-1 win.

During the first-half, the game was played in a very conservative manner as both sides chased down every ball and marked every player in order to prevent any attacking opportunities.

Unfortunately, this resulted in minor fouls from both sides and eventually yellow cards were issued due to the intensity of the game itself.

In the early minutes Sydney Olympic’s Dimitrios Petratos broke away and crossed the ball into the Berries box connecting with Iain Ramsay who headed the ball inches over the crossbar.

Moments later, West Sydney Berries’ Dimitri Zakilas had a clear shot at goal, attacking from Olympic’s left side of defence, beating everyone though shooting just wide of the post.

Sydney Olympic seemed to have more control in the opening 20’ minutes of the game as they worked hard in moving the ball forward edging ever closer into their opponent’s half, and this was illustrated by Olympic players such as James Monie and Petratos who continued to combine well when attacking down the West Sydney Berries left side of defence.

The goalkeepers from both sides were also involved throughout the game producing exceptional saves and making sure that they thwarted any certain goals.

The long ball attacks were continually being used in an effort to draw the keepers off their goal line, while shots on target from considerable range were another tactic used, however both keepers were constantly alert as they were up for the challenge.

In the 24’ minute the Berries had an opportunity to score when Jesse Pinto broke through the Olympic defensive line and placed the ball into the box allowing Glen Trifiro to take aim and shoot low.

Sydney Olympic goalkeeper Paul Henderson got down to his left, saving a certain goal, while at the other end, Sydney Olympic on 30’ minutes were awarded a corner.

Chris Triantis’ delivery into the box found the head of Matthew Mayora who headed into the top right-hand corner of the net, denied only by a fantastic save by Berries goalkeeper Nestor Tsioustas.

The first goal of the afternoon arrived in the 36’ minute when the Berries started to control the midfield. With quick passing, and good vision, they moved the ball into the Sydney Olympic penalty-area where Trifiro drew the goalkeeper off his line to slot the ball into the back of the net.

With the West Sydney Berries in the lead, the visitors regained their composure and pushed forward, however the game slowed dramatically as the first-half ended.

The second-half started with pace as both sides decided to play attacking football, moving the ball forward, creating space from the midfield and continuing to lob the ball long into their opponent’s back line. West Sydney Berries looked like they would score their second with good attacking combinations from players such as Zakilas, Trifiro and Pinto.

Sydney Olympic’s confidence from this point onwards grew as the likes of Luke Gearin, Iain Ramsay, Todd Bamber and Monie pushed forward and got more involved as a barrage of attacks produced continual problems for the West Sydney Berries.

Inevitably Sydney Olympic scored their second goal in the 87’ minute from Todd Bamber who came on as a substitute during the second-half, making an impact and eventually starting the attack from the middle of the park.

Bamber took aim from distance and scored with the ball slotting into the left side of the Berries net, leaving Tsioustas with no chance.

The game ended with both sides continuing to attack, pushing forward and creating space, however Sydney Olympic were more composed and dictated the final minutes, while the West Sydney Berries, who were desperate to equalise, failed to capitalise on opportunities as this tough and fast-paced game came to an end.