‘To Be Or Naught To Be’ − there is no question 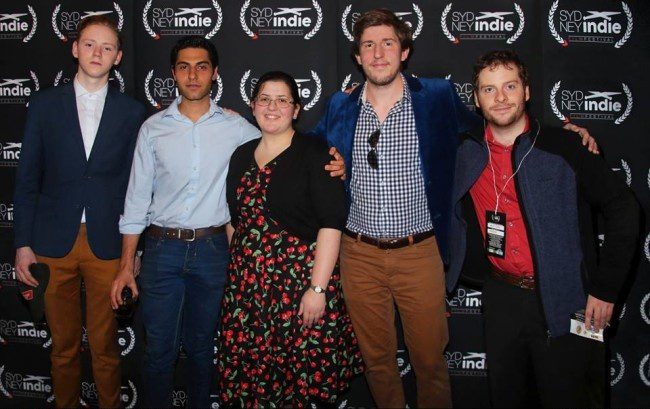 Set in a dystopian future where the population is strictly controlled, a father waits for his children to be born. In a deserted hospital waiting room, one man must ask himself exactly what he is willing to do to give his children a chance at life, any life at all. If one wants to have a child, they have to take a relative to the ‘Federal Bureau of Termination’ to be killed in exchange. Hospital staff and the FBT work together to maintain population levels, preserving what they fool themselves to be a utopia.

This, in a nutshell is the synopsis of To Be Or Naught To Be, a new short film based on the Kurt Vonnegut story of the same name (and featured in the Vema May 2016 edition), made by two young Australians of Greek descent − producer Artin Tsambazis (‘Artin John’) and associate producer Leon Coward, with the help of Artin’s father, John Tsambazis.

“My son Artin John, who instigated the project in Canada, got into partnership with a friend of his, Derek, who devised the script for the adaptation,” John Tsambazis tells Neos Kosmos.

“For me it was a struggle getting everyone together, the right people and crew for the project to bring it up to a quality, a standard that is acceptable to the public. That’s pretty much all my contribution there.”

Artin and Leon, now both in their early 20s, first met one another serving as altar boys at St George Greek Orthodox Church, in Rose Bay. Based in Sydney, Leon served as the film’s art director, and later also oversaw the film’s post-production, becoming its composer and main editor. Artin starred in and co-produced 2BR02B with screenwriter Derek Ryan.

“It’s true, the two of them met at church, they had dreams back then and somehow they made it happen,” says John Tsambazis.

“Leon is the ingenious mind behind the production of the project. He created a magnificent mural and various aspects of the graphics. The recognition is well-deserved. They worked really hard for three years.”

Having won Best Sci-Fi at the California festival, the duo’s short recently premiered at the Sci Fi London International Film Festival (patron Ridley Scott, director of Gladiator) and just won the best sci-fi award at the Sydney Indie Film Festival. 2BR02B has also been selected for 14 film festivals around the world, including two Oscar-qualifying festivals, has been selected as a semi-finalist twice, and has also received a nomination for best short film.

The star cast worked seamlessly together to bring Vonnegut’s writings to life and do justice to his experience as a POW in World War II and the 60,000 people who lost their lives in the Dresden bombings.

Vonnegut and his fellow American POWs were only saved by being 60 feet underground in a slaughterhouse meat locker. They were then required to help the Germans collect the remains of corpses which, due to their sheer number, were to be reduced to ash by flamethrowers. Vonnegut became a pacifist and his belief in the humanity of each individual remained a constant in his life. His story 2BR02B is a small but vivid portrait of a world in contrast to his own beliefs. As Vonnegut wryly notes in his famous book, Slaughterhouse 5, modern Dresden is built on bone meal.

Even though the adaptation seems to be totally devoid of hope, delving into a world where people are reduced to mere numbers and ending someone else’s life is acceptable in order to survive, the characters’ individual values offer the audience a valuable lesson, although they all fail to prevail.

The visual centrepiece and backdrop to the narrative is a 16-foot wide artwork − a mix of Art Deco and Cubism − painted in the waiting room, by Leon Coward, based on Vonnegut’s prose describing the mural in detail.

“It’s essentially a giant piece of propaganda,” he says. “The mural, called The Happy Garden of Life, is a false reality. When you see the painting and the bodies beneath it, you realise the painter has seen the truth of the dystopian reality.
“I was uncomfortable with borrowing from religious art,” he continues. “But the aim was to show a society which didn’t have that discomfort − it’s a society that has lost any sense of religious heritage and normal people are held up as gods. All of these choices build towards an effect, and whether the audiences notice them or not, they still absorb them and it helps them understand the story.”

Meanwhile, Artin John, who is based in Canada, is of course “stoked” for receiving yet another best sci-fi award from his hometown Sydney but “believes in 2BR02B”, hoping it will do better in more international festivals “and why not? Get a ticket to the Oscars”.

Artin John is now focusing on realising his new feature film and pursuing more roles in the US. The Bondi “good Greek boy” has starred in the fifth episode of The X-files. He has also appeared in Lucifer, The Returned, The Tomorrow People and Supernatural.