‘Portraits of Hellenes in Antipodes’

In her second volume, writer Vivienne Morris continues to document the stories of Greek Australians, preserving their memories for years to come Thousands of Greeks migrated to Australia in the 1950s and 1960s, but as the years pass and one generation takes over from the previous so too do the memories fade. Understanding their contribution to the fabric of Australian life firsthand, journalist Vivienne Morris set out to collect and record their stories and on Sunday released the second volume of her popular series Portraits of Hellenes in Antipodes.

Launched at Melbourne’s Greek Centre and co-organised by the Greek Australian Cultural League of Melbourne (GACL) and the Hellenic Writers Association of Australia, the book features 39 first and second generation expatriates from diverse parts of Greece and Cyprus, each successful in their field of work and contribution to the nation’s cultural development. 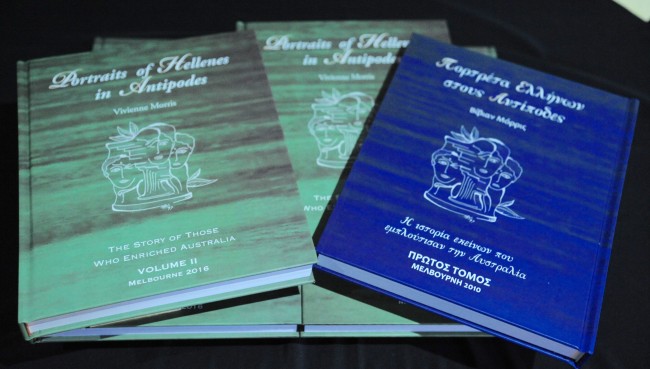 Compering the event was GACL president Kathy Alexopoulos, followed by an address by Dr Maria Herodotou, Program Coordinator and a Lecturer in Greek Studies at La Trobe University. It was historian and Secretary of the Lemnos Gallipoli Commemorative Committee, Jim Claven MA, however, who truly captured the spirit of the book.

Praising Ms Morris’ professionalism as a journalist and writer, he took the opportunity to acknowledge that she “has touched thousands” both with the book’s production, and in the lead-up having worked with various community organisations and projects.

“She has also been a tireless worker for the community and has led and participated in many important community organisations,” Mr Claven said.

“I believe that Vivienne’s writing and her community involvement is a window into her heart. For her interest is not merely that of a journalist meeting a deadline! No, she is interested and active in the life of the community itself, ensuring that its stories are preserved.”

And her commitment to the cause and integrity are a true testament to the finished product. In both compilations, accompanying images that bring the narrative to life, Ms Morris showcases each individual and their story with a care and sensitivity that could only be achieved with her years of experience and understanding of the Greek Australian community.

“I don’t know how many times throughout my own researches that I have heard families lament how they failed to talk to their parents or grandparents about their past. This is the sad story of all generations and all communities. Once many of us pass on, what remains is what is written in dry documents or [by] untitled photographs. That’s why we need the personal stories behind these documents and photographs – to bring them to life. We need the reminiscences of life as it was lived – to talk to us in the future,” Mr Claven explained.

“For all these reasons Vivienne’s book is a very important contribution to the documentation of the Greek community in Australia. And it is an important addition to the social history of Australia’s migration story as a whole. It is clear from these stories that the individuals have revealed their pride in their origins, no matter how humble or difficult.”

Among the stories are experiences of heroic resistance to the German and Italian occupation during WWII, others tell of the difficulty of making a living in postwar Greece, and many share the experience of facing limited opportunities in their beloved homeland, which would spur them on to venture to Australia and realise their dreams and those for their young families. While they are stories of success, the writer also captures the challenges and sacrifices made by hardworking families who forfeited the luxury of being at home with their loved ones and worked day and night.

The books recognise other emotional difficulties faced by subsequent generations who struggled with staying true to their origins while also desiring to take part in the more dominant Australian culture in their physical surrounds.

“The stories you have told are testimony to your family and your personal achievements and of how our Australian society has changed for the better,” Mr Claven said.

“This community involvement has helped not only preserve Hellenic culture in Australia but also brought the community together to help each other.”

President of the Hellenic Writers Association, Gerasimos Clonis, took the opportunity to dedicate a poem to Ms Morris, which was followed by a live interview with the writer led by Senior Producer of SBS’s Greek Program Dina Gerolymou.

Before the event drew to a close, Ms Alexopoulos thanked Ms Morris for her work and acknowledged the milestone in her career.

“It is a time to celebrate a wonderful profession and savour its remarkable output. It’s a symbol of the long and industrious years she has spent informing, researching, capturing those stories that matter – stories that create history,” she said.

“To me she has written memoires that encapsulate the essence of stories of the heart and the struggle for a better life.”

To purchase a copy of ‘Portraits of Hellenes in Antipodes Volume II’ by Vivienne Morris, visit the Greek Centre at 168 Lonsdale St, Melbourne or for more information call (03) 9662 2722 or email info@greekcentre.com.au