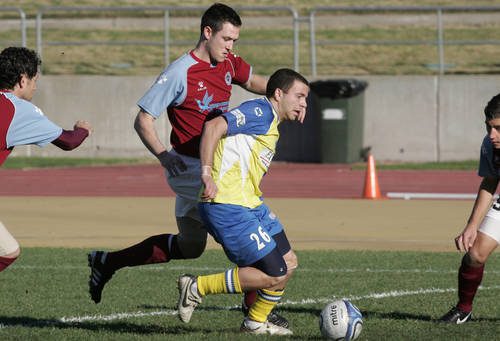 A.P.I.A.-Leichhardt Tigers have kept their finals aspirations well on track with a hard fought 2-1 win at the Sydney Olympic Athletic Centre against West Sydney Berries.

Goals to Anthony Hartshorn, and the match winner to Franco Parisi, either side of Glen Trifiro’s fine strike ensure the Tigers ambitions of championship glory remain on track.

The exceptional performance from Trifiro, and marvellous showing of goalkeeper Nestor Tsioustas were not enough for the Berries to deliver their supporters a home victory.

The visitors showed their intent from the opening whistle as Parisi slalomed his way past two defenders before Berries goalkeeper Nestor Tsioustas made a brave diving save at the feet of the Tigers captain.

Parisi was again in the middle of the action on 5’ minutes as he was sent through on goal. With the challenge of two defenders on either side of the striker, Parisi’s first time effort lacked precision and finished over the crossbar.

In the 7’ minute, Nick Rizzo broke free down the left-flank before delivering a cross to the back post. The delivery was perfect, though so too was Tsioustas’ movement off his goal-line to claim the ball.

Rizzo again tested the Berries goalkeeper 60’’ seconds later as he tried his luck from distance. The low-driven effort was well-claimed by Tsioustas down to his left.

The Berries only showings in the attacking third were created by the long ball out of midfield, though Ryo Maekawa was well marked by the Tigers defensive line as he failed to make much impact.

The first clear-cut chance of the afternoon arrived on 10’ minutes for the visitors and it was Parisi pulling the strings for the Tigers. A fine interchange between Parisi and Andrew Vitucci sent the latter through on goal, though once again a very alert Tsioustas was quick off his line to thwart any danger.

In the 14’ minute, Rizzo had the home-side feeling uneasy as he lined up a free-kick from a very promising position, just outside the penalty-area. The attacking midfielder’s curling effort had the Berries goalkeeper sprawling across his line, though the ball finished wide of the target.

The Tigers dominance continued with all the ball in the Berries half, as Rizzo again tried his luck from distance in the 23’ minute, sending his left-footed drive wide of the mark.

West Sydney Berries did create a fine chance of their own moments later as recent signing Glen Trifiro cleverly weaved his way into space before unleashing a venomous drive inches wide of the mark.

Trifiro was perhaps the Berries best in a difficult opening half for the home-side, the creative midfielder constantly looking to get onto the ball and create a chance for his side.

In the 27’ minute, Maekawa showed some trickery as he dribbled his way past two defenders before cutting the ball back from the right byline. The striker ran out of space in the end, though did well to win his side a corner, even though Jesse Pinto’s consequent delivery failed to create a goalscoring chance for the Berries.

A.P.I.A.-Leichhardt should have opened the scoring in the 35’ minute as Parisi’s header from close-range ricocheted off the crossbar. The Tigers’ captain rose highest to meet Mark Byrnes’ cross from the right, though his powerful effort failed to find the back of the net.

The Tigers dominance of possession finally did reap reward as Rizzo’s corner from the right picked out Anthony Hartshorn who sent his glancing header into the back of the net.

A.P.I.A.-Leichhardt Tigers captain Parisi closed the half with a curling free-kick from outside the penalty-area – the striker’s effort was well claimed by the Berries goalkeeper down to his right.

The opening to the second-half failed to provide any real urgency from either side, though the Berries introduction of John Tsironis did provide the home-side with another outlet in the attacking third. Tsironis’ strength and composure assisted the Berries in holding the ball, though the closest the side came to pulling a goal back was via Trifiro’s long-range free-kick – easy pickings in the end for Matthew Nash in the Tigers goal.

The Tigers responded with Stephen Kayes down the right-flank. The winger’s cross into the penalty-area picked out Hartshorn, though the midfielder failed to direct his header onto goal.

The visitors created another chance moments later following a swift counter-attack. Vitucci got forward down the right-flank and expertly cut the ball back onto his left foot before pulling the trigger and forcing Tsioustas into a fin reflex save.

Tsioustas was again very alert 60’’ seconds later as he was quick off his goal-line to thwart yet another Tigers counter-attack.

On the hour, Bishara Stephan was the next Tigers player to be denied by the in-form Berries shot-stopper. Stephan got in behind the Berries defence and, from an acute angle, forced Tsioustas into a fine diving save.

Against the run of play, the Berries drew level. The bright first-half performance from Trifiro was rewarded as the Berries player got in behind the Tigers defence, and slotted home a fine diagonal effort from the right.

The momentum was clearly now with the Berries, and Ryo Maekawa found the back of the net in the 66’ minute with a clinical finish from a tight angle, though the referee’s assistant had his flagged raised.

Maekawa was again on the attack 1’ minute later as he created a yard of space on the edge of the penalty-area, though failed to beat Nash with his drilled effort.
West Sydney squandered a golden chance in the 70’ minute as substitute Dimitri Zakilas was picked out on the edge of the penalty-area. The striker turned well, and lined up his effort, though with only the goalkeeper to beat, sky-rocketed his effort over the crossbar.

The Berries were at it again in the 75’ minute as the Tigers lost possession on the halfway line. Nathan Sherlock and John Tsironis interchanged passes, though the latter was called up for offside as the former held onto the ball for a second too long before distributing the ball.

The Tigers finally replied with a chance of their own as Rizzo provided the cross from the left and Vitucci attempted to head on target – the challenge of a Berries defender prevented the midfielder from getting the desired power behind his effort.

A.P.I.A.-Leichhardt did regain the lead in the 83’ minute following a fine build-up down the right-flank. With the Berries defence stretched, Franco Parisi received a square pass inside the penalty-area, and with only the goalkeeper to beat, finished with aplomb to secure the win.

The Berries best efforts late very nearly saw the side snatch a draw as Maekawa first, and then Tirovski, both had half-chances to snatch the draw all to no avail for the small Berries crowd present.

Courtesy of the Football NSW