‘If you believe in yourself, you can do anything!’ 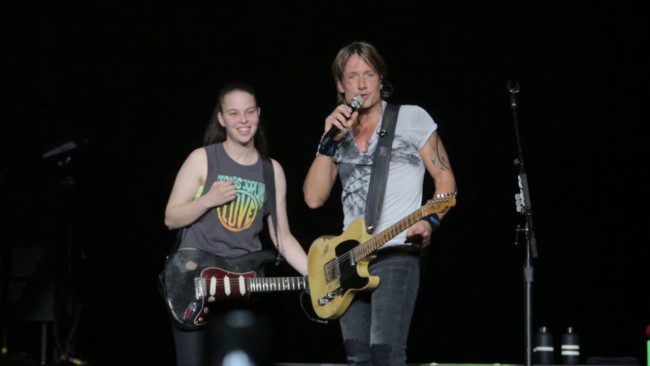 It was definitely an unforgettable moment for Greek Australian teenager Ellen Tefanis when she shared the stage for a wicked guitar duet with country musician Keith Urban, during his Ripcord World Tour concert in Brisbane on Saturday December 17, 2016.

Ellen Tefanis, originally from the country town of Port Pirie, South Australia, has been playing the electric guitar since the age of eight, but never in her wildest dreams did she envisage she would find herself on stage jamming with the talented New Zealand-born musician.

“It was an amazing night and I felt privileged to share the stage with such a great musician and supportive person,” Ellen says in an interview with Neos Kosmos.

It all started during a series of online Q&A sessions called ‘Ask Keith Urban’ prior to the concert date. The musician gave his fans the opportunity to ask him various questions and get his responses during the hour he was online. The 19-year-old took to Twitter and posted a video of herself performing a guitar version of one of Urban’s songs, asking the superstar if she could play with him at his Brisbane concert.

After uploading the video, the multiple Grammy and ARIA award-winner extended an invitation to the young musician to join him on stage at his concert.

“Dad and I flew out early so I could attend the sound check with Keith and the band and rehearse the Boy Gets a Truck song, but we ended up performing Good Thing because it had more guitar work in it,” explains the aspiring guitarist, who went on stage with Urban at approximately 10.30 pm.
“I had a blast and it was a dream come true. Keith is the most genuine person anyone will meet. He will give anyone a chance and he loves giving back. He is so thankful for his career and grateful for his fans.”

Offstage, Ellen and Keith talked about many things, mostly about music, and when the show finished and the teenager walked backstage to say goodbye to Urban, he told her how good she was and how amazing their performance was.

Ellen’s Greek grandparents migrated to Australia in the 1950s. Her Greek father George, who is also a musician, and mum Vivian, who is from an Italian background, own the local fruit and vegetable store in Port Pirie.

“When I was really little I wanted to follow in my father’s footsteps and become a drummer, but the minute I picked up my first electric guitar, it won me over.
“I knew it was the instrument for me, although there are limited resources when you live in a country town like Port Pirie,” explains Ellen, who has always had her family’s support in whatever she decided to do.
“Even my yiayia and pappou were always supportive of my musical career and wanted to know what was happening in my music life. Unfortunately, they are not with us anymore,” says the young guitarist, who has also just completed her first year at Adelaide University, where she is studying a Bachelor of Arts/Teaching double degree specialising in history and music.

Ellen plans to continue with both her music and teaching career, and doesn’t look like she is in any real hurry to decide which path to follow.

“It really depends on what the future holds. If my music career doesn’t take off I will be more than happy as a teacher,” admits the talented teenager, who is still in awe over sharing the stage with superstar Keith Urban.

“I am forever grateful to Keith and if I’ve learnt something from this experience, it’s that if you believe in yourself you can do anything.”

To watch the full video of the two talented musicians jamming together, visit www://twitter.com/KeithUrban/status/809565779402182656