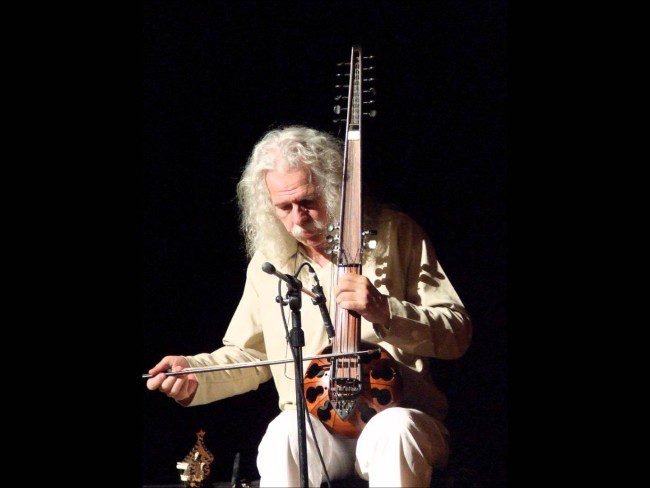 Among the grand names taking part in this year’s inaugural Bohemia event, to be staged at Collingwood Town Hall on Saturday 4 March, is Irish-born, Crete-based musician Ross Daly.

Daly has travelled throughout the world, mainly in the Middle East, central Asia and the Indian subcontinent, studying various forms of local music traditions, and is famous for his ability to champion the Cretan lyra beyond perfection, creating his own musical language which encompasses traditions from the east, from India through Persia to Turkey and Greece.

Now the Cretan lyra master is coming to Melbourne with his trio, which comprises fellow Cretan lyra player Kelly Thoma and Australian musician Paddy Montgomery, to immerse us in the beauty of traditional Greek and Byzantine sounds influenced by other eastern cultures.

Daly will perform alongside Australia’s Archie Roach and Istanbul’s Mercan Dede − two legendary cultural icons who have inspired generations with their unique ability to unite old and young, ancient and modern, east and west, black and white.

Having released more than 35 albums of his own compositions and of his own arrangements of traditional melodies collected during his travels, Daly will showcase his art, featuring a new type of Cretan lyra he designed back in 1990 which incorporates elements of lyraki, the Byzantine lyra and the Indian sarangi.

The acclaimed musician is also famous for his contribution to preserving the area’s musical culture as well as for establishing Labyrinth Musical Workshop in 1982, a ground-breaking educational institution and one of the most respected series of seminars and master classes in Europe, located in the village of Houdetsi, 20 kilometres south of the capital city of Herakleion.

There, more than 250 instruments Daly collected during his travels are on show, and hundreds of students from all over the world come to study with renowned international teachers of modal music each year.

Meanwhile, Indigenous Australian singer and songwriter Archie Roach will offer Bohemia fans another one of his mesmerising and awakening shows, preaching for love and tolerance beyond race, religion, gender and ideology.

A storyteller in the tradition of his ancestors, and a nationally popular and respected artist, he headlines the event with Turkish-born, Montreal-based musician, producer and DJ Mercan Dede, renowned for his one- of-a-kind ability to combine the hand-made with the electronic.

Both as Mercan Dede with his Secret Tribe, and as his alter ego DJ Arkin Allen, Dede has performed at diverse events in almost every corner of the world. In 2005 he became the first Turkish artist to reach No. 1 of the world music charts. Producing under nine different names, he has released more than 100 singles worldwide, as he believes that nothing should stand between sound and the ear, including the artist himself.

Together with his group Secret Tribe, Dede will hover at the side of the scene, behind his turntables and electronics, occasionally picking up a traditional wooden flute (ney) to float in sweet, breathy melodies, while masters of the kanun (zither), clarinet, darbuka (hand drum) and many other instruments will ornament his grooves and spin magical, trance melodies to match the whirling of the group’s spectacular dervish dancer, Ceyhun Varışlı. Mercan Dede is rightly recognised as one of the most creative and unique artists in the electronic and world music scenes today.