As Sydney sizzles, a hot line-up is expected for Sydney’s Greek Fest

As Sydney prepares to go Greek this weekend, Billy Cotsis gives a rundown of the exciting festival program in store 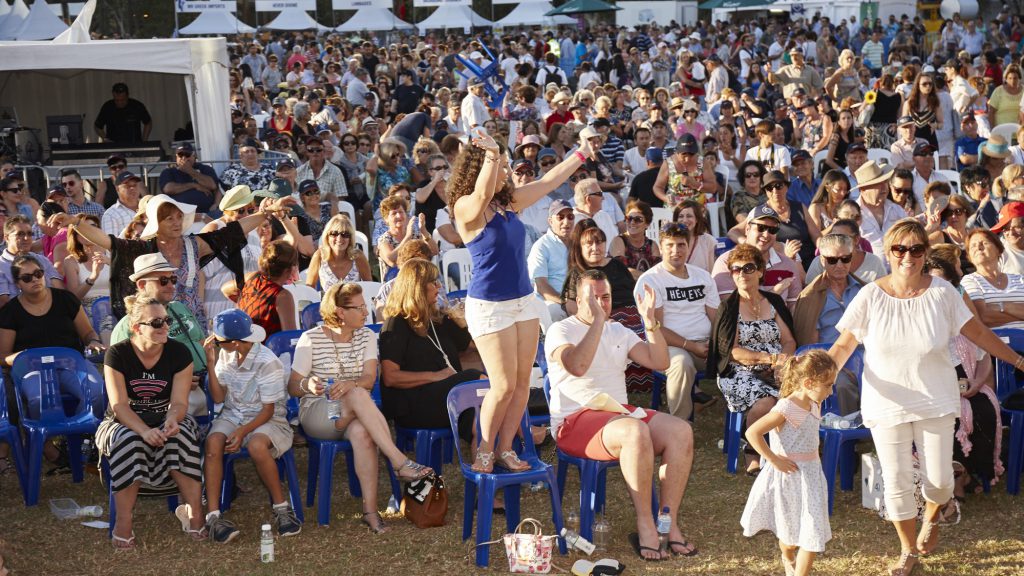 Arguably the hottest summer that Sydney has experienced, it’s about to get even hotter, with Glykeria headlining Greek Fest at Darling Harbour. One of the greatest singers that Greece has ever produced, Glykeria will be on stage on Sunday 26 February to keep audiences tapping and entertained.

Glykeria’s career spans more than three decades. Having distinguished herself as an important voice in Greek music with her unique interpretation of songs by composers like Hadjidakis, Theodorakis and Loizos, her records have sold across Europe, the Middle East and in many other parts of the world.

The 35th Greek Festival of Sydney and NSW, which was officially launched on Thursday night at the ever-supportive The Grand Roxy, Brighton, is the biggest multicultural festival in Sydney. Commencing with Greek Fest this weekend, 25 and 26 February in Darling Harbour, the public will be treated to activities for kids, Greek food including souvlakia and drinks, market stalls and performances.

Harry Danalis, president of the Greek Orthodox Community of NSW, told Neos Kosmos that this will be “a taste of Greece as the foreshore of Darling Harbour comes alive. This year’s program is new and exciting, sure to showcase the richest display of Greek culture in Australia”.

It’s a sentiment echoed by festival chair Nia Karteris, who is “pleased with the exciting array of events and initiatives that are on the 2017 program, which will take us though to Sunday 7 May”. As always, Nia was quick to point out that the festival can only succeed with the support of sponsors such as Delphi Bank and Qatar Airways. Their generosity enables the festival to shine for nine weeks, featuring approximately 30 events.

Neos Kosmos asked some Sydneysiders for their picks from the program. A number of exciting initiatives came up in conversation over frappe at Belmore and other suburbs where the Greek population can be found.

A real highlight is expected to be the George Ellis-led music tribute to Mikis Theodarakis at City Recital Hall on Friday 28 April. For those familiar with the renowned composer, you will be in for an incredible evening that will inspire you to revisit Greek musical masterpieces.

Hellenic Art Theatre will be focussing on children and families with the Stavros Economides directed Ο Καραγκιόζης στην Αυστραλία (The Karagiozis in Australia). Evelyn Tsavalas told Neos Kosmos “the crisis in Greece has led to the new wave of migration to Australia; one of these ‘new migrants’ includes everyone’s favourite barefooted and hunched back folklore hero – Karagiozis!”. The production will run throughout March.

Costa Vertzayias, one of the actors from the theatrical production, will also be involved with a lecture on Greek communities that exist and those that have become extinct in the last century. Having travelled to many of those communities, this eagerly-anticipated lecture is expected to be packed when it takes place on Wednesday 22 March at the Greek Community Club.

Another pick, A Taste of Lesvos, is a culture and trade show being held at Mytilene House on Sunday 2 April. With all the publicity the island has had in recent years over refugees and migrants, this is a great opportunity to showcase Lesvos.

For fans of poetry and spoken word, do not miss out on seeing Luke Lesson on Friday 17 March. The show will feature a selection of poetry from a career spanning more than 10 years and numerous countries, with Luka giving audiences a unique insight into the stories behind his work.
Music fans, there’s plenty on offer, with a real standout on Sunday 9 April being Apodimi Compania direct from Greece and playing the music of Thrace and Crete.

And for those who cannot get enough of Greek milk bars … two public presentations (illustrated with numerous historical and contemporary photos) are also being presented by Effy Alexakis and Leonard Janiszewski, who enthused, “both are at famous Greek cafes!”.

Gundagai in country NSW will host the presenters on Saturday 11 March, and then Paragon Cafe in Katoomba will also hear about ‘Greek Cafes & Milk Bars of Australia’ on Saturday 1 April.

For more information on the nine-week cultural program and to book tickets to selected events, please visit www.greekfestivalofsydney.com.au

* Billy Cotsis is the author of ‘From Pyrrhus to Cyprus’.