Only 17, and still at school but could he be the next great winger to come of Dutch football’s assembly line? 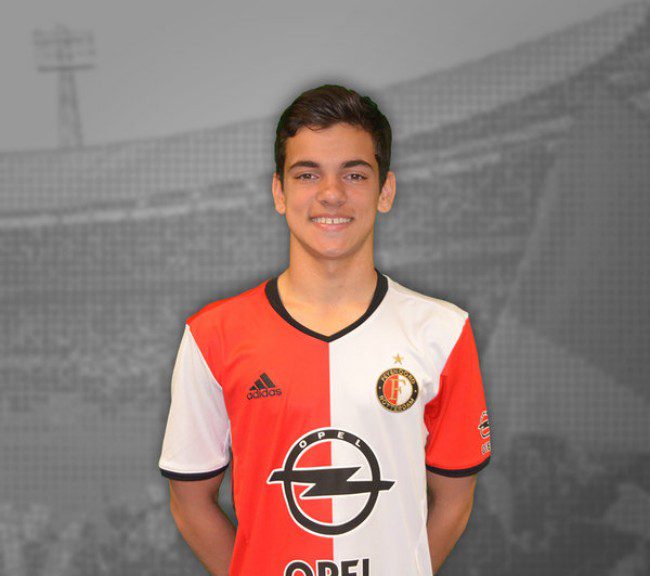 Robin Van Persie, Arjen Robben, and Marc Overmars are just the tip of a very large iceberg when it comes to the amount of world-class wingers Dutch football has produced over the years.

While it’s certainly too soon to say whether Yianni Barberoglou will be the next one that comes off the assembly line, it helps that the 17-year-old is at Feyenoord, a renowned football factory.

Barberoglou is a second-generation Greek Australian: his parents were born in Australia after his grandparents on both sides emigrated from Greece. Yianni grew up in the Melbourne suburb of Doncaster and his father was a keen South Melbourne supporter. Yianni says his first step as a child was quickly followed by a kick of a soccer ball and ever since that first strike, his life has revolved around playing the round ball game.

“Football to me was a way of life rather than just a game,” he says, speaking to Neos Kosmos from Holland.

“My fondest memories are going to Olympic Park to watch Melbourne Victory play.
“I believe my experience is unique as I have had a very different development plan compared to most Australian youngsters. I try to surround myself with the best in order to get the best out of myself. Part of this consists of using cross training between different sports such as Muay Thai kick boxing, rugby power training, aquatic work and athletics. I pride myself on the hard work I put in, as its helped me develop my game to modern day football and its requirements.”

“I had been trialling with several clubs in Holland when Feyenoord heard about me through a trainer,” Yianni says about his dream European move.

“I was then asked to have a trial with Feyenoord. I was thrilled and honoured to have the opportunity to do so. I trialled with the U19’s age group and after the first session I was offered a spot at Feyenoord. It was my first step into the world of football, and I was fortunate to enter it with such a big club. After the week finished, I decided that it was one of the most intense weeks of my life so far. To be really doing it, it was overwhelming.”

Barberoglou is following in the footsteps of another Australian winger who played at Feyenoord, former Socceroo Brett Emerton. When Emerton moved from NSL side Sydney Olympic to Feyenoord in 2000, the £400,000 transfer fee was considered a massive outlay for an Australian footballer at the time. Barberoglou will do well to emulate the career that Emerton had in Holland. During his three seasons with the Rotterdam club the 95 capped Socceroo played close to 100 games and won a EUFA Cup Winners medal.

Barberoglou says that during his initial moments with the 14-time Eredivisie League Champions, he was star struck by the former greats he met during his first seven days at the club.

“The first week I had with Feyenoord was exhilarating,” he says.

“When I first entered the change room it was filled with Dutch national team players and I realised this was the level I was expected to play now. Everyone at the club was very welcoming and glad to have a kangaroo in the change rooms.
“Throughout the week, I met the players and coaches including footballing legends such as Roy Makaay from Bayern Munich as well as one of Feyenoord’s greatest wingers, Gaston Taument. It was still a shock to me to have signed with a club which had honed the likes of Robin Van Persie, Henrik Larsson and Eric Wijnaldum, just to name a few. At this point in time, life couldn’t get better.”

When he isn’t putting in the countless hours on the pitch, Yianni is also taking part in what most 17-year-old’s around the world do – finishing his final year at high school.

“My week consists of six training sessions and a game on Saturday and when I’m not training I am working my way through Year 12,” he says. “I have a few coaches who range from the head manager to the athletics and power training coaches. The coaches’ feedback has been constant throughout the season including compliments and constructive criticism.”

While his main position is playing out wide, Yianni says he can also play in other areas on the field.

“I am a left and right winger as well as a centre attacking midfielder,” he says. “I see myself as a technical and creative player. My best attributes are my touch, dribbling and creativity with both feet. I am quick with the ball and try to move the ball around as fast as possible. I would like to improve on my strength the most, although I work on improving every part of my game daily.”

Barberoglou says that after almost 12 months in Holland, he is now used to his new surroundings and feels that he has adapted to the Dutch style of football.

“I have been at Feyenoord now for nearly for a full season and I am working my way through,” he says.

“The environment gets easier with time and in terms of competing with others, it never ends. It’s gotten to the level where I cannot think about obstacles but must meet each challenge as it rises.
“I have been playing in the U18s. It is a very physical level of football which includes a lot of running. We play against U19 squads from around Holland. The set-up is structured and based on how to best develop the players. I believe that due to the fact that football is its number one game and because of its rich history, Europe has a vast array of clubs and opportunities for everyone to gain from.”

While Yianni has been able to absorb what is required on the field, becoming comfortable off it has been a challenge, especially learning to come to grips with a new culture.

“The language was a definite barrier as it was extremely difficult,” he says.

“The Dutch tongue is a very interesting one to adapt to. The weather was slightly colder and gave me the first experience of training in the snow. I’d like to say that I have a very strong supportive network from all my family and friends. I am grateful for having my mum with me as it helps significantly.”

“Of course,” he says. But don’t discount Yianni playing for the Socceroos either as he says that one of his ambitions is to play international football for Australia.
“It would be an honour,” he says. “To be able to represent the country you grew up in is an honour. Any young Australian footballer dreams of putting on the green and gold and hopefully one day I’ll be able to do so.”