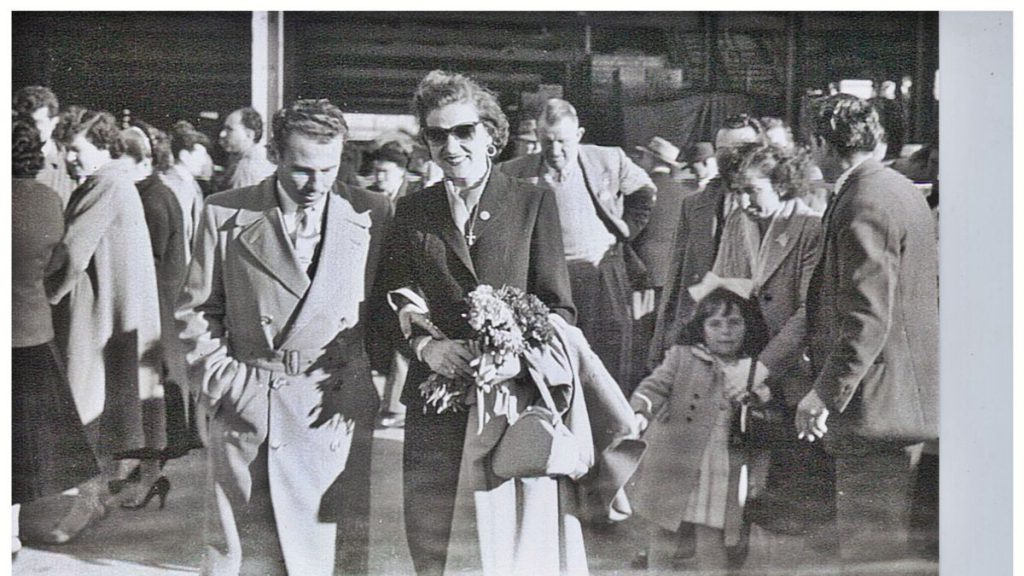 ‘Bride-to-be’ Anna meets Demetrios Boravos for the first time. He was in Adelaide from 1954 he came to Melbourne to greet his fiance and travel back to Adelaide. The couple was married 27/10/1957 in Adelaide.

This year marks the 60th anniversary from the day 900 Greek single women known as ‘nyfes’ (brides) left their homeland and embarked on their journey to Australia in a quest for a better future.

To pay tribute to those women, the SA Council for the Greek Cultural Month (Festival Hellenika) and the Panrhodian Society of SA Colossus, in collaboration with educator Peter Photakis have scheduled a special event in Adelaide to reunite the brides of 1957 and to listen to their incredible migration stories, in an attempt to shed some more light on a post-World War II era that saw a stream of young women migrating to Australia to start their own families with their future husbands. Husbands whom they had never met before.

“Those young women left their families and homes behind to come to Australia and meet their future partners on the promise of a new and better life,” Sabina Kelakios, a member of Festival Hellenika told Neos Kosmos.

Greek-born educator Peter Photakis, who – together with his mother and two brothers – was also on the ship ‘Begoña’, that arrived in 1957 at Port Phillip Bay in Melbourne, will be the keynote speaker on the night of the event. He will share his own migration story, which starts at the tender age of eight years, when he left the village of Sianna in Rhodes to come to Australia. 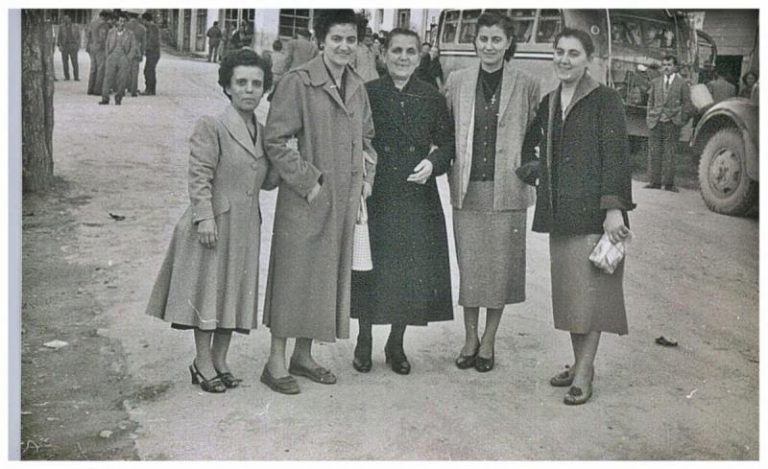 A departure shot from Καστοριά of bride Anna, with her mother and three of her six sisters. (L-R) Maria, Anna (the bride), Sofia (her mother) and sisters Kiriaki and Melisini.

“Although I was little, I have many fond memories of the journey and I distinctively remember wondering why there were so many young and beautiful women on ‘Begoña’.

I actually thought those women were neraithes and that’s what I used to call them until one day, near the end of the journey, my mother told me that my neraides were brides, who were married via a photograph. That confused me even more,” recalls Photakis.

The memory of those young women holding photos of their future husbands stayed with him for years. Photakis often wondered what had happened to them; 42 years later he began his own research project in quest of the nyfes.

“I started by looking for the passenger list of the ship, which led me to the Australian Archives. I also visited their offices in Melbourne and actually held and read the log book in my hands. The journey back in time began.”

During his research, Photakis found and met some of those brides and started documenting their stories in a book so that each of their families could read of the arduous journey they had made so many years ago.

“Greeks, as migrants, are found in every corner of the world and have made a great contribution in their adopted countries. But we never forget our place of birth. The word diaspora means living away from your homeland. There are approximately 11 million people living in Greece and about five million in the diaspora.

“Each bride will no doubt have good and bad memories of the odyssey they made so many years ago. Through my research, I have found that some of the brides in South Australia have met a few times and even had a 40- and 50-year reunion.

“I would like the project to be successful because the alternative is that all these stories and related information will be lost forever, and our future generations will never learn about their Greek heritage,” explains Photakis.

In the second part of the night’s proceedings, the guests will have the opportunity to hear directly from some of the nyfes about their adventures during their 30-day journey and their arrival in far-away Australia, where they finally got to meet their future husbands.

Excited, nervous yet hopeful for what their future would hold, some of those women ‘committed’ to their husbands and went on to create their own families, unlike others, who ended up in tears, alone and disappointed upon discovering what awaited them at Port Phillip.

Some of those young girls returned to Greece.

“We are very excited and grateful to be bringing these women together and listen to them share their stories with us, as well as poems they wrote on the ‘Begoña’ expressing feelings and hopes together with the uncertainty and the pain of leaving Greece and their family behind,” says Sabina Kelakios who will coordinate a discussion on the night and is also collecting material for a photo exhibition with images never shown in public before.

“The first few years were really hard. Foreign country, foreign people and the whole world upside down for us young women who did not even know how to speak the language,” recalls Harikleia, one of the brides.

“All I remember is everyone saying to me is that it will take time but eventually I will get used it.
“The years went by and Australia who started as our stepmother, then became our mother.
“Thank God for that!” Harikleia says.

Journey in the Ship Begoña – 60 Years Then and Now takes place on Wednesday 29 March at 7.00 pm, at the Panrhodian Society of SA Colossus Hall, 148a Henley Beach Road Torrensville, SA. Admission is free, bookings are not required.

More information on the event can be found at www.festivalhellenika.org.au.