These marbles are alive… or are they?

The forgotten monument in honour of the Thessaloniki-Melbourne city sisterhood 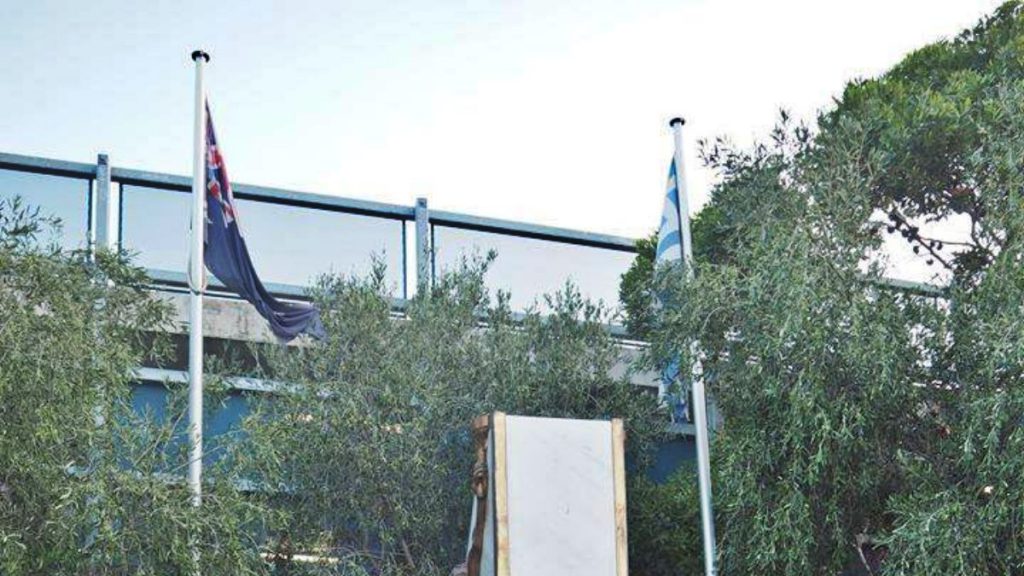 He is absolutely right. Rust does not assail Greek marbles, wherever these are situated. Instead, despite their ability to blindingly reflect the sun, in the Antipodes, they acquire a tendency towards the opaque and to merge silently with the ashen background of grey, Melbournian pretermission.

One of those forgotten marbles, is the one most recently installed. Mouldering away In the Lonsdale Street “Greek” precinct, placed strategically close to the shops, now gone, that once comprised the hub of Greek life in Melbourne’s CBD is the monolith dedicated to the sisterhood of Melbourne and Thessaloniki. The monument, an initiative of Melbourne’s Thessaloniki Association is called White Tower, which appears to be a vociferous, and probably the only truly committed proponent, of the stilted sister-city relationship. It was triumphantly installed amid fanfare, by controversial Thessaloniki mayor Panayiotis Psomiadis in 2007. One side of the monument bears a relief, in early Byzantine style, of Saint Dimitrios. The other, predictably, bears a relief of Alexander the Great holding what appears disturbingly to be a butcher’s knife. Once upon a time, the black inscription upon the monolith advised the wayfarer that both images were based on mosaics of old. There are no images remotely linking Thessaloniki to Melbourne on the monument and we can only speculate that it is possibly the act of replicating a mosaic itself, in bas relief, that provides the connection with Melbourne, implying that its society forms a mosaic in its own right, one that ironically enough, defies being set in stone.

It is hard to defend this contention with any confidence, for in just a decade, the inscription has faded to the point of near-illegibility. Indeed it is not at all certain that the part of the inscription that informs the viewer that the monument was installed during the time of Psomiadis reign will endure beyond the year. Instead, there it stands, hidden in plain sight, before the vibrant Asian businesses that fringe the precinct. Though white and gleaming, passersby rarely spare it a glance. It is a ghost, of a past and of a relationship, no-one cares to remember and whose continued existence frightens nobody.

Another Greek ghost haunts the environs of the city of Stonnington opposite the Greek Orthodox Church of Helen and Constantine. The memorial, remarkable in how its socialist realism aesthetics mirror those of the Soviet period, comprises triangular marble-like panels, bearing two bronze reliefs of Reifenstahlian torch-bearing athletes on either side. The installation is surrounded by a low metal barrier which is broken in one place, two flagpoles upon which the Greek and Australian flags flap desultorily, and is fringed by a row of olive trees and a grove of abandoned shopping trolleys. Unlike the Psomiadis monument, there exists no inscription or plaque to enlighten us as to when and why the aged pile was erected. Instead, the sole form of writing upon the monument is a scrawl of graffiti across its front, branding the ghost of the past for the present. Nonetheless, the Olympic Rings emblazoned upon the torches borne by the athletes hint at a connection between Greeks, international sport and Melbourne.

This particular ghost is possessed of peripatetic tendencies. According to local residents, it was once located at the Malvern Road access of the park in which the Prahran swimming pool is situated. However, it moved to its present solitary position, as it had fallen victim to vandalism. Now it poignantly whiles away the hours to oblivion; forlorn, and forgotten, the significance of its strong, virile and noble brazen male caryatids incomprehensible and remote to a latte-bearing, iPhone 7-wielding generation at large, and to the old ladies who enter and exit the church frequently without sparing it a glance, alike. Nonetheless, it would be fascinating to learn of the existence of any Lady of Rho-like figure who secretly tends to the olives and raises the flags upon their flagpoles, unobserved by the local populace, guarding her own Thermopylae, aeons after the Persians have passed us all by and have been forgotten.
That is not to say that all of our mouldering spectral piles signify oblivion. The marble monument at the Axion Estin monastery in Northcote has admittedly seen better days. Bearing, in bas relief, the image of a foustanella-clad Evzone clasping the hand of an Anzac who is wearing a bizarre elongated sun-visor, underneath a pediment atopped by busts of a helmeted Pericles and an equally helmeted Alexander, it defies inscription, for the Melbournian weather has caused the once-gilded Greek buzzwords of peace, civilisation, freedom and democracy to fade away, most likely in sympathy with the erosion of these values in the Brave New World of our times. Despite this, and its increasing fungal discolouration, the Axion Estin monument serves as a backdrop and a place of reference for the commemoration ceremonies of multitudes of local Greek organisations, all of which have something to do with war, but little if anything, to do with their life in Australia, though it could be argued plausibly that commemorating various Greek regional war events, IS a feature of Greek Australian life. Here then, dilapidation is not a consequence of obscurity but rather, comfortingly, of wear and tear. The Greek Australian war memorial in the gardens close to the Shrine of Remembrance is used nowhere nearly as frequently, except to mark grand and solemn national commemorations, and is thus as immaculate as it is unnerving.

The Rye memorial to the Greek and Australian dead, smart, neat, and luminous on a summer’s day, featuring a plinth poised upon a mosaic of the Greek flag was erected by the Rye Greek community in 1995. Despite its relative age, it is lovingly tended and serves as focal point for the commemorative ceremonies of the local Greek communities of the Mornington Peninsula. If one were to prognosticate, one would venture to feel confident that this memorial will fend off ghosthood for at least another generation, for the Greek Melbournian urge to retire, or seek relaxation in Rye and its environs is a particularly enduring one.

A similarly enduring status must be afforded to the monument erected by the Cretan Brotherhood of Melbourne, to Crete’s most famous son, Eleftherios Venizelos. Every time I drive down Nicholson Street, the architect of the Greece of the two continents and five seas greets me. I know that in the years to come, subsequent generations of Greek Australians will struggle to recognise him or appreciate what he means to us. For this reason, I propose that the land upon which the monument is placed becomes the subject of a restrictive covenant, so that, regardless of whatever use the adjoining building is put to in the future, Eleftherios Venizelos can gaze upon our descendants in perpetuity, a symbol of the failure of our own Μεγάλη Ιδέα, this being the deeply held belief that we could reconstruct and perpetuate, the lives our ancestors left behind prior to their arrival upon these shores.

Pretermission, the act of forgetting, is especially haunting when it comes to monuments. For to forget a monument which has been erected in order to keep you from forgetting, negates its entire purpose, rendering it, a spectre. It is for this reason, while we as a community, are in construction mode, that we should consider building a monument to commemorate those monuments we have erected, which have lapsed from our memory. And while we are at it, during our community’s vibrancy, we should also build a monument to commemorate ourselves, lest we forget. After all, it worked for the Pharaohs …