‘Greece is a small superpower in the Balkans’

During his visit to Australia, Nick Larigakis, President of the American Hellenic Institute shared his views on Greece’s geostrategic positioning in the current political environment 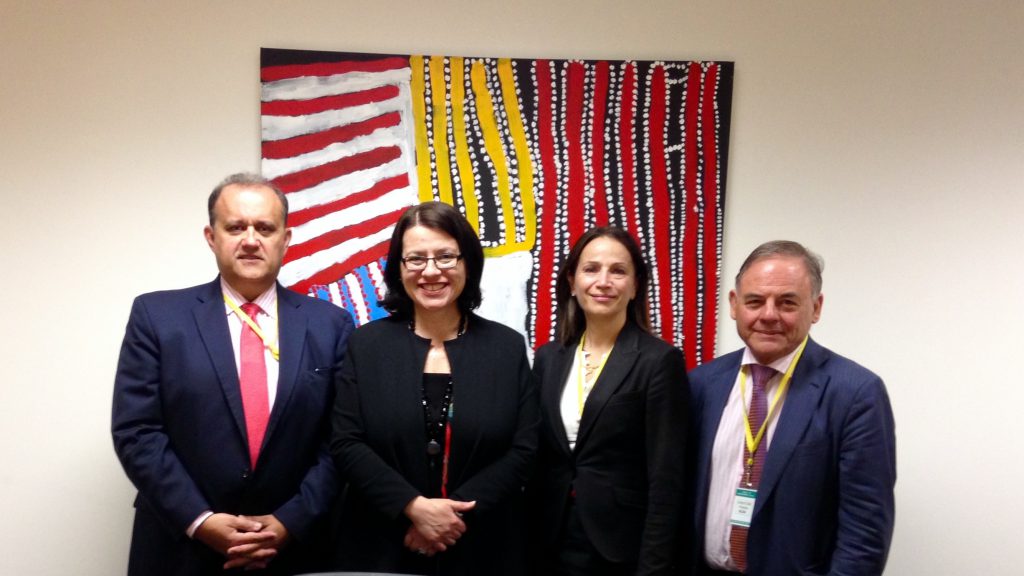 Nick Larigakis never gets tired of discussing the issue that’s close to his heart: how to best promote relations between Greece, Cyprus, and the US. As the President of the American Hellenic Institute, he’s been a champion of this cause. He recently arrived in Australia to meet with community leaders and politicians, discussing with them how, “at the moment, Greece and Cyprus are the frontline states for the promotion of peace and stability – as well as the US interests in the eastern Mediterranean”. Which was a perfect starting point for his Neos Kosmos interview on Greece, Turkey, international politics, and the diaspora.

Do you think that Greece is embracing its role as a player in geopolitics?
Yes. For the first time Greece itself emphasises its role. Greece is a small superpower in the Balkans. When you consider that it has 156 F16 aircraft, this is the fifth largest air fleet in the world, in a country with a population of 11 million people, slightly more than New York City. Statistically, Greece is better armed than Turkey, which has 220 F16, but a much larger population – which, of course, means more soldiers on the ground. This has nothing to do with conflict. It means that there needs to be a balance, and there must be an end to the illegal air and sea violations. The international community has to stress this, especially the European Union and the US.

Greece’s borders are the EU borders to the east and the country is the most reliable NATO ally in the region. Turkey has never been a faithful, reliable ally. They have no relations with anybody in their borders, they have extremely unfriendly relations with everybody, they helped to give birth to ISIS, they have facilitated ISIS in every possible way, they created the open border policy with Syria, which flooded Turkey with refugees, then Turkey looked the other way, as refugees flooded the Greek islands, and caused tremendous problems for Greece at a time when the country’s economy is not doing well at all. What’s more, Turkey continues to fight the only elements on the ground who are fighting ISIS, the YPG Kurds, because they consider them to be terrorists. This is a NATO ally which has been a beneficiary of tens of millions – if not hundreds of millions – of US military and foreign aid over many decades, but when we asked them something they never give it to us.

Do you see the US change policy towards Turkey?
I do. In some of the discussions that I’ve had with US policymakers, they do understand that this is very problematic and I think that this is one of the reasons why you see them now gravitate a little bit more toward Greece and try to upgrade their facilities in the base of Souda and potentially looking for other areas where there might be military facilities that would be alternatives to the Incirlik Air Force base.

How do you see the Trump administration, from this standpoint?
We don’t really know completely yet. We’re still within 100 days of this administration and there are still a lot of areas they have not filled in key positions, especially in the State Department and the National Security Council. Once these positions are filled, we will engage these people for a better understanding of where the whole thing might be going. However, it was very disappointing that we saw secretary of State, Rex Tillerson, visit Turkey recently. Prior to his visit I wrote a letter to him setting forth certain arguments and points for him to be aware of and to raise with his counterparts when he meets with them. But when he read a statement, he was very complimentary in his language towards Turkey. That concerns me a little bit. We don’t know what was said behind the scenes. But I do know that during the recent visit of the Greek Minister of National Defence, Mr Kammenos, to Washington, on 23 and 24 March, he met with the Secretary of Defence and it was an exceptional meeting, after which the Secretary of Defence applauded Greece for its initiatives.

At the end of the day we’re still not sure how the whole thing is going to play out. I still think there’s going to be cooperation between Greece and the US as it has happened in the past, and will continue to grow especially now that the energy component has really put Cyprus on the map. They didn’t just wake up five years ago and decide that Cyprus was there; the energy changes the dynamics of the region. It is very important for the US to have an alternative energy source to the Russian gas monopoly into western Europe.

Apart from geopolitics, what is your opinion on Greece’s prospects, given that the country is still in recession?
Our role at AHI is not to intervene in Greece’s internal issues. As American citizens we promote a policy that is best for the US interests in the region, we emphasise that. But nothing happens in a vacuum and the economy issue has sucked up the air during the past five years. So we’re looking at what we can do to help, as an institute. In the US government structure there’s an agency called the Overseas Private Investment Cooperation (OPIC), created to help stimulate and promote investment in under-developed and third world countries around the world. It provides risk insurance, favourable interests, and other incentives for American companies to go and invest. We wrote to them and they wrote back saying that Greece is not qualified because it is a developed nation and a member of the EU. We kept on insisting, because we did our research and found out that Portugal, Malta, and Northern Ireland were involved in OPIC projects. So at the end of the day this is really a political decision, not an economic decision. We engaged our friends at Capitol hill and after a year and a half of back and forth lobbying, in July 2016 we got a letter that Greece is now part of the OPIC world. So, we created the mechanism, a good vehicle to promote business activities in Greece.

Greek Americans would line up and want to invest in Greece if conditions were appropriate; but Greece has one of the highest corporate tax rates in the EU – and what’s worse, it’s a corporate tax rate that changes all the time. Also, [with] capital controls still in place, there’s no good liquidity in the banking system, there’s still a lack of transparency in many areas, unions in certain areas hold investors hostage and legal matters take years to resolve. All these factors do not create a good environment for someone to come and invest in the country.

Do you think that the Greek diaspora should have more of a say in matters of Greek policies?
AHI does not have an official position on this issue. But personally, I don’t believe that the diasporas should vote. I’m afraid this would cause even larger division among us, as we’d see Greek communities campaigning for politicians and parties in Greece.

What does being part of AHI mean to you?
I’ve been doing this for 30 years. I feel blessed to be in a position to try and help promote Hellenism. It is [known] without question, anywhere you go around the world, that the Greek community has achieved high success in all levels. We’ve done this because we’re very driven. However it is the same ego in us that drives us to be successful individually, which at the same time holds us back collectively. We need to overcome that and get rid of the petty differences that we have and work for the common good. Because our communities around the world are changing. Eighty to 90 per cent of marriages in the US are interfaith marriages; we need to not look at that as a negative but to embrace it and expand our culture through philhellenes, the concept has always been there.

When you think of ‘hellenism’, what is the first thing that comes to mind?
Hellenism is an idea; it’s not a religion, it’s a culture but it’s much more than that, it is a way of life, an idea [upon] which the western world has been developed. When I think of where I come from, I think about my parents; what struggles they had to endure, not only them, but also all the other Greeks around the world, the huge price they had to pay to promote hellenism throughout the centuries, for us to be able to be here today and have this conversation.