To Argos, Nafplio and Tolos they came

While in Greece, historian Jim Claven reflects on the Anzacs who showed bravery as volunteers from Australia and New Zealand in 1941 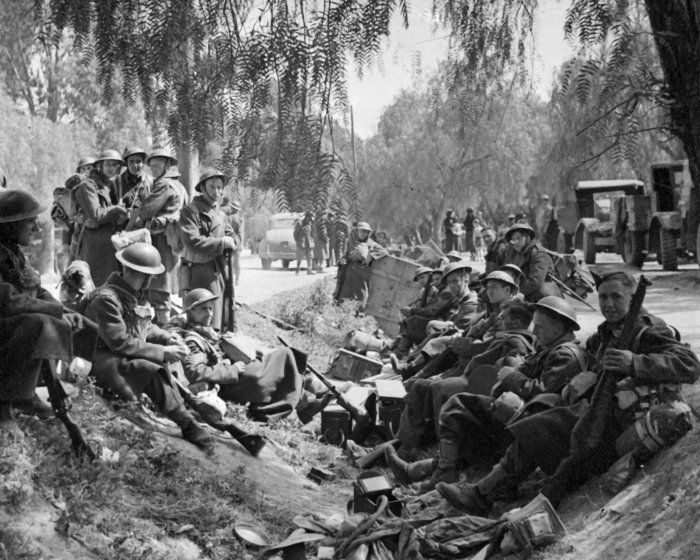 New Zealand troops resting in Nafplio, Greece as they await evacuation in April, 1941.

Walking through Argos last year – the mighty Argos of Homer’s Agamemnon – I came across its little cemetery, with its trees providing shade from the early summer sun. Holding my copy of a photograph from Australia’s War Memorial, I am taken back to 24 April, 1941 when a convoy of 160 Australian and other Allied nurses stopped here in the midday sun.

The photo shows young Aussie nurses resting amongst the gravestones and trees. They are smiling and happy, showing no hint of fear, despite the incessant air raids they faced on the road. Standing in this quiet peaceful cemetery, I reflected on how it protected these young nurses from Australia all those years ago.

Another who travelled this way in 1941 was a tired medical officer from Wangaratta, Major Edward ‘Weary’ Dunlop. Tired and exhausted, he pulled over and rested in the early hours of 26 April under an olive grove.

The road south is safe now but in 1941 nothing could have been further from the truth. As night fell on 26 April some of the troops moving south were harassed by German paratroops sent in pursuit of the Allied convoys after the battle of the Corinth Canal. And there was the constant danger of daylight air raids, craters and destroyed or abandoned vehicles littering the roads. A truck carrying the nurses overturned, injuring all aboard. Drivers would get lost in the night, taking the wrong turn and having to double back as happened to Weary Dunlop. Others would be deliberately misdirected by German agents in Allied uniforms, infiltrated behind enemy lines to gather information and cause confusion, as happened to former Melbourne Herald journalist Sergeant Henry. Over the next few days, over 11,000 Allied soldiers would be evacuated from Nafplio and the beach at nearby Tolos.

Nafplio today is one of the quiet gems of Greece. As you arrive into the town, admire its parks and statues, the lovely harbour with the Island of Bourzi, all under the shadow of the imposing Venetian castle on the Palamidi that towers over the town below. The statues in the town celebrate its connection with some of the most famous heroes of Greece’s war of independence – Prime Minister Kapodistrias, General Kolokotronis and Prince Ypislante. And it was here too that the tragedies of Kapodistrias’ assassination and the imprisonment of Kolokotronis took place.

Making your way through its lovely lanes you arrive at the town’s main square. Enjoying a Greek coffee here could not be more peaceful. But 76 years ago nothing could have been further from the truth. By April 24 the town was flooded with Allied troops, many without their officers or units, and abandoned vehicles clogging the streets.

It would be a few Australian officers led by a 36-year-old former law clerk from Richmond that would restore order to the chaos. Within hours of their arrival, Major Bernard O’Loughlin and his men had moved the troops outside the town to holding areas within citrus groves or to caves at the base of the Palamidi. Australian soldiers of the 2/2nd Field Workshop Company removed the vehicles. And how appropriate that these weary soldiers waited now beneath the Palamidi – named after the mythic Palamedes, son of the founder of the city, whose prowess before the walls of Troy earned him the praise of Ajax and Achilles and who invented the game of dice as a pastime for soldiers at rest. I wondered if any of the Allied soldiers now played dice as they waited in the shade at Nafplio.

Some soldiers were offered accommodation, food and water by the local residents, leading one to write that he had “never seen any hospitality compare with what the women and children of Nauplia gave us …. Without hesitation they gave us all they had.”

The soldiers waiting at Nafplio (and nearby Tolos) did so under constant daily air attacks, the German planes bombing the town and machine gunning its streets and harbour. Every hour bombers came in ones and twos, sometimes in sixes, and fighters coming in low to machine-gun. Many local residents hid in the cave church at the base of the Palamidi. The attacks were so constant and the fear of the soldiers was such that one mistook a flock of distant crows for Messerschmitts!

One who was not deterred by the attacks was Weary Dunlop. While others hid in an olive grove, Dunlop insisted on continuing to write a note to his fiancé back in Australia while sitting on a dangerously exposed sea-wall, as German bombs and bullets exploded around the harbour. Others were not so lucky. As the Australian nurses arrived to embark from the harbour, they saw nearby the bodies of dead soldiers killed in an earlier air raid and burning ships in the harbour.

As the evacuation ships arrived out in the bay after dark, groups of troops would receive their orders to move down towards the jetty, silently marching in groups of 50 “through the narrow, desolate streets … littered with ruins and broken glass and the inhabitants gone.”

Troops would board smaller vessels, often Greek fishing caiques or barges and move out to embark on the warships and transports in the Bay. This process could be a smelly and dangerous task. The caique transporting the Australian nurses from the jetty was full of the day’s catch and boarding the large ships in a sea swell – and in a mid-length skirt – led one British nurse to fall into the bay, only to be saved by the brave action of the HMAS Voyager’s young Able Seaman Cyril James ‘Spider’ Webb from Broken Hill.

Once aboard many evacuees mentioned the warm welcome they received from the sailors – a smile, a sandwich, biscuit, and a hot drink and place to rest after weeks of fighting and retreat. One exhausted officer fell into a sleep “like a coma” and Weary Dunlop fell asleep with a welcome tankard of beer on his chest. Some – like the Australian nurses who had hidden in the cemetery at Argos – would hear familiar Aussie accents as they boarded the Australian destroyer HMAS Voyager in Nafplio Bay. Other Allied troops would board the HMAS Stuart, whose sailors had served in the first Allied battle of the Greek campaign at Cape Matapan on 28-29 March, 1941.

By 3.00 am on April 25, over 6,500 soldiers and nurses had been evacuated to Crete and Alexandria, and a further 2,600 on the night of the 26-27. By the morning of April 29 German troops entered Nafplio and around 700 Allied soldiers were captured.

A similar evacuation organisation took place at the nearby seaside village of Tolos. Standing on the beach today, looking out to the small islets in the bay, it is a peaceful scene. But on the night of April 26-27 some 3,300 troops crowded around the village and in the hills that sheltered the bay. In the early hours of the 27th some 2,000 of these troops were evacuated, some on the HMAS Stuart and HMAS Perth – two Australian warships that had fought in the first Allied engagement of the Greek campaign, the battle of Cape Matapan on 28-29 March, 1941.

Hoping for a further evacuation the next night, 130 Australian soldiers led by Major J Miller and Captain Douglas Jackson from Brisbane established a defensive perimeter around Tolos and fought off the advancing German paratroops from Corinth – ‘The Argonauts’ as they vainly called themselves – until late in the afternoon of April 29. But there would be no more evacuations from Tolos and surrender came at 5.00 pm that day.

Those who were evacuated from Nafplio and Tolos included some of those who had fought to defend the Corinth canal on April 26. Men of the Australian 2/6th Battalion like Ballarat’s 25-year-old Captain John Jones, Coleraine’s 32-year-old Lieutenant Wilfred Sherlock and Caulfield’s 24-year-old Lieutenant John Daish. All would write detailed accounts of the tactics of the German airborne attack, hoping that the Allies would learn from the terrible experience of the men at Corinth. And the two British officers who had detonated the canal bridge – Captain Phillips and Lieutenant Tyson – sailed from Nafplio and would be awarded the Military Cross for their action that day.

(R) Nafplio and its harbour from the Palamidi in 2012.

Looking down on peaceful Nafplio and its bay from high up on the Palamidi today, I wondered at the thousands of Allied soldiers who had made their escape from captivity from this little harbour and the beaches of Tolos nearby. The Anzacs had come as volunteers from across Australia and New Zealand. Two thousand soldiers had been captured but over 11,000 had been saved. Though hundreds were now on the run in the hills of the Argolis – like Richmond’s Bernard O’Loughlin, Major Miller and Captain Jackson. But that is another story.

* Jim Claven is a freelance writer and trained historian holding both Bachelor and Masters Degrees from Melbourne’s Monash University. He has researched the Anzac trail in Greece across both World Wars, and especially the Hellenic connection to Anzac through the role of Lemnos in the Gallipoli campaign. He has been Secretary of the Lemnos Gallipoli Commemorative Committee since its creation and is a member of the Battle of Crete and the Greek Campaign Commemorative Council. Jim thanks Jenny Krasopoulaki and the Pankorinthian Association of Melbourne and Victoria for encouraging his research. This is part 2 of 4 of his articles on the Anzacs at Corinth and the Argolis. He can be contacted at jimclaven@yahoo.com.au 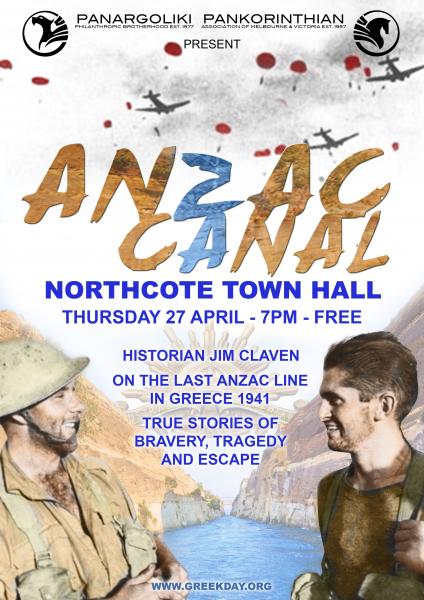