Minoan, Roman, Byzantine and beyond; Crete’s most popular city is a product of its occupiers. Michael Sweet explores the alleyways of La Canea to reveal its Venetian legacies

With its picturesque Venetian harbour and the alleyways that surround it, a visit to Chania’s Old Town, to meander through its souk-like interior, is one of the highlights of any visit to Crete.

One of the oldest continuously inhabited cities in the world, Chania was invaded over millennia by Minoans, Romans, Byzantines, Venetians, Turks, and the Germans in WWII; and all have left their mark.

These days, at the height of summer, the invaders aren’t bent on occupation; rather the annual pilgrimage from northern Europe and beyond. More than a million international visitors will arrive at Daskalogiannis airport in 2017, another 150,000 will pour off the cruise ships docked in Souda Bay to be whisked into the city, pick up a souvenir or two, and while away a few hours at Chania’s waterside cafes and restaurants.

But the more discerning will seek a deeper experience of this ancient town. The richness of Chania only comes to the surface when you become an archaeologist of sorts, and dig beyond its obvious contemporary attractions, to reveal its deep history.

The dynasties who etched their existence on this outpost of western Crete left an indelible mark, not just in the built environment, but upon the culture of Crete and Greece itself. And of all those who ruled Chania, it was the Venetians whose legacy remains the most intact in the physical city we see today.
They called it La Canea in the early 13th century when they arrived, an outpost of the Serenissima Republica Vèneta (Most Serene Republic of Venice).
It was the Venetians who constructed the Old Town’s massive fortifications, most of which remain today. During their rule – between 1215 and 1645 – despite waves of settlement over more than 400 years, remarkably, the Venetians never amounted to more than about 10,000 individuals, concentrated in the main towns of Chania, Rethymno, and Heraklion. They were a minority in a mostly Orthodox Cretan population, that by 1500 AD, had reached some 200,000. As all Crete’s occupiers have found, it was not an easy relationship.

During the first two centuries of Venetian rule, fierce revolts by the Orthodox population against the Catholic Venetians were frequent. Fourteen revolts took place between 1207 and the last major uprising, the Revolt of St Titus in the 1360s, which united Greeks and the local Venetian serfs against Venice’s direct control.

Despite this resistance, Chania and Crete prospered under the Venetians, economically and culturally; and their cultural impact – how Venetian society redefined Hellenistic expression – not least through the influence of the Italian Renaissance – is perhaps its most vital legacy.

The artistic and literary revival that was the Renaissance was unparalleled in the Greek world, and in Crete, saw the creation of the Cretan School of iconic painting, which reached its pinnacle in the work of El Greco.

Even more significantly, the uniting of Italian and Byzantine forms meant a distinctive literature using the local idiom emerged, culminating with the early 17th century romantic poem Erotokritos and the tragedy Erophili – the most important Cretan Renaissance literature ever produced.

Walk like a Venetian
To follow in the footsteps of the Venetians in Chania who built the Old Town’s massive fortifications still seen today, Toponas is perhaps the most evocative quarter to begin a journey. Directly west and south of the port – hemmed in between the massive west wall, the seafront and the Old Town’s main street Chalidon – Toponas is a maze of alleyways, each with a story to tell. Theotokopoulou, the main street which runs north to south, is the perfect start to a journey of Venetian exploration. At its northern end lies the Venetian church of San Salvatore and one of the main ancient gates of the city.

Heading south, Angelo Street on the left, with its examples of early 17th century residential architecture, leads directly to the harbour and Firkas Fortress.
Construction of the fortress began in 1610 and was completed only a few years before the fall of the city to the Turks in 1645. The site has added significance: on 1 December 1913, the Greek flag was raised here for the first time in the ceremony that marked Crete’s unification with Greece. Head east along the waterfront, past the domed Yali Tzami mosque which dominates the approach to the port’s eastern basin, keep walking, and you’ll pass the Megalo Arsenali. Constructed by the Venetians in the 16th century to construct and repair their galleys, today the building houses the Center of Mediterranean Architecture. Beyond are seven more arsenali that give a further insight to the harbour’s operations during Venetian rule.

To complete your walk head out along the breakwater mole to Chania’s iconic lighthouse. Built by the Venetians around 1600, its minaret-style derives from its rebuilding by Crete’s Egyptian rulers in the 1830s.

Luxurious history
There are scores of hotel options to choose from in the Old Town, but for the more discerning guest who wishes to immerse themselves in the walled city, Serenissima Boutique Hotel delivers a sophisticated five-star experience that is hard to match.

Housed in a former Venetian mansion dating from 1550, the building was bequeathed to its present owner Stamatis Gkirtis by his grandfather. Mr Gkirtis began a loving renovation of the property in the early 2000s and opened its doors as a hotel in 2014.

As a member of the Yades Greek Historic Hotels Group which celebrates Greece’s cultural heritage by uniting hotels of exceptional historical significance, like the 18 other properties in the Yades Collection, Serenissima’s ethos is all about providing guests not only luxurious comfort and the highest standards of customer service, but also a precious insight into the history and culture of Chania and its environs.

Hidden away on Skoufon Street Serenissima is a refuge of calm, comprising seven beautifully appointed rooms (including three breathtaking superior suites with generous balconies) designed in a warm minimalist style. Coco-mat king mattresses and Molton Brown bath goodies give a hint at the attention to detail that is the mark of this refined establishment.

Complementing the delicious accommodation, the hotel’s fine dining restaurant, under the stewardship of chef Iosif Petrof, offers a menu that combines the finesse of French cuisine with the freshest Cretan ingredients. Good taste? Serenissima has it in spades. If you’re after serenity, luxury and relaxation, this is a place to savour. 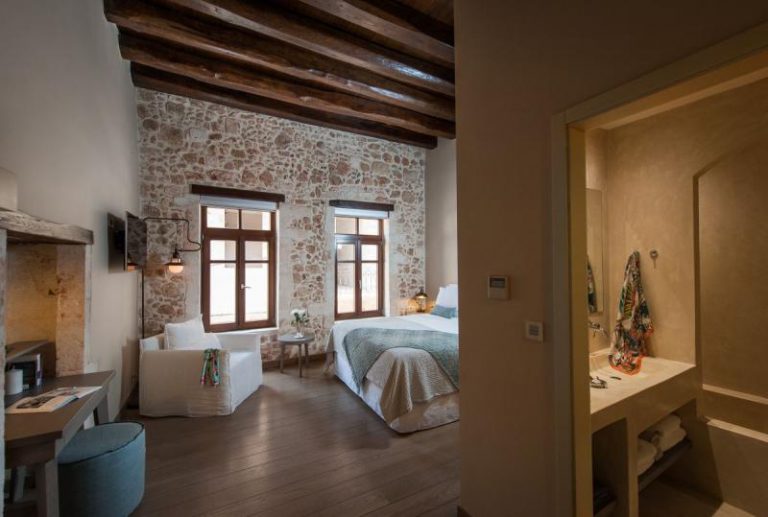 Must-see sites
Where to start. A stroll through the Old Town will take you beside the remains of Minoan palaces, Venetian arsenals, Ottoman timber houses, elegant mansions, and tiny Orthodox churches. Sites that should be on any visitor’s list include: the Maritime Museum of Crete with its rich collection illustrating the history of seafaring in Crete and its unique Battle of Crete exhibits; the Archaeological Museum of Chania, housed in the beautifully restored 16th century monastery of Saint Francis on Chalidon Street; the Byzantine and Post Byzantine Collection at the church of San Salvatore; and the Historical Museum and Archives in Heraklion (Sfakianaki 20) that traces Crete’s war-torn history focusing on the struggle against the Turks. The restored Etz Hayyim Synagogue on Kondylaki includes a moving memorial to Chania’s Jewish community that perished in WWII.

Splantzia quarter
To escape the crowds head to this tangle of narrow streets which was the Turkish neighbourhood in Ottoman times. Now a fashionable neighbourhood, in Splantzia’s 1812 Square the church of Agios Nicholas was once the city’s central mosque. Today it is the only temple in Greece that has both a belfry and a minaret.

Municipal Market
Built in 1913 the agora is a vibrant slice of modern Chania. Constructed as Chania’s main vegetable, fish, and meat market, today it operates in much the same way, supplying Chaniots with the staples of the traditional Cretan diet. 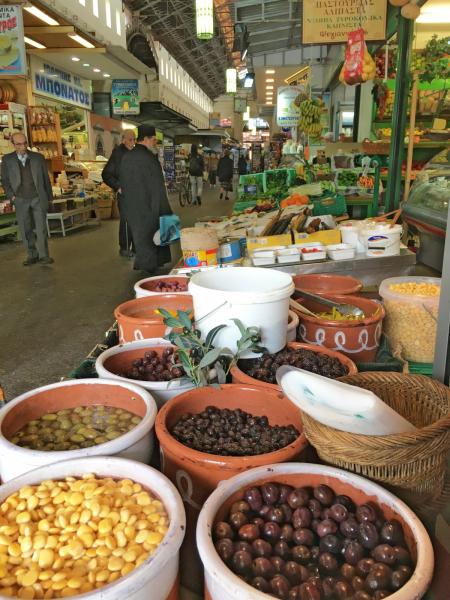 Restaurant pick – Chrisostomos
This award-winning taverna hides its treasures just behind the harbour at its eastern end. A favourite is lamb tsigariasto – a traditional dish from the south of Crete. Other delights include goat with mizithra, sfakiani pita, steamed stamnagathi, with olive oil and lemon. Fresh, healthy and delicious. 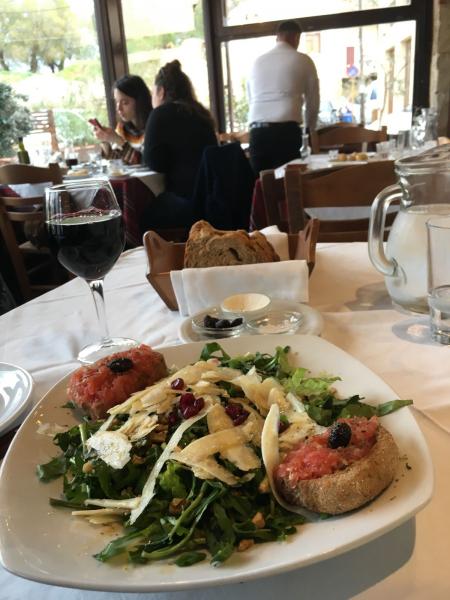 Getting there
Aegean Airlines operates four services daily from Athens to Chania. Ryanair also flies to Chania from Athens.

The author of this article is indebted to Heraklion-based historians Michele Buonsanti and Alberta Galla for use of their research provided in their book ‘Candia Veneziana – Venetian Itineraries through Crete’ published by Mystis.

* Michael Sweet was a guest of Serenissima Boutique Hotel and travelled from Athens to Chania with the assistance of Aegean Airlines.