Syrian who sought refuge in Greece sets up charity 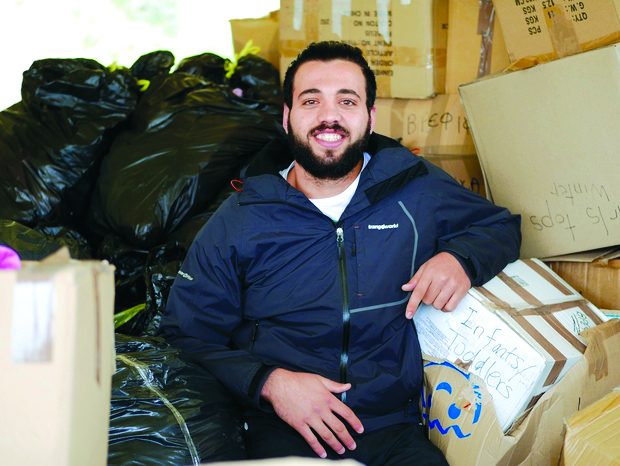 Omar Alshakal, a Syrian refugee who attempted to swim to Greece to make a new life in Europe, is now dedicating his time to helping other refugees on the front line on Lesvos by starting a charity.

Refugee 4 Refugees looks to encourage fellow refugees to collect clothes and toys for Syrians in Greece and in Middle East refugee camps, to run kitchen projects on the island, and to fundraise for a rough-terrain vehicle to assist boat landings on Lesvos.

“Some NGOs, you don’t know how the money gets used, you disagree with how they do things. I wanted us to be able to help ourselves,” the 23-year-old told The Independent.

Since putting the word out, an increasing number of refugees have started to lend their services, and it is a chance for them to play a more active role in the crisis rather than be victims, Alshakal says.

“Now he has set up Refugee 4 Refugees to help [give refugees] work that gives a meaning to life now that they are stuck in camps on the island … It makes a simple but real difference to refugees’ everyday lives.”

Born in DeirEzzour, which is now under siege by Isis, when the civil war broke out Alshakal was arrested for his activism against President Bashar al-Assad’s regime. After his release, an air strike saw him wheelchair-bound with a shrapnel wound to his right leg while volunteering as an ambulance driver.
It was this incident that led him to Turkey seeking medical treatment. But when he didn’t find what he needed, the only option seemed to be swimming while injured from Bodrum to Kalymnos.

He was picked up by authorities before reaching the shore, and over the next 18 months experienced one hardship after another including the accusation of being a member of Isis resulting in the temporary suspension of his asylum application in Germany.

Disillusioned, in early 2016 he set his sights on returning to Syria, but when he arrived in Greece he found himself on a new path with the realisation he could help others in his position.

“I spoke their language, I knew their pain, I knew what they were trying to find,” Alshakal said. “I had been volunteering in Germany. I had to help here too.”

While his focus is on the work of his charity, with his Greek visa expiring in 2018 he is not sure what the future holds.

“I will keep doing what I’m doing here until someone stops me,” he said.

“But really, still, I just want to be able to go home. That is what all of us want and what I think many people in Europe still don’t understand.”