“It was Christos who facilitated my joining the Australian Labor Party in 1982,” Maria Vamvakinou MP told Neos Kosmos. 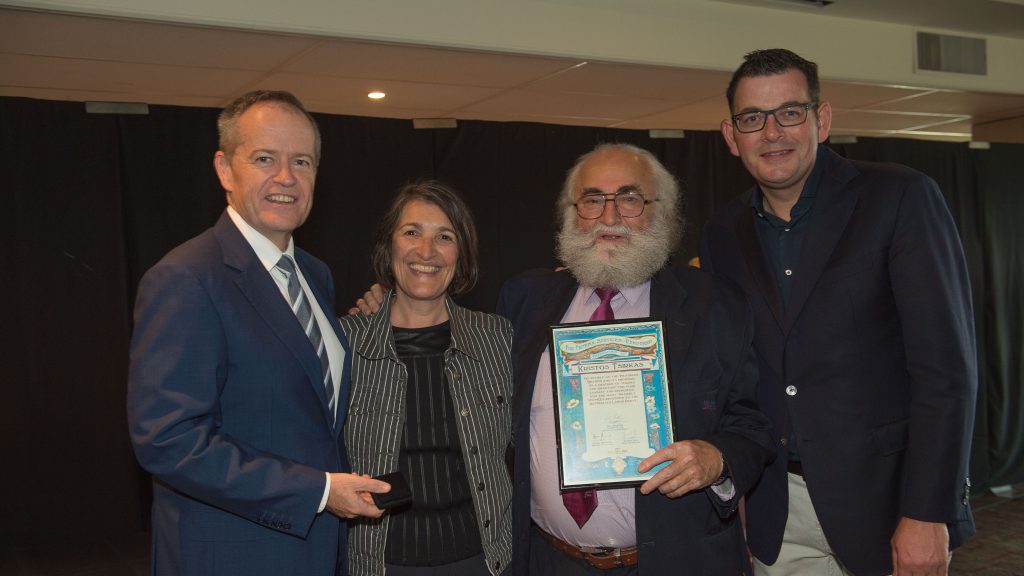 Christos Tsirkas, 74, former president of the the once numerous Greek-speaking Australian Labor Party branches in Victoria, received his lifelong membership of the ALP at the state conference last weekend.

Mr Tsirkas, who has been an ALP member since 1972, had worked as a booking clerk at Flinders Street Station for nearly 40 years.

He was also one of the most active members of the Rail Tram and Bus Industry Union, promoting Labor’s core values.

“I have known Christos Tsirkas for almost 40 years. It was Christos who facilitated my joining the Australian Labor Party in 1982,” Maria Vamvakinou MP told Neos Kosmos.

“One of the first people to mentor me during that period was Christos Tsirkas. He has mentored, and continues to encourage, young, progressive Greek Australians.”

Ms Vamvakinou reflected on the beginnings of her involvement in the Greek community through her association with committee members of the Greek Orthodox Community of Melbourne and Victoria in the early 80s, and with the ALP round the time of the dismissal of Gough Whitlam in 1975. Ms Vamvakinou continued, saying that Mr Tsirkas was one of the most prominent figures of political and community activism throughout some of the most significant and momentous periods in the union movement, the labour movement, is active in the Greek community, and has served on the board of the Greek Community of Melbourne and Victoria.

“He has fought for the rights of migrants and he has worked hard on behalf of the Greek community,” Ms Vamvakinou stressed. “As a union man, he has fought many battles to ensure and protect the rights of workers; fighting for their wages and conditions.”

“More importantly, he fought for and supported me in becoming the Federal Member for Calwell,” she said, adding that she owes her political career to him.

“He remains a friend and supporter, and to all of us in the Greek community he is known for his continued support and mentoring of generations of young Greek Australians. Christos Tsirkas is an icon, and I was very proud to stand with him when he received his lifelong membership of the ALP. He has dedicated his life to the service of the community and to the labour movement, he has done it with passion, with conviction and with his own and unique style: a legend.”