‘Greeks are enormously rich in character; they’re not these silly little ethnics’

As Gregory Andreas’ play Wogs In Love returns to the stage, he reflects on his attempts to break stereotypes and challenge the audience’s notion of Greek characters 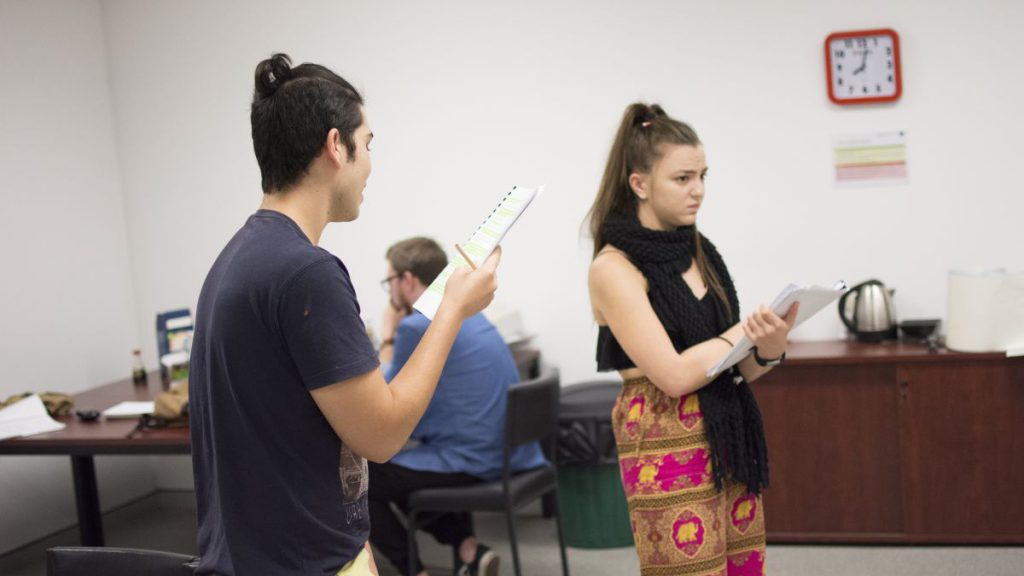 Carl Figueiredo and Melanie Bolovan in rehearsal for Wogs In Love.

Girl meets boy, girl and boy fall in love, boy is from different cultural background, girl’s father won’t accept their union on this basis, so boy sets out trying to win over father.

It’s a story that’s all too common across the world, and in particular in multicultural Australia, and is set to be reproduced on the stage in July at Queensland’s Judith Wright Centre of Contemporary Arts in Greg Andreas’ play Wogs In Love.

While the title may bring to mind kitsch stage shows of a similar name, it’s not to be confused.

The story follows Anna, 24, and David a 27-year-old soon to graduate from La Trobe University. In love, they look forward to spending their future together, but are faced with opposition from Anna’s Greek father Niko. A hard-working immigrant, despite the opportunities presented to him in Australia he refuses to have himself or his children integrate into Australian culture; as he always saw Australia as a stepping-stone to return to Greece. The play follows David’s road to winning Niko over – if possible that is.

The play was the first to be written by Andreas in 1982, and was born out of a skit he did with the Jika Jika Players before doing a run at La Mama Theatre, formerly the Carlton Courthouse.

When asked what inspired the story, he responds with a laugh.

“I did have relatives,” Andreas tells Neos Kosmos.

“This was [set] when the intermingling of Greeks and Australians was still a foreboding thing. Now no big deal. But back then it was still one of those issues. And I did have relatives who were in those positions, so it wasn’t difficult for me to draw on the community.”

Looking back on his catalogue of work – the playwright has gone on to write a number of scripts including Johnny, A Fine Australian Soldier (which was accepted into the Australian National Playwrights Conference) Milk and Honey, Happy, and SBS film The Chase – he admits “It’s probably what I would say is my most naive work, but it still is a play [at which] people really laugh too.”

By naive he means the style in which it was written, simultaneously using a number of styles including broken English, which he says is something he never did again.

“I had a theory that Greeks were as eloquent and as clear as those people speaking English. So after this play I made a decision [that] none of my Greek characters would speak with accents,” Andreas explains.

But what’s most fascinating about his take on a story of forbidden love is that the ethnic, the ‘other’, is actually the Australian character as opposed to the migrants.

“In this sense the Greek father thinks he comes from a superior culture – the Greek culture – and the only person here who is marginalised is the Australian boy. So it’s one of those fascinating plays that makes Australians very uncomfortable, and that really is one of its huge pluses I think,” he says.

Now 35 years on, Wogs In Love is still getting laughs and a round of applause, which Andreas admits is a “fantastic feeling”.

But when Four Stage Productions approached him, and he came face to face with his first work, he says he made a concerted effort to stay true to the writer he was in 1982, but admits he couldn’t help but tweak it for his 2017 audience.

“I still wanted it to be a reflection of who I was back then; I wasn’t as strong a writer but I was still as passionate … I’ve introduced one new character and I thought that was exactly what the play needed. His name is George, a Greek boy who the father is trying to line up with the daughter, and he’s quite an interesting character too, he adds a lot of flavour to the play,” Andreas says.

What Andreas is really excited about this time around is the chance to move away from the stereotype of what a Greek play is.

While he admits to having played on stereotypes himself in the original with the use of broken English, this time around while the language hasn’t changed, Niko doesn’t speak in an accent but rather says things like this: ‘Let me explain this to you in Greek,’ and then speaks eloquently in fluent English.

To break down the barriers even further, the father is being played by Indigenous Australian actor Colin Smith, while Anna is being played by Melanie Bolovan, an actor of Romanian descent with red hair, which the playwright sees as a major breakthrough.

“I still think that the Greek culture is missing the boat if they keep doing this silly nonsense, you know what I mean? This kitschy stuff. Yeah, sure that’s funny, don’t get me wrong. But there’s a whole wealth behind Greeks.”

‘Wogs In Love’ will be staged from 6 – 14 July at the Judith Wright Centre of Contemporary Arts (420 Brunswick St, Fortitude Valley, QLD). To view times and purchase tickets, visit wogsinlove.com