Michael O’ Brien’s tweet re Jenny Mikakos was particularly cruel, because it mocks the entire Scylla and Charybdis paradigm faced by migrants in Australia 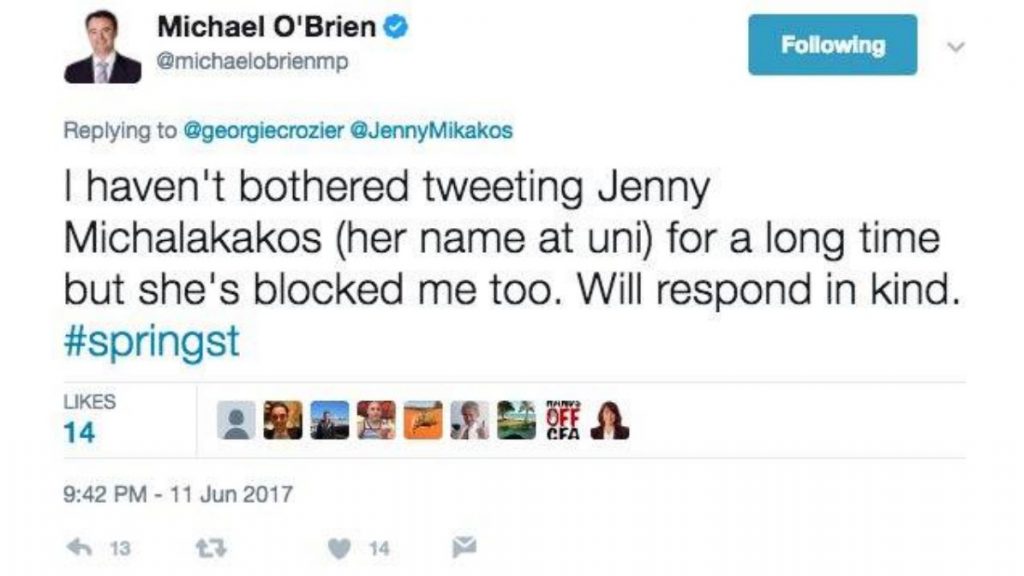 “But the meanest thing that he ever did
Was before he left, he went and named me “Sue”.
Well, he must o’ thought that is quite a joke
And it got a lot of laughs from a’ lots of folk,
It seems I had to fight my whole life through. ” Johnny Cash “A Boy named Sue.”
Not a day goes by where I don’t have a telephone conversation that goes something along these lines:

Six times out of ten, the person I wish to speak to is unavailable and the whole conversation has been for naught, save to irritate me. The irony of it, of course, is that my father changed our surname in English from Kalimnios, or Kalymnios to Kalimniou, on the bizarre grounds that he felt Kalimniou to be more euphonious and infinitely more pronounceable to the Anglo ear than our original name. Apart from spawning more versions of our name in Greek and in English than I have personalities, the abovementioned reform has not contributed in any meaningful way in rendering my new surname any more accessible or articulation-efficient than our previous one.

I have my mother to thank for my first name Dean. She felt that Konstantinos was too long and that Con had unpleasant connotations, should I ever in the future, enter the class of those who call themselves “professionals.” Sadly, as can be seen above, this Old English name, signifying a valley, is also liable to distortion. This possibly may have to do with the fact that unbeknownst to us, the name Dean is also considered by some to have a Greek derivation: originating from the Greek word «δεκανός» which signifies a monk or dignitary in charge of ten others. Most days, I am barely in control of myself, let along others, which is why I believe that I have borne this name all my life, with great ill-will.

In Supreme Court of Appeal Justice Emilios Kyrou’s autobiography “Call me Emilios,” His Honour outlines the profound psychological reasons that compelled migrants to change their names, including to avoid racism, and as an aid to assimilation. In a recent conversation I had with one particularly sensitive Judge over the bench, he asked me whether migrants felt compelled to change their names in order to “fit in and be accepted” as he put it. “That, and for ease of pronunciation,” I responded, gratified at his nuanced understanding, for I had spent the better part of the morning listening to senior barristers sniggering at what they considered to be the unpronounceability of the majority of the names of the persons involved in the court case we were running, and when they thought I wasn’t listening, my own.

Conversely, in his autobiography, His Honour Justice Kyrou also goes on to show how reclaiming one’s original name can be a profound statement of personal identity. This is the reason why Greek name changers are widely considered with opprobrium by members of our community. Regardless as to how broad one’s knowledge of the Greek language is, or how deep their connection with Greek culture, much of one’s identity seems to hinge upon one’s name and one’s preparedness to bear it, regardless of size.

And let us face it, in the realm of ethnopolitics, size does matter. In our day and age, name-changers are considered identity denialists and sell-outs, weak individuals who give in to the perceived overwhelming pressure of the dominant culture to assimilate. At the same time that we emulate our Anglo compatriots by stumbling over seemingly unpronounceable Sri Lankan surnames such as Wickramaratne with levity, we also seek to exclude Greeks we possibly do not like, such as Terence Quick or Miltiadis Evert from our own group, on the basis that their names do not conform to our own self-imposed ethnic stereotypes. It should be noted that up until recently, foreign names in the Greek language were generally hellenised in order to make them more intelligible to Greeks and it is only now that foreign names are left intact, though generally rendered in the Latin alphabet, regardless of what the original alphabet the person’s name was written in. We will brook no Cyrillic or Arabic in our patch of the European Union…and the phenomenon of Helladic Geeks retaining the Anglicised versions of the surnames of Greeks Abroad within Greek in order to accentuate their foreignness, (Μαρία Μενούνος instead of Μαρία Μενούνου for example) also should be noted as a reverse phenomenon.

This is what makes Victorian Opposition MP Michael O’ Brien’s recent inexplicable tweet about Victorian Government Minister Jenny Mikakos’ surname even more hurtful. Tweeted he, on his account on 11 June 2017: “I haven’t bothered tweeting Jenny Michalakakos (her name at uni) for a long time but she’s blocked me too. Will respond in kind.” Here O’ Brien appears to be bizarrely emulating the type of reverse nationalism that is usually the preserve of minority ethnopurists, rather than adopting the usual deprecating approach to long names that characterizes increasingly smaller sections of the Anglosphere. The implication of his squawk seems clear: A person who changes their name, thus denying their heritage, is a person who is untrustworthy, for they are concealing their identity, or at odds with themselves and thus not best placed to serve the interests of others.

Michael O’ Brien’s tweet is particularly cruel, because it mocks the entire Scylla and Charybdis paradigm faced by migrants in Australia, especially post war, compelled to choose between maintaining their original identity and assimilating and in the process, not entirely achieving either. It mocks the harrowing experiences of His Honour Justice Kyrou, who felt compelled to change his name in the face of extreme and violent incidences of racism and only felt comfortable enough to assert his original identity in adulthood, having made remarkable achievements within broader Victorian society. It derides the feelings of embarrassment and frustration caused in migrants and those of ethnic backgrounds when those of the dominant culture mispronounce or make fun or their names, and further pour scorn upon their feelings of guilt and sense that they are betraying their culture when they change their names in order to avoid such incidences.

In short, this hateful remark has the effect of trivialising and obfuscating a phenomenon of racism whose wounds are still deeply felt down the generations, even when such racism has largely abated in our multicultural society. The roots of the ludicrous change of my family’s surname, for example, lie in the experience of my six year old father seeing his father and entire family ordered off the tram in the late fifties, for having the temerity to speak Greek within it. Thus, when O’ Brien derides Jenny Mikakos for changing her name, he orders me off that tram, again and again and again.

Of course it would be interesting to examine with what credentials O’Brien seeks to abrogate to himself the right to define, compartmentalise and regulate the manner in which members of ethnic minorities in this State, including elected Members of Parliament, define their personal identities, and indeed, dictate the way that this process should evolve over time. Is this Opposition MP’s vision for Victoria one where its citizens inhabit clear, officially drawn categories and stereotypes that are immutable in order to afford easy identification and prevent cultural, racial or other miscegenation? Viewed from this perspective, the implications of O’Brien’s remarks on the multicultural fabric of Victoria are deeply disquieting, indicating why such remarks should not be tolerated.

When I review how many times I try to spell my surname for people daily, or enumerate the number of times modern Greeks misspell my surname as Καλύμνιος instead of Καλυμνιός, or attempt to render Dean Kalimniou in excrescent antipodean as Ντιν Καλυμνίου, I marvel at how each of those misspellings provides a gloss upon my own multifaceted, multicultural existence. I am all of these and more besides. Like Jenny Mikakos and the rest of the members of the Greek community of Melbourne, I both transcend and defy definition. And this, is something that the blinkered and the twittered, will never comprehend, as much as Johnny Cash may sympathise.