Greek Australian footballers Betti Michael, Sophie Papatsanis, Kiara Hronopoulos and Paige Zois have been playing together at an elite level for the past three years 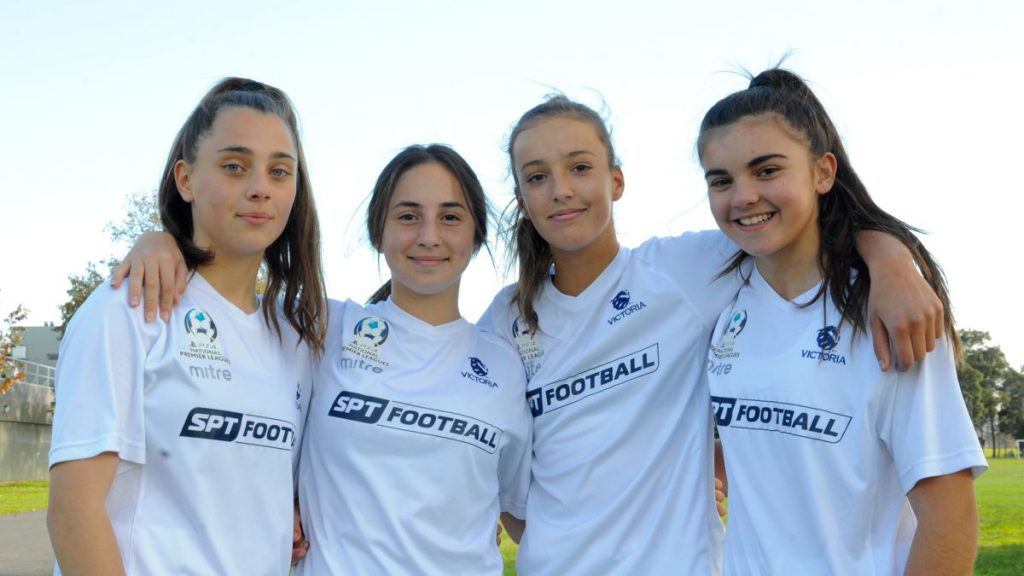 Four Victorian teens who have already taken major steps along those pathways are Greek Australian footballers Betti Michael, Sophie Papatsanis, Kiara Hronopoulos, and Paige Zois. The talented quartet has been playing together at an elite level for the past three years as part of the state’s elite junior development squad, the Junior NTC squad.

They may be 13-year-olds, but the four promising Victorian footballers already share a distinguished record of team successes by winning a string of national junior titles as teammates in state representative sides.

As part of the Victorian Junior U15 NTC team, they are about to embark on their second successive FFA National Youth Championships at Coffs Harbour in the second week of July. It follows their success in the 2016 national championship when they won the U13 National title, in a historical first ever win by a team from Victoria.

Before that success, the girls had also won national titles playing together in state representive sides in national schools competitions in 2014 and 2015.
The upcoming National Youth Championship gives the players the chance to test themselves against the best players from all over the country in front of national team coaches. For attacking midfielder Paige Zois, “Having won the championship playing in the U13s last year I’d love to repeat it this year in the U15s whilst showcasing my skills in front of the national selectors.”

Left winger Kiara Hronopoulos says she is also looking forward to going “back to back at the national championships in Coffs Harbour.”

When they’re not busy winning national titles the talented quartet train weekly and compete against older players as part of the NTC junior team in the NPL W Victoria U18 league competition. Often training three or four times a week, the team is currently third on the ladder with Zois and Michael joint second top scorers in the league with 10 goals apiece.

Despite their youth, the girls are no novices, having played the sport for many years. In Hronopoulos’s case, her first introduction was in her preschool years as a three-year-old kicking a football around the back yard with her brother George. She went on to play junior football at Oakleigh Cannons and South Melbourne before being selected to join the NTC elite development squad.

Defender Sophie Papatsanis began her junior football at Manningham and credits her dad for getting her involved in the game while striker Betti Michael was inspired to take up the game by going to matches and watching her older brother Peter play.

For Paige her interest in the game was first awakened at primary school.

“All the boys at primary school played soccer at recess and lunchtime and I thought I’d join in too as it looked like fun. I soon worked out that I loved playing, I was good at it and the boys didn’t treat me any different, it was just expected that I was a part of the soccer game fun,” she remembers.

As well as being exceptionally talented, the girls enjoy the friendships and the fun shared playing with others in a team. They also share a passion for playing sport competitively and a drive to win. Paige says, “I love the skillful and competitive nature of the game and playing the game I love with some of my best friends. I love sport and being active and soccer keeps me fit. I’m an avid follower of women’s soccer. I follow the W-league and I especially love watching the Matildas. My favourite player is Steph Catley who is also the only Victorian currently in the national team.”

All the girls are fans of the Matildas and would love to one day play for the green and gold. Kiara says, “I want to play at the highest level, Matildas if I can make it . . . My goal is to obtain a scholarship in the US and play in America for a professional team.”

Betti says, “Representing my country and playing for the Matildas would be a dream come true. I follow the Matildas and they are a big inspiration in my life.”

And who knows, with their talent, dedication, and passion for the sport, just as they’ve made a habit of winning national titles for their state, they may one day go on to win an international title or two for their country, at an Olympic Games or a World Cup tournament.