Athens: the shock of the new

As the Greek capital suffered the ravages of the economic crisis, over the past decade a quiet revolution took place: a redefinition of what a ’boutique hotel’ can be. Michael Sweet celebrates a renaissance in the art of Athenian accommodation

A decade ago renowned Brazilian designers Fernando and Humberto Campana were given a challenge: to reinvent the former Olympic Palace Hotel in central Athens. Their ‘canvas’ was one of the pre-eminent examples of modernism in the city, and the brief was as bold as it was poetic: to infuse the building with memory – architectural and cultural.

For some, art is a luxury. But not for me. We don’t need it to survive, but we do need it. It has something to do with the soul.

So began an extraordinary process. Architecture students from the University of Thessaly, advised by architect Yorgos Tzirtzilakis, were invited to turn the former hotel into a creative laboratory, a place to experiment, and key to the Campanas’ concept was ‘transformation’, a kind of alchemy, involving dismantling the old hotel’s constituent parts – its furniture and fixtures – and rearranging them to create an extraordinary contemporary environment.

The result was the creation of not just a luxurious, comfortable, well-designed hotel with all the top notch amenities, but an environment where art – and daring, playful artistic exploration – are central to a guest’s experience.

New Hotel has aged well since it opened its doors officially in 2011; its original vision as fresh and potent as ever. Tucked away near Syntagma Square, it remains the flagship of Yes!Hotels’ five Athenian properties, which include Periscope in Kolonaki, and Semiramis, Twenty One and the Kefalari Suites in Kifisia. Dakis Joannou
Of course, they were never going to be ordinary, the hotels envisaged by the group’s owner Dakis Joannou. Aesthete, art collector and founder of the influential DESTE Foundation for Contemporary Art, the former Greek Cypriot civil engineer has never pulled his cultural punches. One of the most powerful figures in contemporary art, Joannou’s contribution over more than half a century, as a collector and patron – in Greece and globally – is immense, and the philosophy that drives his passion for modern art propelled his move into the hospitality industry.

The hotels go far beyond bespoke accommodation with a contemporary design twist. Each are playful spaces that invite guests to explore, to smile and to question; seductive spaces in tempting our curiosity, enrich our lives. The unifying thread? Art and its purpose.

On the occasion of his 75th birthday in 2014 Joannou wrote: “For some, art is a luxury. But not for me. We don’t need it to survive, but we do need it. It has something to do with the soul. It is what man needs to make him more human.” That understanding of art and its place in our lives is what makes Yes!Hotels’ properties sublimely different.

Sitting with the group’s managing director Stefania Flenga in New Hotel’s favela-inspired New Taste restaurant, one can’t help but be impressed by how she expresses Joannou’s mission, and the passion she and her team bring to their work.

“Today’s travellers take design and amenities as standard,” says Stefania. “What they’re looking for is authenticity, originality and meaning; they’re after local inspiration and compelling experiences that will open their minds. Meeting that need is what we’re all about.”

Stefania joined Yes!Hotels in 2008, having led the relaunch of a classic icon of the Athens hotel scene – the King George. The opportunity to head up the new arty kid on the block was an offer she couldn’t refuse, she says, not least because of Joannou’s inspirational vision.

“Dakis is very hands-on. He never tires of being creative. He inspires us to go forward, and to always be impeccable”.

While central to the the Group’s brand identity, the words young, enthusiastic and seductive can equally be applied to her boss, she adds.

“It’s who we are, it’s about how we feel in our minds, it’s not about age. Those words describe Dakis so well, he’s so enthusiastic and never stops.”

Stefania reveals something that is not immediately recognisable in the rare interviews the driven Joannou has participated in over recent years: that he is a team player and a sensitive motivator. “Whenever I have an idea I can call him up. He’s always sharing his thoughts with the team but without imposing those thoughts.” 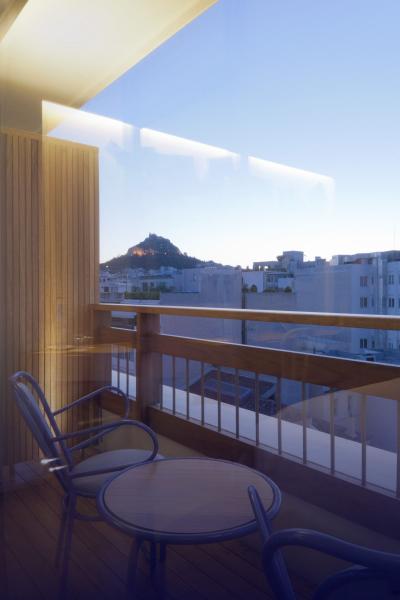 Crisis management
It certainly hasn’t been plain sailing for Stefania and her colleagues since Yes!Hotels opened its doors, with the business having matured through some of the most difficult times of the Greek economic crisis. Between 2008 and 2013, as Athens became the world’s focus for all the wrong reasons, city-centre hotels felt the downturn and Yes!Hotels was no exception.

New Hotel could hardly have had a more difficult rite of passage as it emerged on the Syntagma stage. With one of the largest market segments for Yes!Hotels being the US, room occupancy over that period dropped like a stone, and American customers, sensitive to US government travel advisories stayed away in their droves. Since 2014, with fewer scenes of Syntagma erupting in riots being relayed to the world, growth in Yes!Hotels’ key target demographic, the Fully Independent Traveller (FIT) market returned. With the Greek capital enjoying stability in 2015 and 2016, FIT numbers look set again for strong growth this year.

“There’s an opportunity for us to work with local communities more, and invite our guests to interact with those communities,” she says, “make them feel they belong. It’s about creating synergies with brands, local artists and producers.”

“In 2017 the word for us is simplicity,” says Stefania. “Too often the industry makes travel complicated, gives too many options. Independent travellers today are looking to enrich their lives with transformational experiences, and seek fulfilment by sharing them with others. That enrichment is at the heart of what we do.” Immersed in Kolonaki
2017 ushered in a makeover for Periscope, YES!Hotels’ antidote to the run-of-the-mill central Athens hotel. The addition of a new lounge of cool blues, lush fabrics and a free 24/7 refreshment bar, has transformed this urban hideaway, just a two-minute walk from Kolonaki Square.

While the hotel’s underpinning design concept is that of a subterranean observation post, inviting guests to gaze and marvel at the life and culture of the Greek capital, above all, it’s Periscope’s ‘sophisticated informality’, a tranquil ‘home from home’ in the heart of Athens’ most fashionable district, that delivers.

With the National Archaeological Museum, Benaki Museum, and the Museum of Cycladic Art on the doorstep, along with high-end shopping outlets, intimate boutiques and Kolonaki’s famed cafes all a gentle stroll away, Periscope’s guests become, albeit temporary, citizens of Athens’ most cultured neighbourhood.

If clean lines and tranquility are your thing, coupled with high quality and unobtrusive customer service, Periscope is the ideal base for anyone wishing to immerse themselves in the heart of the Greek capital.

Joannou invited American pop artist and friend Jeff Koons to design the yacht’s exterior finish. Koons (whose fame includes selling the most expensive artwork ever by a living artist at auction – US$58.4 million in 2013), based his design on warship camouflage.

* Michael Sweet was a guest of Yes!Hotels and gratefully acknowledges the assistance of the DESTE Foundation for Contemporary Art.