The widows and the dear departed 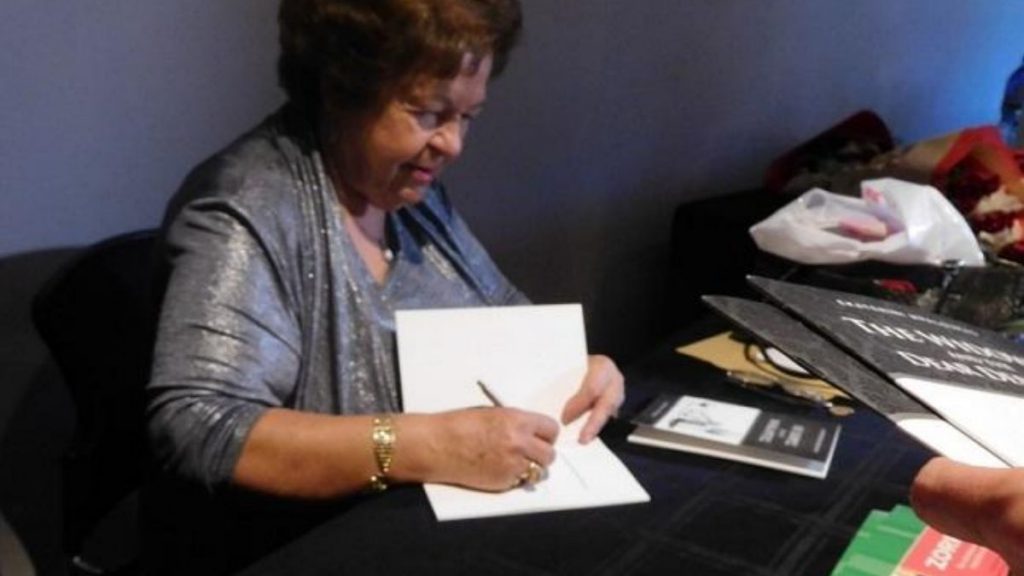 Rarely is a book offered to the community that is so deceptively simple in style, so disarmingly charming in its imagery and yet so infinitely subversive. Yet Ekaterini Balouka’s Οι Χήρες και οι Μακαρίτες translated into English by Konstandina Dounis as The Widows and the Dear Departed is truly outstanding in scope, in the references it employs, and the way in which its metanarrative teasingly gyrates upon our sense of aesthetic.

It is important to note from the outset that Konstandina Dounis’ translation, though painstakingly accurate, is no substitute for the original Greek and thus forms a counterpart to a work of duality.

The conondrum can be seen in the title: mακαρίτες, literally means the beatified ones, if Jesus’ μακαρισμοί on the Mount, are translated as the blessings . . . and truly blessed are those who are departed for the reasons Mrs Baloukas will set out throughout her clever narrative, yet to translate the title as the Widows and the Blessed would not only be too obvious but also deny it the mortal connotation inherent in the Greek. Conversely, to render the title as
The Widows and the Blessed Dead, has all the makings of a decent horror film, though I do not believe that is the author’s intention.

Similarly, Mrs Balouka has chosen to write in a light form of her native Pierian Macedonian dialect, a dialect whose distinguishable features, such as an almost indiscriminate massacre of consonants, and endearingly, the use of the feminine article where a masculine one is usually employed i.e. ‘ι καϊμένους’ instead of ‘ὁ καημένος’ cannot be rendered into Australian English in any way. The cultural and linguistic worlds are just too diverse and Australian English is too young an idiom to have developed equivalent recognisable peasant dialect forms. Konstandina Dounis’ prose overcomes this obstacle by rendering the tone, the rhythm and the cadences of the original, if not its idiomorphy. Mrs Balouka’s endeavour in rendering her native patois is praiseworthy, especially at a time when these are dying out in her homeland, thanks to an onslaught of Athenian centralised prejudice and extremely bad daytime television. Historians and sociologists of the future may well want to study the significance of why she, and a few other diasporan authors such as Haris Siamaris, whose book Τα Τραούδια του Χωρκάτη is written in the Cypriot dialect, have penned works in dialects for which not much real literature is extant.

The structure of the short book is delightfully tight and well comported. The narrator is visiting Greece (she takes pains to point out that she is with her husband, a clever juxtaposition of the scene that is to follow from her own reality) when she spies five widows making their way to the cemetery to tend their husbands’ graves. They invite her to accompany them and then, a scene reminiscent of an ancient Greek chorus unfolds. Konsandina Dounis renders it thus: “Huddled around, they lit their candles and then, to cool down, lifted their skirts and each one sat on their husband’s grave. I asked each widow to tell me her story . . .”

The five vignettes that follow are heavily laced with chthonic sexual tension, and this not just because the widow’s husbands are buried beneath them, while they lift their skirts and straddle them. When she meets them, the narrator makes sure that the reader understands that the widows, in stark contrast to their mouldering husbands, are fecund and full of life: “You’re all so vivacious and attractive, how did you get rid of your husbands . . . while you now visit them for solace?”

The first storyteller, is the widow Kalliopi. The choice of name is significant as in times ancient, Calliope was the muse who presided over eloquence and epic poetry; so called from the ecstatic harmony of her voice. Her husband, by consequence, was a drunkard who, having overindulged, would sing loud and not so tuneful lyrics. Furthermore, when in that state, “when he tried to put the key into the keyhole, it wouldn’t stand still!” a powerful metaphor for coitus while over the .05 limit if there ever was one.

Interestingly enough, having a drink with Kalliopi seemed to restore his key-mastery and Kalliopi’s appreciation of him: “How could I ever forget him? He was insatiable. If only he were still alive. I couldn’t care less how much he drank . . . sometimes I even sit on my grave, in case he rises out of it!”
Ourania, the second narrator, finds her counterpart in her namesake; the muse of astronomy and also of love and philosophy. Her story takes place by the fireplace, where the tickle of her departed’s moustache would lead to other “fun and games.” As the celestial orbs dance in heaven, so too did this muse, albeit for a brief time, for the music has now been stilled: “How can I dance, now that there’s no clarinet player?” It goes without saying that the long, columnar organ referred to therein is a powerful metaphor indeed. Significantly, she is the only one of the widows who does not name the owner of that instrument.

Demetra the third narrator is like her deity namesake; a restorer of harmony and order. Order she achieves by sitting on her husband’s grave not out of yearning or for pleasure but rather to prevent him from rising up to service the local womens’ plumbing (her words, not mine, I hasten to assure the reader), and harmony, by burying him with his wrench, (Konstandina Dounis employs the term ‘plumbing tool’ proving that she can be as equally cheeky as the author) an act of supreme emasculation or its opposite, depending on which side of the casket one happens to be.

Maria’s story is the inverse of that contained in the Gospel tradition. Being possessed of a feckless husband, rather than being led in safety to her own Bethlehem it is she who is forced to traverse strange lands, astride a donkey and on her own, in order to make a living. Yet her solace lies in her own capabilities, her slender waist and her ability to arouse her husband; a red velvet dress a relic of an enduring, albeit dysfunctional passion.

Antigone, like her namesake, is torn between passion and duty. In the face of her husband’s gross disrespect she makes a supreme act of emancipation, taking possession of what ‘traditionally belonged’ to a husband: “Are you going to come home and sow your own field or should I give it away before it grasses over?”

Upon the conclusion of the stories, the widows are invited by the narrator for coffee. This is not mere hospitality for there is polysemy in the Greek concept of that beverage. It is associated with consolation, whose original Greek word παραμύθι, has now come to signify a story. It is also associated with confession, since one can discern in the dregs of the cup traces of all things withheld, voluntarily or otherwise.

All these women are monolithic forces of nature. There is none of the ennui, self-doubt or insecurity that characterises the modern day psyche about them. Rather than seeking the causes of their fate, or to blame others, these women endure their lot and transform it into a life-giving force. They are in fact, elementals, titanesses and all the more seductive because of it.

Christos Avramoudas’ ostensibly understated illustrations accompanying the text are truly remarkable. Just as Armenian painter Arshile Gorky blotted out his mother’s hands (the only aspect of her which he remembered in the aftermath of the Armenian genocide) in his portrait of her, so too has Avramoudas portrayed the veil-clad widows without furrows or wrinkles. Their pain, anguish and unfulfilled desires lay deep within and cannot be revealed unless they choose to do so. By focusing on this salient feature of the widows, Avramoudas has lent their portrayal immense dignity, ably complementing the rendering by Mrs Baloukas/Konstandina Dounis.

There would not be many first-generation female authors in our community who would be brave enough to address the issue of senior sexuality, let alone link it so expertly, seamlessly and unselfconsciously to the elemental forces of life and death, as Mrs Baloukas. In the frustratingly few pages of The Widows and the Dear Departed which leave us frustrated, unfulfilled, aching and crying our for more, we have a female counterpart to Kazantzakis’ Zorba, at least as far as sexuality is concerned. It truly is a remarkable achievement.

In his illustrator’s note, Christos Avramoudas laments the loss of a genteel life via a process which Pasolini termed: ‘scomparsa delle luccione,’ the disappearance of the fireflies. In her masterful text, with the dexterity of a true illuminatus, Mrs Baloukas suffuses us with just enough light within the darkness of modern artificiality to revel in things basic, bounteous and beautiful, as bittersweet as these may be.