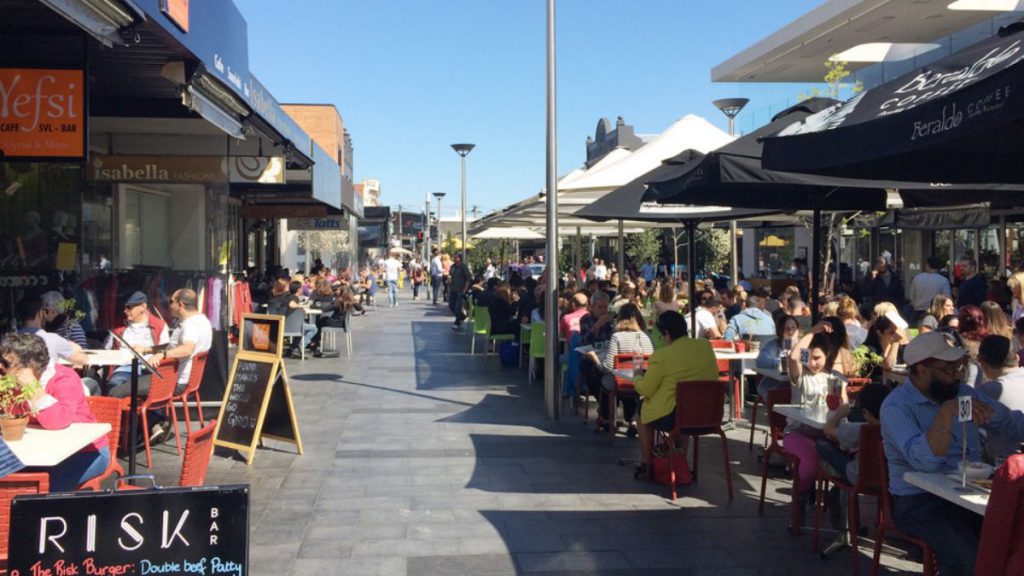 The year is 2017 AD. The civilised world is entirely committed to banning smoking from public places. Entirely? Well, not entirely. . . one small village of indomitable Greeks still holds out against the anti-smoking brigade, and proudly holds on to their butts, blowing smoke rings towards them.

Welcome to Eaton Mall. A stripe of land in Oakleigh so engulfed in the smoke coming from the cigarettes of the punters enjoying their frappé coffee alfresco, that even Monash City Council councillor Geoff Lake has likened walking through it to cleaning a chimney during Britain’s industrial revolution. Yes, the paved mall which has become synonymous with Greekness, offering safe haven to any nostalgic Greek who wants to feel at home – to eat grilled meat, to suck on the nozzle of their iced coffee for hours, to listen to loud bouzoukia, to engage in louder conversations about politics, to go for a drink when all other suburbs are asleep, to be Greek – is a sanctuary for smokers, hunted down by the officers of the ‘nanny state’ banning smoking from every indoor space, increasing the price of a pack of cigarettes to equal a mortgage deposit, and covering said package with off-putting images of death and sickness. Greeks have been fighting all this off for ages.

But now, they are bracing for their biggest fight yet. Because now, they are facing the most important threat of them all. As of Tuesday, changes to the Victorian Tobacco Act 1987 will ban smoking in all outdoor dining areas across Victoria. This includes Oakleigh.

It is no wonder that every media outlet covering the new legislation story felt the need to go to Oakleigh – smoking capital of Victoria – hoping to meet some irate punters, who cannot put up with the ‘nanny state’ asking them to put out their cigarettes or move elsewhere.

Yes, Greeks were in the news, and once again, it was for all the wrong reasons. And they did deliver: reactions covered a broad spectrum from the positive to the negative, from reluctant acceptance to fury, to the trademark as-Greek-as-tzatziki staple of passive aggression.

“What a lot of people don’t understand is that taking a cigarette away from an elderly Greek man is like taking away everything he’s got,” one man said to The Age. “They come down each morning… they could stay five or six hours. It’s their life, having a coffee, a cigarette, having some cake, socialising with their friends . . . that’s the way it’s always been.”

Some went instantly to defensive mode: “It’s just ridiculous because it’s my choice to smoke, and now I might as well stay home as I can’t eat and smoke anywhere,” another man told the Herald Sun, playing the age-old ‘freedom’ card. “It’s really affected my social life and I don’t think it’s right to take away people’s freedom.” Bingo!

Of course, you can’t argue with that logic. In fact, it’s completely futile to argue and try to reason with a smoker. You can’t. Pretty much the way that you can’t reason with a drunk, or a gambler, or an ‘ice’ addict. Addicted people cannot think clearly. A smoker may dismiss that notion – some even say that smoking ‘helps them think’, the poor souls, but whenever they open their mouths, it’s the addiction talking. Nicotine is a highly addictive substance; to think that it does not affect the way the brain works, is stupid.

Of course, everybody is entitled to their little vice, whatever that may be. But they should have at least the decency, the honesty, and the courage to accept it as such. And though it may be unfair to compare smoking to alcoholism, to gambling, or to ice, we should be able to distinguish between the severity of each respective addiction, as well as its impact. But if alcoholism, illicit drugs and gambling can lead to antisocial behaviour, smoking is an antisocial behaviour in itself, polluting the air that non-smokers breath.

Which makes the new legislation already seem like a failure in the making. At first glance, the measures seem to be tailored for those who can afford them: cafes and restaurants, that can afford to install a four-metre buffering area between smokers and non-smokers (i.e. fewer tables), that can stop serving food in the morning (i.e. lower sales), that can put up two-metre high partitions/walls between their customers.

Even if they do that, nobody can ensure that smoke won’t travel from one restaurant to the next. This, along with the complexity of the laws, has already led people like Cr Lake to consider the new law as “a recipe for absolute chaos and disorder”. Good. Greeks thrive in chaos and disorder.

Of course, there’s a chance that all this will end up in smoke, that everyone will obey the law, either by accepting the inevitable or for fear of the ridiculous fines. But if they decide to resist, the Greeks of Oakleigh certainly have the know-how. They have learned from the best, and they can still look up to them for inspiration. Because it is not by chance that the anti-smoking legislation has not been implemented in Greece, despite being put into effect in 2009. A half-measure at best, reluctantly devised by authorities obliged to comply with the European Union legislation, it was met with guerilla-type resistance from the start. There were bars and restaurants bribing officers who were sent out to impose fines, others trying to find loopholes to be exempted from the consequences – or the all-too common phenomenon of large bouzoukia nightclubs replacing their ashtrays with disposable plastic cups which the punters were expected to hide under the table, thus creating in the white cup a symbol of resistance and civil disobedience.

“Greece’s Antismoking Effort Has One Major Problem: Greeks”, read the headline of a Wall Street Journal story, a few weeks ago, reporting how ‘Greek citizens take pride in puffing where they please”.

Some of us have known that all too well, coughing our way through the smog created by our friends.

Some of us are also old enough to remember the first time – 25 years ago – that the Greek government started printing health warnings on the packages:
“The ministry of health warns: smoking can cause cancer/heart disease/ erectile dysfunction.”

The last one at the very least had indeed raised some amount of concern.