The GACL’s art exhibition Antipodean Palette is now on Photographer Aphroditi Karalis is curating the Greek Australian Cultural League of Melbourne’s (GACL) ‘Antipodean Palette’ this year showcasing the works of practicing artists in a variety of media.

Karalis joined the GACL administrative committee last year and has put together a striking selection for the seventh annual group art exhibition to support visual arts in the Greek community.

Neos Kosmos got a hold of Karalis on Thursday while she was putting together the final touches for the opening and had a chat about her work, her inspirations, her involvement with the GACLand the challenge of being both an exhibitor and an organiser.

What is your connection with the arts?
I completed a Diploma in Illustrative Photography in the 1990s at Photography Studies College. Before then I was the one holding the camera – an old Yashica – in my family. My parents had bought this camera on one of our holidays to Europe – I was nine years old at the time. I remember that although this camera was simple to use I just couldn’t get the exposure right even after using it for years. So I have a feeling that this may have set me on my photographic path -trying to get that perfect exposure, though I never did manage to do that even in the digital age! These were the days of 35mm film so if you stuffed up you had no idea until you picked up your film weeks later from the chemist; I can’t even remember where my mother would get the film processed.

More recently I’ve had the opportunity to coordinate the annual photographic competition at my ‘day gig’. We had eight categories and anyone entering was able to submit up to eight images. It involved setting up boards with photos under each category for voting, designing an online voting system, arranging printing and framing of the winning images, arranging a pop up exhibition of the winning work and distributing the work to the various departments for display for a year until the next competition would roll around where it would all start again. This had been going on for several years and has given me the experience and confidence to coordinate the ‘Antipodean Palette’ exhibition.

What kind of photography do you focus on?
The kind of photography I focus on is very different these days. I have a day time gig working in an office – the job is difficult in that you’re sitting down all day. Do this every day for 18 years and it creates all sorts of problems for you physically. So a few years ago with my new iPhone I began exploring the city before work, after work and on weekends. The digital age has opened up another world I could never have imagined. I was always quite impatient when it came to film processing – by the late 1990s waiting four hours was way too long! So a device that’s light and easy to carry around that processes images and effects immediately was like WOW for me. I still marvel at the technology. But the interesting thing is that although I’ve totally embraced technology my work has a nostalgic feel about it. Creating something in the present that will become the past is intentional, and so all the apps I gravitate towards for editing my images allow me to create a moment that will no longer be – to capture something that may never exist again, like time. And so everything that makes up the city is my inspiration; people, streets, graffiti, buildings, nature, rivers, beaches. How did you become involved with GACL and the ‘Antipodean Palette’? Have you participated in previous events?
After discovering Instagram in 2013 I would set projects for myself. For example, every day for a whole month I would find a clock (that was working) and photograph it. I would post it on Insta with a quote that I found on the internet relating to time. This would capture forever an exact moment in my life. You see, I was looking for time. Working on this concept of documenting a moment in time for a different project I photographed 30 galleries in 30 days. This was not easy as I was scouring the Art Almanac and everything else online to find galleries that were opened every day. As you are aware, most galleries close early in the week so I would end up visiting a heap of galleries on weekends so that I could continue to post to Insta daily. Steps Gallery was on my list and because it featured Greek Australian artists it caught my attention. It was 2015 and I had no idea who the Greek Australian Cultural League was and what they did. I met one of the artists on the day I visited Steps Gallery and walked away inspired. In 2016 my projects differed. I decided to challenge myself to workshops. I threw myself into all manners of art classes. The goal was to participate in 12 workshops and create a body of work with only one motif in common. I contacted the artist I had met at Steps Gallery. Anne offered a collage workshop and also invited me to the ‘Antipodean Palette’ exhibition opening night. That’s when I decided to join the league as a volunteer. I thought it would be great to help out the coordinator for the 2017 exhibition. Only, the coordinator took a sojourn and somehow I found myself in the role.

What does your role as coordinator entail?
The role as coordinator together with the committee members entails, but is not limited to, going through the applications and selecting the group, developing relationships, promoting the exhibition, arranging rosters and arrival times of the work.

The thing is, without the tireless support and commitment of the ‘Antipodean Palette’ committee and the artists themselves the exhibition would not be happening.

It really is all about team effort in getting the exhibition off the ground. And of course in between all of that I had to think about my own work and how I was going to present it. 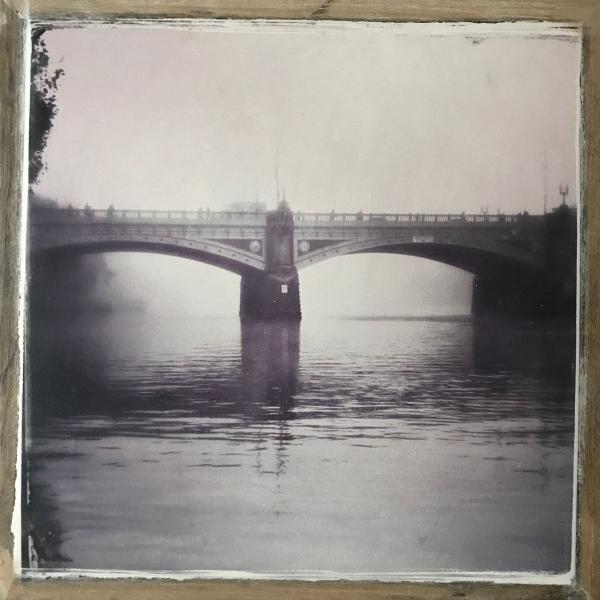 Were there any especially challenging moments whilst organising the event?
What event doesn’t have challenges? It’s all about support, problem-solving, communication, and being open to change in order to move forward. And support doesn’t just come from the committee but also the artists. Setting up on Thursday and making the work flow in the space at Steps with the variety of styles was no easy feat. You need feedback as a coordinator or whatever job you’re doing – the feedback in this case was coming from the artists and their work. I had arranged the work and the positioning of each piece (with the assistance of the committee) on paper but until you see the actual work you really don’t know how it’s going to feel in the space.

The thing is I’m constantly learning which is something I love, and yes I have my moments where I may be reactive, but hey, it’s in my blood! Well, that’s what my cousin in Greece says anyway.

What makes this year’s art show special in your opinion?
This year’s exhibition is special to me not only because I’m coordinating but because in my opinion the group is so amazingly diverse. The approach for every artist to their work is so different – technique, chosen medium, and subject matter. The work is vibrant and exciting and inspiring. There’s so much passion that is poured into these pieces. There’s so much that comes before a work is even produced and I believe you see it here.

Masonik: They spent five weeks with backgammon players in the kafeneia of Athens – which are featured in the video installation.
Stella Papas: Her work in this exhibition features symbolism in nature not to mention cutting her photographic teeth in her father’s darkroom (Hionis Studios).
Con Constantinou: His career has taken many twists and turns, as a chiropractor, graphic designer, and mixed media artist. His work explores the unseen beauty within.
Angy Labiris: His landscapes are made up of spatula and oil sticks which makes them so immersive you can almost hear the forest birds, the trees in the breeze, the water trickling, the scent of the undergrowth.
Nicholas Katris: His work is a study in the beauty of nature. His landscapes and portraits are detailed, vibrant and distinctive.
Effie Sgardelis: Her work is full of texture and colour exploring internal nature and memory.
Tracey Yannopoulos: Immersed in Greek culture she is fascinated by the mysticism and mesmeric Orthodox icons and history of the Byzantine world.
Vasy Petros: Her breath-taking paintings are made with discarded mass produced media paper.
Thalia Andrews: The colour and light in her paintings makes you ponder the beauty of nature.
Steve Messinis: In his work Meditated Memories the artist uses random digital images to portray how our memories can be reconstructed and reshaped.
Katerina Priftis: In her series Moments on the Beach she surprises her audience with fun and unexpected elements.
Theo Papathomas: The Australian landscape in colour, form and figurative symbols” is how Theo describes his work but it’s more than that; his paintings take you on a journey.