Cypriot Efthios ‘Tio’ Ellinas is a confident teen out to make his F1 racing dreams a reality. 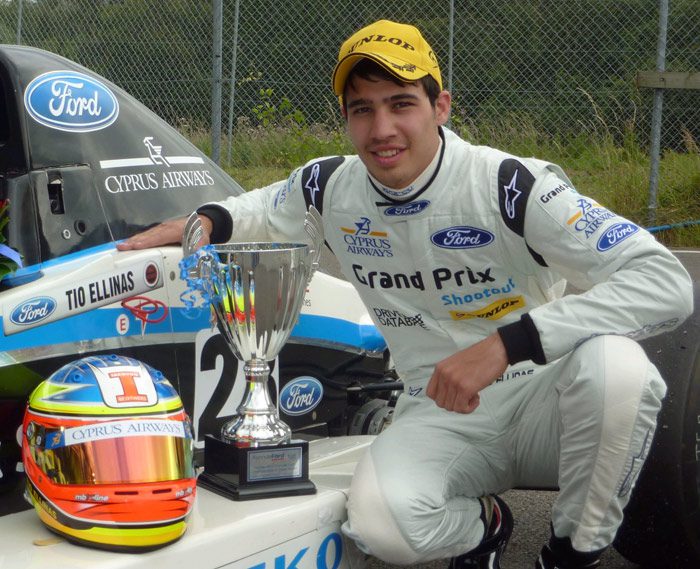 Tio Ellinas is a rising star in F1 racing in Europe.

Millions of teenagers fantasise about becoming a Formula One racing driver, but for eighteen year old Cypriot Efthios ‘Tio’ Ellinas, his dream of competing in the world’s most glamorous sport has a very good chance of becoming reality.

I think people won’t believe it can happen but it doesn’t affect my performance. I’m doing my best so maybe I can prove to them that it’s possible.

The motorsport fraternity has been keeping a close eye on the Larnaka teenager since F1 talent spotter and driver trainer Rob Wilson confirmed his skills could take him to the top of the sport.

“Tio Ellinas is certainly talented enough to succeed in Formula One and should be on every team’s list of young drivers to watch,” he said, after assessing Tio’s driving skills during a Grand Prix Shootout competition last year.

Tio triumphed over more than sixty young drivers to win the event and earn a season racing for JTR in the Dunlop MSA Formula Ford British Championship, an established route that has helped to shape the careers of some of the world’s most successful drivers, including Mark Webber, Jenson Button and Ayrton Senna.

Despite his phenomenal achievements Tio admits he was surprised to hear the racing legend’s comments.

“I know that I am fast and that I have something, but to show that to him was difficult because he’s a driver and a driving coach,” he says.

“I felt a bit surprised but I know I’ve got the talent and can go further in the future.”

Tio names Senna as one of the drivers he most admires, and with whom it can be said he shares similarities.

The Brazilian began go-karting at the age of four, eventually winning the British and European Formula Ford championships and progressing to Formula Three before making his F1 debut with Toleman in 1984.

Following in the footsteps of his role model, Ellinas entered the sport at the age of seven, accumulating nine national and one world karting title prior to the Shootout and a place in the championship, with the chance to prove he’s worthy of a Formula Three spot in the future.

In April, after only five testing sessions in the JTR Mygale, Tio narrowly missed out on becoming the first driver since Senna to take pole position in his inaugural race.

The Cypriot started from second on the grid and despite mechanical problems, took 4th place in his championship debut.

During round nine at Castle Combe in June, Ellinas broke the circuit record and became the first driver to record a 100mph Formula Ford racing lap of the track.

An increasingly confident Tio set a new lap record and recorded his first victories in rounds eleven and twelve at Rockingham last month, taking him into the championship top five.

With thirteen rounds left he hopes for a repeat performance at Silverstone next weekend to accrue vital points for a place in the top three.

Manager David Fleming is currently looking for sponsors to finance advancement to the next level, while Tio asks that his compatriots support him in his quest to achieve what some consider to be an almost inconceivable aspiration.

“I will try harder,” he promises.

“I think people won’t believe it can happen but it doesn’t affect my performance. I’m doing my best so maybe I can prove to them that it’s possible.”