‘We’re talking about legislation, not about religion’

With the postal survey on same-sex marriage under way, the chair of the Greek and Gay Support Network John Tzimas clarifies things 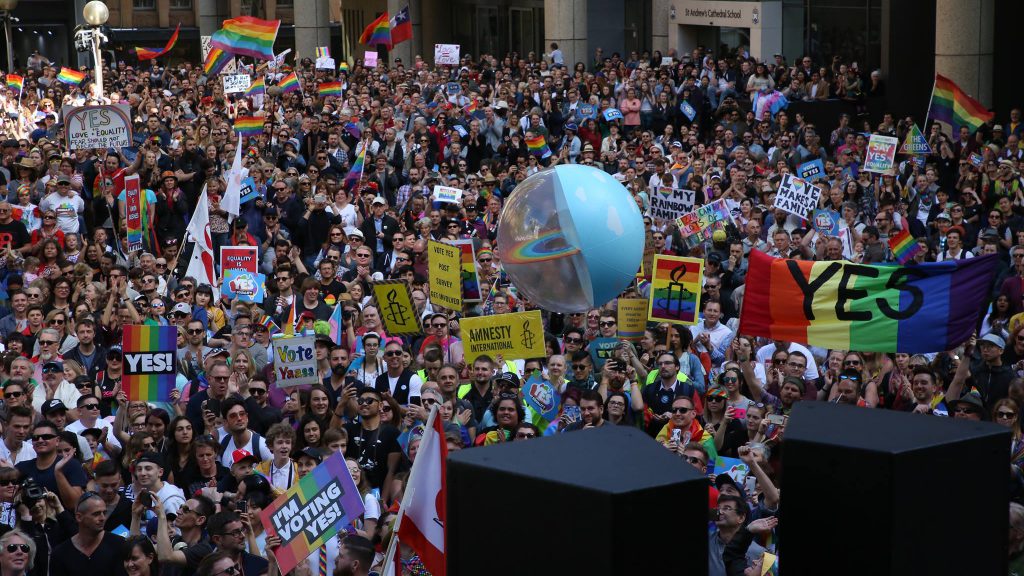 Thousands take to the streets of Sydneyto march in support of same-sex marriage on 10 September. Photo: AAP via AP/NEWZULU/Richard Milnes

This week was the official start of the postal survey process to decide whether or not parliament will review the legal definition of marriage to include same-sex couples. As ballot papers make their way to Australian letter boxes, amid a fierce debate, it is important to give voice to those most affected by the possible outcome – the members of the LGBTI community.

For more than twenty years, the Greek and Gay Support Network has been the point of reference for LGBTI people within the Greek community, offering a safe place to discuss issues and problems in an often hostile culture. Focusing on the social and networking aspect of its members’ experience, the organisation has kept out of politics. “There has always been a reluctance to become more politically active, because a lot of our members were not out to their families,” says John Tzimas, chair of the organisation. “There are other organisations doing all the political work and campaign for marriage equality, and we have always supported them,” he adds.

Now, these groups are bracing for what might be the one of the most important chapters in the history of gay rights activism in Australia, and in a way, the mere fact that this postal survey is taking place serves as proof that things have changed. John knows it all too well, through the experience of the network. “The need to support started dying down,” he says. “It is still relevant, but not as important as it used to be. The older generation is now more settled; we established our networks, our friendships, our relationships, while the younger generation, the 20-and-30-year-olds don’t have that much of a need to get support. In most cases, their families are fine with their situations. Of course, we still get calls from people who are struggling with their parents and looking for someone to speak to, and we get a lot of messages on our website and our Facebook page.”

Lately, these messages have been mostly expressing outrage for the incidents of Greek Orthodox priests speaking about violent action towards gay people in their preaching against same-sex marriage. “These incidents outraged a lot of Greeks, gay and straight,” says John. “It was harmful; a lot of people got distressed, we got many calls and messages, so we sent a letter to the Archdiocese. We don’t have an issue with the fact that they want to campaign against marriage equality. We don’t believe that they have the right to say anything, because it’s a political decision, not a religious one, but it’s their option. Just like any other organisation, they are entitled to take a stand. But vilifying and inciting violence is too much. From our point of view, the Archbishop needs to take leadership. Because, unfortunately there are a few who agree with this hateful preaching and don’t understand the gay situation. Our parents’ generation take a lot of things as gospel; if a priest says something, then it must be true. Their beliefs are quite strong. But everyone treats religion their own way. There are those who are fanatical and will go all the way and the rest of us who are a little bit more liberal in our opinions”.

Asked to comment on the official arguments presented by the Greek Orthodox church of Australia and the debate over the postal survey, John says that the current marriage law is discriminatory. “Technically we had same-sex marriage up until 2003”, he says mirthfully. “But no-one really did anything about it. And then the law changed to exclude same-sex couples from the Marriage Act. We’re talking about an Act of parliament here, we’re talking about legislation, we’re not talking about religion at all. Australia is a secular country. As for the argument that this will suppress freedom of expression, there is enough law in this country to protect everyone regardless of what debate you are talking about. There is nothing to stop them teaching their religion. They don’t have to teach gay marriage, this is not an issue. What they need is to stop teaching hate”.

Lately, the Greek and Gay Support Network has also gone into teaching, taking on an initiative to create bridges with the older generations through a joint programme with the Pronia. “Some funding became available and we decided that it was time for us to start becoming a bit proactive within the Greek community, and try to start changing some of the impressions that [older] Greeks have about gay and lesbian people. We approached Pronia because they have better expertise.” John has high hopes for this project, which is called Diversity – Starting the Conversation.

“It’s basically getting information to the Greek community about gay and lesbian issues, letting them know that we exist,” he says.

Asked to share his insight on the broader Greek community’s stance on the issue of same-sex marriage, he is very cautious. “For lack of statistical analysis, my feeling is that they are 50-50 on that issue; depending on the upbringing and background of the individual some will say ‘yes’ some will say ‘no’. As a generalisation, I suspect that the older generations will vote ‘no’, primarily because of their ties to the Church. From our generation onwards, there will be a larger proportion of voting ‘yes’ rather than ‘no’ and the younger ones will have a larger majority voting ‘yes'”.

As for the main argument from those Greek Australians against same-sex marriage that we are steering away from our traditions, John responds with a laugh: “Do you want to talk about Ancient Greece, or Alexander the Great and his history?” Getting serious he adds, “It’s a different world. Traditional families don’t exist anymore. Families are fluid, they move with the times, hopefully. The things that we used to accept in the 40s and 50s are not acceptable anymore. Women have the right to vote. Indigenious Australians have the right to vote, which they didn’t.

“The structure of family has changed. Some have one parent, some have two. Some are fortunate enough to have four. Who’s to say what’s a perfect family and what isn’t?”