A tale of Trades Hall, Lemnos and the bloody fields of Krithia 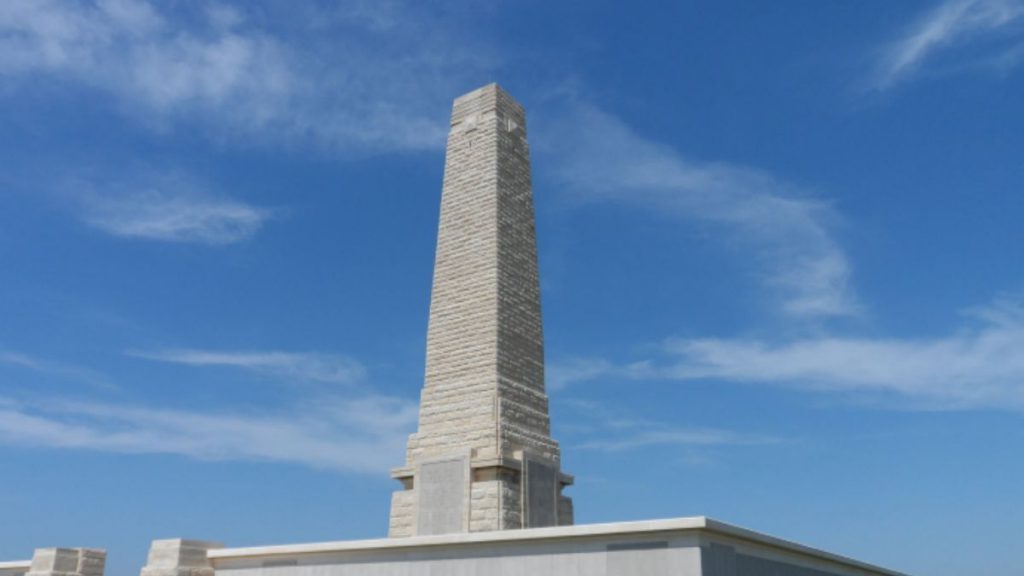 The Helles Memorial to the Missing, on the Gallipoli peninsula. photo: CWGC

Melbourne’s impressive Trades Hall Building was once the host to a little known celebrated send-off. It was in this classically-inspired building that a function was held on 1 October 1914 to honour a group of Anzac volunteers about to depart from Port Melbourne.

They were all Victorian members of the Federated Engine Drivers Federation and Firemen’s Association (FEDFA). Among the 10 trade union members was Colour Sergeant William Edwin Davis, the former Victorian president of the union. William and his comrades would leave the classical columns of Trades Hall and voyage to Lemnos on an ultimately fatal journey to the killing fields of the Gallipoli peninsula.

I became aware of William Davis through the research of author Malcolm McDonald. A former engine driver and secretary of the FEDFA, Malcolm discovered the story of the Trades Hall send-off while writing a history of the union.

I discussed William’s story with Malcolm over a lunch of yemista followed by Greek coffee prepared by his wife Flora in their home in Melbourne’s Burwood. Flora hails from the village of Ligaria, near Serres, her parents having fled on foot there from eastern Thrace in the early 1920s as children. Malcolm and Flora met not long after she arrived in Australia, introduced by mutual friend Spiros Kokkinos. Malcolm remembers well the times they spent at Melbourne’s Democratis Club with Spiros who was club president for a time. Spiros was also one of the volunteers who promoted Neos Kosmos in the early days of the newspaper.

William was born in Melbourne’s Fitzroy. An only son, he grew up to become an engine driver and active in his trade union. He was soon married to Maud. By 1914 they had seven children and were living in Prahran. Life was no picnic for working class families like the Davis’. William’s wages were hardly enough to keep the family afloat, with Maud taking in sewing to make ends meet. Every penny had to be accounted for and there was no room for extravagances.

Reading the history, it is clear that William and Maud were a team. Maud shared his passion for social justice and worker rights. It was Maud’s evidence before Justice Higgins in 1911 detailing the frugal reality for a family living on workers’ wages that resulted in significant wage improvements for engine drivers.

William left all of this behind when he enlisted in the Australian Imperial Force on 15 August, not long after the outbreak of the war. As a former militia volunteer, William was appointed to the rank of Colour Sergeant in the 6th Australian Infantry Battalion.

William and the battalion sailed from Melbourne’s Princes Pier on 19 October 1914 aboard the HMAT Hororata – not far from the location of Melbourne’s Lemnos Gallipoli memorial. Malcolm wonders what Maud and the children felt as they waved him off to war.

After a period of training in Egypt, William departed Alexandria and arrived at Lemnos in early April. A photograph from the time shows the battalion in Mudros Bay aboard their troopship Galeka. William would have marvelled at the vast armada of some 200 warships and transports being assembled in the bay. At Lemnos William would have spent the time as all other diggers did on Lemnos – training for the coming landings at Gallipoli.

The morning of 24 April was a sunny day on Lemnos, “real Australian sunshine” one soldier recorded. William and the 2nd Brigade sailed from Mudros Bay, headed for the Bay of Pournia on Lemnos’ northern shore. Here they lay at anchor until their departure in the early hours of the following day. This quiet bay features well in Lemnos’ history – for not only did the Anzac’s depart from here, but they were following in the wake of Homer’s Odysseus who, legend says, sailed from here to Troy. And here too Lemnos’ 15th century warrior Maroula Komnenos defended Kotsinas Castle against the Ottomans. Her statue stands sentinel at Kotsinas on the edge of the bay.

William took part in the landing at Anzac Cove as dawn broke on 25 April and the subsequent defence of the beachhead. His service would be rewarded by his promotion to Second Lieutenant on 28 April, barely three days after the landing. But William’s Gallipoli would take him and the 2nd Brigade to the southern end of the peninsula and one of the most murderous attacks of the whole campaign – the Second Battle of Krithia.

William left Anzac Cove on 6 May and by the morning of 8 May was in position behind the lines at Krithia. William’s unit was ordered to attack with barely ten minutes notice. William’s section was one of the advance companies of the battalion when it launched its assault.

Spreading out and rushing forward to the enemy lines more than 1,000 metres away. William faced increasing rifle and machine gun fire as well as shrapnel from artillery shells bursting overhead. Ottoman snipers picked off the advancing Australians. The enemy fire was so devastating that the attack was suspended at 6.30 pm, the Australians having barely crossed the half the ground required.

Over 50 per cent of the battalion was killed, wounded and missing. Many officers were killed along with their men, including William. We don’t know if he was killed instantly or died after lying on the battlefield. A photograph from that terrible morning shows the carnage exacted on the Australians. The official British historian of the Gallipoli campaign called the battle Australia’s “unrecognised Balaclava”. Although never captured by the Allies, the village would be devastated by Allied bombardments and left in ruins.

In 2015 I visited the rebuilt village of Krithia (now named Alcitepe) on my journey to the Helles Memorial to the Missing at the end of the Gallipoli peninsula. The Asia Minor catastrophe saw the Greek villagers of Krithia forced to flee to Greece and establish their new village of Krithia to the north of Thessaloniki, not far from Flora’s village near Serres.

William’s death is recorded on the Helles Memorials’ sandstone memorial walls, one of the 248 Australians amongst the over 20,000 Allied names recorded there. His name may well have been etched by one of the many local Greek stonemasons who had returned to the area following the end of the war and who worked on the memorials on the peninsula. It was also recorded in his home suburb of Prahran, in the gilt lettering on the grand Memorial Wall of the local RSL Hall.

William was also missed by his fellow trade unionists. In 1915 the Union recorded “their admiration for their late comrades who died fighting for the Empire” and “their sincere sympathy for those whose hearts were sad for their loss of their beloved ones”. The union’s journal recorded the “deep regret” of the union’s Victorian secretary at the news of the death of ‘Comrade Davis’ and on behalf of all Victorian members “extend[ed] their heartfelt sympathy to Mrs Davis and her family in her hour of trial”.

William Davis’ story reveals more of the story of Anzac and how it affected society. With his death, Australia and his family were denied the future contributions of William and all the others killed and wounded in the war. We know that later in the First World War, Australian society was divided by the two conscription referendums unsuccessfully launched by the Hughes government. William was one of those who volunteered – as all diggers did – and indeed the majority of enlisted men voted against the introduction of conscription. Many trade unions were in the forefront of the movement opposed to conscription. We don’t know William’s view but as a prominent trade unionist it is likely he would have opposed its introduction. The success of the campaign opposing conscription is commemorated on the walls of the very Trades Hall that witnessed William’s send-off.

Some years ago Malcolm McDonald made the journey to Gallipoli where William’s journey had ended. More recently, Malcolm and Flora made their own pilgrimage to Lemnos, following in William’s footsteps. They arrived on Lemnos from Kavala and were guided through the island’s war cemeteries, and the ancient site of Poliochni, by a generous local. Staying in one of Myrina’s harbourside hotels, Malcolm and Flora sat on the very harbour were hundreds – if not thousands – of Allied soldiers and nurses walked in 1915. And no doubt many would have enjoyed the wonderful seafood in the local fish restaurants, as Malcolm and Flora did.

The story of William Davis – and that of Malcolm and Flora McDonald –reveals again the web of connections linking ordinary Australians and Hellenes through our common Hellenic Anzac story.

* Jim Claven is a historian, freelance writer and secretary of the Lemnos Gallipoli Commemorative Committee (LGCC). He is working with committee president Lee Tarlamis on a commemorative event to be held at the Lemnos Gallipoli memorial honouring Anzac trade unionists such as William Davis. Malcolm McDonald is also a member of the LGCC. Jim Claven thanks Flora and Malcolm McDonald for sharing their story. Jim can be contacted via jimclaven@yahoo.com.au.