Greece and Australia both tangled in mining investment conundrums

For both countries, a lot is at stake 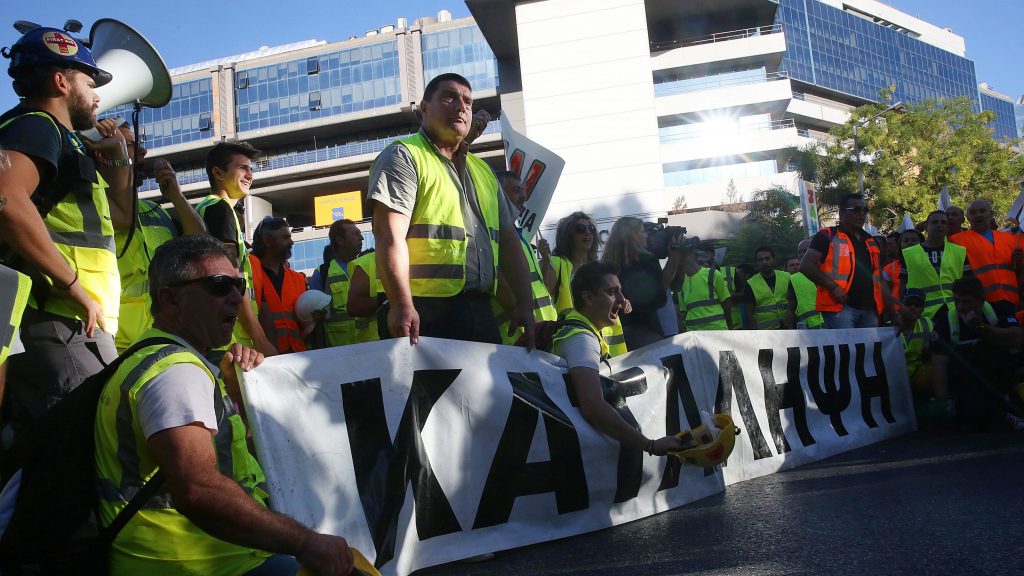 Miners from a gold mine in northern Greece shout slogans and bang their helmets on the ground during a protest against the suspension of Eldorado’s investments in Greece, outside the Environmental Ministry in Athens. Photo: AAP via EPA/ORESTIS PANAGIOTOU

Every time I read an analysis about the perils that the Australian economy faces, there’s always a moment where I laugh. It unmistakably happens whenever someone mentions that Australia is at risk of losing its AAA credit rating. I can’t help it. Because I come from a country with a credit rating fluctuating from B- at best to ‘rubbish’.

And yet, despite their obvious, massive difference, the two countries are currently facing a similar problem. They are both committed to pursuing an investment which is, by all accounts, bound to cause irreparable damage.

For Greece it is the goldmines that Canadian mining giant Eldorado Gold has been slowly trying to exploit in Halkidiki, meeting various obstacles in the meantime.

For Australia, it is the Carmichael coal mine that Indian mining giant Adani is building in Queensland’s Galilee Basin, a massive investment, subsidised by the federal government with $1 billion.

The company already faces a possible multi-million-dollar fine after sediment water eight times above authorised levels was discharged from the Abbot Point coal terminal, with locals corncerned about the potential damage to the wetlands. Protesters are warning against further damage to the already challenged Great Barrier Reef, as well as to the broader environmental risk that may affect the land. The investment has already been met with resistance by the Wangan and Jagalingou traditional owners of the land who question the validity of the deal that saw native title passed on to the government.

Something similar has been happening in Greece.

Anyone who has been following the issue knows that the broader region around the small town of Ierissos – a place largely dependent on tourism, fishing, and farming – has been transformed into a no man’s land. The forest has been all but destroyed to make way for a large dam and tailings pond, filled with liquid waste contaminating the soil and endangering the water supplies. For the past few years, the area has also become a battle zone, as locals have persistently protested against the investment, fearing the effects that such a large-scale toxic industrial operation will have on the health of children and livestock.

Eldorado Gold has just conceded to stay, after issuing an ultimatum that it will leave the country if the Ministry of Energy does not grant a permit to allow for the construction of a smelter in Skouries. The flash-smelting method, proposed by Eldorado, was not in the initial contract and is considered to be unsuitable for the Halkidiki project, given that it will release 20,000 tons of arsenic in the air annually well above accepted levels, which is the reason behind the local community’s ongoing campaign against the project.

In both cases, the main argument for the projects to go forward is the opportunities for employment they create. Eldorado Gold claims to employ 2,000 people in Greece, which is stricken by the highest unemployment rate in the EU.

Adani also pledges to create thousands of jobs, and has already started calling for expressions of interest.

For both countries, a lot is at stake. Greece has to decide whether to further pursue mining and exploitation of natural wealth, or focus on the tourism industry.

The Eldorado coalmine, situated in an area of high touristic value, which attracts hundreds of thousands of tourists from inside Greece, Russia, Germany, the UK and other countries, will definitely impact the natural beauty and may contaminate the area, undermining the touristic potential.
Similarly, the Great Barrier Reef is reportedly dying, which is bound to affect the area – one of the most visited areas in Australia, attracting millions of tourists.

Australia has to choose whether to issue a death warrant to the area in order to honour a commitment to an industry that is dying. The whole planet is turning its back to coal, as an energy resource which is to blame for climate change. And yet, the Coalition Government still sees the country’s reliance to coal as a viable way, planning to continue exporting coal for as long as possible. The Energy Minister, Josh Frydenberg, confirmed that just a month ago. The former PM, Tony Abbott, who still plays a significant role in the Coalition, stated this week that he will vote against measures that see Australia embracing renewable energy sources.

This, in the same year that Elon Musk, arguably the world’s leading entrepreneur, expressed interest in building the world’s largest battery grid in South Australia, creating a pathway for the country’s future as a leader in renewable energy (which is bound to create as many jobs – if not more).
And here is where the similarities between Greece and Australia end. Greece does not have a high-profile investor coming to the rescue. The country has much less legroom, being desperate for any sort of investment that will create a way out from the crisis, hence the government’s commitment to the Eldorado mines.

Still, Greece just set in motion a €1.5 billion plan to create 1300 MW worth of renewable energy projects by 2020, with the assistance of the EU, exploiting the country’s unlimited solar and wind power potential.

Australia could do much more. It could even appease those who fear that renewables will raise the cost of energy for households – if a gigantic coal mine can be subsidised with $1 billion, so can any plan to make renewable energy more affordable.

All the country needs is to listen. Listen to entrepreneurs. Listen to the communities. To indigenous people. To the tourist industry. Just listen. It’s the least a world-leading AAA economy can do.