Dean Kalimniou reviews a particularly special Sidney Nolan exhibition comprising of works inspired by the artist’s travels to Hydra, and now on show at the Hellenic Museum As a child, Sidney Nolan’s Ned Kelly often gave me nightmares. In my feverish hallucinations, the stark, black, absolute Ned Kelly of his canvas, would loom over my bed, against a background of Santorini blue. Moments later, he would metamorphose into a menacing parody of my own black-veiled grandmother – in the dream a snarling crone, firing maledictions from a mouth that could not be seen. Inevitably, she would adjust her veil and, glimpsing at her pallid skin, I would notice that she had no eyes. Seconds later, the sinister figure would once again change, this time into a sort of veiled, helmeted Minotaur, an unnatural conflation of Ned Kelly, my grandmother-parody and the denizen of the labyrinth. It was always at the precise moment when horns could be discerned beneath the veiled helmet, that I would wake up, terrified.

Sidney Nolan never met me, or my grandmother, though he was a regular patron of Greek Orthodox Community of Melbourne and Victoria’s secretary Costas Markos’ fish shop. Yet in my mind, we are all inextricably linked. In November 1955, having completed his iconic Ned Kelly and Burke and Wills series, Sidney Nolan travelled to Hydra. His sojourn there, served as inspiration of a remarkable series of images exploring both the contemporary and mythological world. That series, a singular coup for the Greek community, given that Sidney Nolan is one of Australia’s greatest artists, is currently on display in the Hellenic Museum’s exhibition ‘Sidney Nolan, the Greek Series.’

One approaches the series, through the neoclassical vestibule of the former Royal Mint building, fringed with reproductions of classical sculpture. Entering the exhibition space is like abandoning the formulaic certainties of the world as we understand it, and entering a labyrinth. The exhibition space is small and dark, punctuated with overhanging bulbs that appear to illuminate only that which they wish you to see, by some inscrutable yet omnipresent demiurge. As such, the Nolan paintings that stud the murky walls in multitudes, on top, below and beside each other, mimicking a mosaic as well as an iconostasis, provide the only ostensible means of escape into another world, the only glimpse into another possible reality, or a multiplicity of these, as manipulated by the artist or the curator. Placing Sidney Nolan’s images of Hydra in claustrophobic proximity to each other thus creates a kaleidoscope of cacophonous images.

If the viewer is to resolve some kind of melodic narrative to this cacophony, it must be through an interpretation of the paintings themselves. A series of priests adorn the walls, all of whom seem to assume the form of a remarkable prototype of our own Father Lefteris of Red Hill. This priest is the antithesis of Nolan’s Ned Kelly. Instead of the black of Kelly’s armour, Nolan’s priest wears white. Where the only thing that is not black in Nolan’s Ned Kelly is the empty space in the helmet where Kelly’s eyes should be, the priest’s eyes in each painting are obscured by black sunglasses. In this way, white, a symbol in western culture of purity and innocence, becomes subverted. This Greek Orthodox priest is the negative image of Ned Kelly and he works as much as a symbol of the ambivalence of the positive and negative in Greek culture as Ned Kelly does for Australians. In one particularly remarkable portrait of the priest he presumably stares at us nonchalantly through his impenetrable sunglasses, while a flayed skin bearing a time-piece, hangs next to him. Does this incongruous depiction refer us to the myth of Marsyas, who was flayed alive for having the temerity to challenge a god? Is the viewer Marsyas, or is it indeed the priest, with his pretensions of mediating the divine? Or rather, is it contemporary culture itself, in the form of time that is our god and is being slain, in a sacrifice whose temporality and meaning, we whose existence is as finite as it is infinite, given that we exist within and outside the frame of the painting’s existence, and are thus god-like, are unable to appreciate? Tempus fugit indeed. 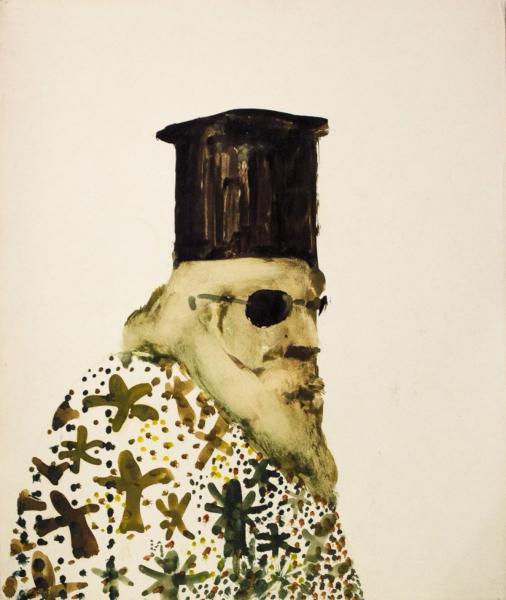 I proceed along the walls, assailed by the images. The experience of being in the darkened close room for more than 15 minutes is unbearable, existential agony in practice. I have no idea whether this is what Sidney Nolan intended, but to me it aptly symbolises the way in which stereotype, myth, and imagined memory transform from thought bytes and clichés, to rediscovered primeval burdens that flood the consciousness, often with incomprehensible meanings and a good dash of inherited guilt.

Finally, I stand before the embodiment of my childhood nightmares. There on the wall the image that, somehow, I have always known would invade my waking moments. In ochre, the colour of earth, wherever one comes from, is the paradoxical approximation of a Minotaur that, depicted like an Egyptian pharaoh or a preclassical kouros on a vase painting, with head tilted to one side, also looks like a kangaroo. Moreover, this quintessentially Australian version of the Minotaur appears to be engaged in the process of assuming the form of Ned Kelly, or is the opposite process taking place, with Ned Kelly finally being placed into context as the personification of the Minotaur? After all, in order to make our civilisations safe, both Minotaur and Ned Kelly must die. Evidently, the need for any society to foster myths about monsters that lurk beneath the bed which both horrify and fascinate, is key to an understanding of Nolan’s symbolic palette.

Although it probably was not the artists’ intention, Greek emigration to Australia still being in its infancy at that time, Nolan’s Kelly-Minotaur could also be employed as a telling paradigm of acculturation, pinpointing the manner in which our community has negotiated, adopted, discarded, absorbed or accreted the values, symbols, and myths it found in this country, to those which has inherited, to the extent that it expresses and thinks of itself in an equivocal hybrid manner, one in which it cannot in itself discern its constituent parts from the amalgam it has become.

Tellingly, Nolan’s mastery of image, symbolism and form permits him to portray a Kelly-Minotaur that, kangaroo-like, also resembles Anubis, the jackal-headed Egyptian god, known as the Guardian of the Scales. Thus, as we gaze upon him incomprehensibly, unable to define him, we are being judged. I long to escape this image. Yet as I turn away, I see the parody-grandmother of my nightmares again, assuming the form of Hecuba, the Trojan Queen, who, given to Odysseus as a slave, snarled and cursed at him, moving the gods sufficiently to turned her into a dog, allowing her to escape. Her ferocity in the face of her grief and loss is her, and our, salvation. Finally, I can embrace my nightmare for what it is: An inherited disposition for a mythology of anguish, not yet sated.

Many of Nolan’s Hydran landscapes on display seem at first glance innocuous and stereotypical, with their whitewashed houses juxtaposed against the blue. The viewer may well form the view that Nolan’s foray into the Greek world constitutes merely a conglomeration of superficial motifs acquired while on a western-colonialist holiday to a country just emerging from a brutal Civil War. They would be wrong to do so. Rather than being idyllic, these landscapes have a claustrophobic, surreal, unnervingly paranoid quality to them, deftly addressing the social and political fault lines underlying the utopian pleasuregrounds of the western tourist. Displaying these next to the more obvious depictions of aggressive mythological figures, while disconcerting, constitutes a true icon of the multifaceted and dissonant nature of modern civilisation, its fundamental myths and delusions included.
Nolan’s Greek series assisted Nolan in contextualising the mythological baggage acquired via his reading of Homer’s Iliad and Robert Graves’ seminal The Greek Myths with one of Australia’s own founding myths, that of the Gallipoli campaign. Coming to view the Gallipoli campaign as an epic Homeric struggle, the Greek series therefore constitutes a notebook, or a prelude to his seminal and subsequent Gallipoli series. As such, Nolan’s Greek series, comprising 61 works on loan from the estate of Lady Nolan, which have never before been exhibited in Australia as a single body of work, provides a powerful insight into the intellectual and symbolic world of a truly great artist, whilst also suggesting, to a Greek Australian audience, the manner in which motifs, symbols and myths can be employed to create a particularly unique and authentic Greek Australian mode of artistic expression. As such, it is an exhibition not to be missed.

For exhibition details go to hellenic.org.au/sidney-nolan-the-greek-series