Rd 4 will bring the four teams without a win head to head. 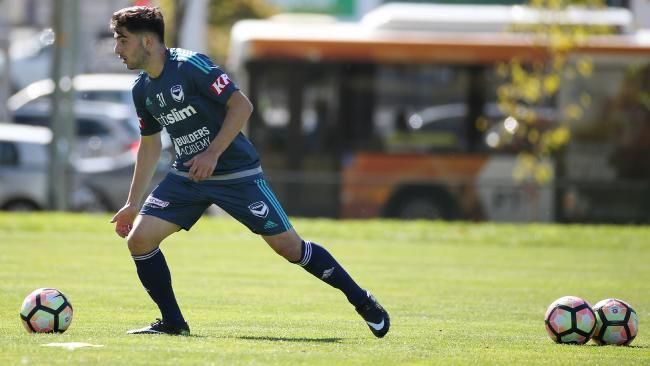 Melbourne Victory youngster Christian Theoharous has been named in the Victory squad to take on the Mariners this week. Photo: George Salpigtidis

Melbourne Victory heads the list of four teams yet to salute the winner’s post in the first three rounds this season. Two of the Rd 4 matches will bring the four of the bottom team with a win against each other, so there’s a good chance one of these teams, if not two, will win their first game of the campaign.

Wellington Phoenix v Brisbane Roar, Westpac Stadium, Wellington, Sat 28 October, 7.35 pm
The pressure is on bottom of the table Roar to win in Wellington after three straight losses this season. Striker Maccarone continues to provide a threat to opposition defences, and they were slightly unlucky to come out of last week’s match against the Jets without a point. They’ll be without key full back Corey Brown who is out with a hamstring. Phoenix welcomes back skipper Andrew Durante and Gui Finkler from injury. The team was unlucky to lose last week to Melbourne City.

Adelaide United v Melbourne City, Coopers Stadium, Sat 28 October, 7.20 pm
Both these teams go into this fixture undefeated, however the Reds have been hit by a few injuries with goal scoring midfielder Lia out, winger Johan Absalonsen, and Ersan Gulum, a downside of their successful mid-week FFA Cup semi-final win against Western Sydney Wanderers. A few former Reds will be in the visiting City squad including Eugene Galekovic, Bruce Kamau, Osmama Malik, Iacopo La Rocce, and Ruon Tongyik.

Newcastle Jets v Western Sydney Wanderers, McDonald Jones stadium, Sun 29 October, 5.00 pm
The Jets suffered a significant blow to their finals’ aspirations when they lost marquee midfielder Ronald Vargas to a broken ankle sustained in a tackle with Matt Mackay last week. The Jets however have forwards Roy O’Donovan and Andrew Nabbout in fine form and will be looking to overturn a recent poor run of results against a visiting Wanderers’ team.

Central Coast Mariners v Melbourne Victory, Central Coast Stadium, Sun 29 October, 7.00 pm
The big out in this game is Victory spearhead Beshart Berisha suspended for two matches for touching an official. Pierce Waring and Christian Theoharous come into the squad and may be deployed in attack at some stage by coach Muscat. However without Berisha in attack, the Mariners will feel confident about scoring a first win of the season.
Meanwhile, the Mariners will welcome back key player Andrew Hoole from suspension.