The day the Germans marched on Lemnos

To mark the 76th anniversary of the beginning of the terrible occupation of Greece by the Axis invaders in 1941, historian Jim Claven shares the story of one island's experience of occupation - the northern Aegean island of Lemnos

Learning how the occupation affected Lemnos, has truly been a journey for me, and one that began as I sat in the front room of Judith Gunnarson’s Caulfield home. Judith is the daughter of a nurse who had served on Lemnos in WWI. We sat and listened to the account of Angelo Kalomiris from Kontias, who, as a young boy, had witnessed the day the Germans marched on Lemnos. Later we heard the recollections of Chris Mingos from Kontias, Nikolaos and his daughters Liza and Haroula Koutsaplis from Tsimandria, and Dimitris Boulotis.

The war came to Lemnos with the arrival of landing craft carrying a small British force onto the island on 4 April. It must have been a cold April on Lemnos as one of their number, John Riggs, remembers wearing a locally made sheepskin coat. But soon he was watching German aircraft overhead as the invasion of Greece unfolded. When Thessaloniki fell on 9 April, the British force withdrew on 12 April.

Photos in the archives show the first German troops making their way across the hills and through the villages that dot the beautiful island on 24 April.

Remembering Lemnos’ role in 1915, the Germans feared that the Allies would use Lemnos as a strong point. The invasion force sailed to Lemnos from Thessaloniki, landing at Pournia Bay – where the Anzacs had sailed from in 1915 – and made their way to the capital Myrina. The initial German occupying forces were soldiers of the 382nd Infantry Regiment, commanded by Oberst Helmuth Beukemann. The original troops planned for Lemmos’ invasion,
German paratroops, were diverted to seize the Corinth Canal.

There was resistance. Brisbane’s Sunday Mail reported on 27 April that the local Greek garrison, supported by the police, fought the invaders. The garrison – commanded by Lemnos’ Hellenic Navy commander – dispersed after withdrawing to the Cape Agia Irini. Angelo and Nikolaos, both then young boys, remember that a local policeman shot at the Germans as they landed and then escaped in civilian clothes. Nikolaos remembers how the policeman was hidden in the village of Tsimandria and when the villagers refused to give him up, the Germans took all the Greek Army veterans they could find to ship them to camps in Germany. Only the intervention of Elena – the wife of the famous Greek leader Venizelos – stopped their transportation and they were returned to Lemnos. Dimitris Boulotis, the former deputy mayor of Lemnos, told me of how his father – a soldier at the time – decided, along with his comrades, to go underground, hiding their weapons and blending into the civilian community. They would live to fight another day.

By Anzac Day 1941 the Germans were in control of Lemnos, and soon had occupied the rest of the northern and central Aegean. Just as Lemnos’ great bay of Moudros had been a major naval base during the Gallipoli campaign in 1915, now it became the base for German ships patrolling the northern Aegean.
Photographs show the Germans marching through the capital, even sunning themselves while enjoying a drink in a café, another shows Germans using abandoned British vehicles. The Germans even erected a war memorial on Lemnos in June 1941, to the east of Myrina, where they conducted their own commemorative services throughout the occupation.

The Germans made their presence felt across Lemnos. With their headquarters at Myrina, they spread out to occupy the main towns and villages of the island. Nikolaos remembers that some of the German infantry were based at the village of Leivadochori. A light artillery battery was located on the hill near Tsimandria’s village cemetery, while a large heavy artillery base was established outside the village at a location referred to then, and to this day, as ‘Cannonia. From here they would fire across the bay towards the small satellite island of Aghios Efstratios, evacuating a number of the homes in Kontias for the safety of the locals. This is also probably one of the reasons that the small population of the island is reported to have been removed by September 1944.

The arrival of the Germans had a direct impact on the locals. Angelo remembers the first Germans arriving on motorbikes in the village of Kontias. They demanded billets in the villages, occupying the homes of those Lemnians who were not present on the island, such as those in Alexandria. Villagers were requested to provide furnishings for their new German neighbours and were required to undertake forced labour on a rotation basis. Chris Mingos remembers his father being whipped by a German officer while he laboured for them at nearby Diapori Bay. Angelo’s father Stavros – who had at one time been a waiter in Smyrna – was conscripted to cook for the Germans billeted in Kontias. The local German commander – known as ‘Bill’ – allowed him to take the surplud food he had prepared for them, including soup, marmalade, bread, and coffee. In his work, Stavros would boil up a large cartload of coffee and take it to the troops located around the village. The remainder – often as much as 10 litres – he would distribute among the locals.

The local German commander loved his wine, and in return for some wine from the vineyard of Stavros’ uncle Aristides, the German supplied more food for the locals, even turning a blind eye when Stavros used the German food stores to help feed his family, friends, and other locals. In the phrase of the time, Stavros’ house was so full of plenty that it was named ‘America’. After the war, villagers recounted to Liza Koutsaplis how her grandfather saved them from starvation by giving them flour and oil that he successfully hid from the Germans. Acts of kindness by individual German troops were not unknown: Nikolaos remembers a soldier who brought gifts at Christmas for the children of a poor relative who had recently lost her husband to illness.

As the occupation dragged on and German food supplies to the island’s troops were disrupted, the Germans extracted more food from the population. Angelo remembers how local troops took food from his family by taking him to Cannonia to work as punishment for using a banned kerosene lamp in the evening. His family had to provide a dozen eggs to secure his release.

While those in rural areas were able to produce some of their own essentials, these new exactions nevertheless made life more difficult for the local population. Angelo remembers that although no-one starved to death on Lemnos – as many did in Athens and other parts of Greece – he saw many villagers go hungry and become ill due to lack of proper nutrition.

Despite a level of initial cooperation, German repression took its toll on Lemnos as it did across Greece. Along with forced labour and food confiscations, people were arrested and some killed. Those locals of the Jewish faith – mostly former Asia Minor refugees – who could not hide, were removed and murdered during the Holocaust.

The long years of occupation saw the growth of resistance on Lemnos and across Greece, the resistance was formed around the EAM organisation and its armed wing, ELAS, the local leader on Lemnos was Andreas Noulas.

One report states that 20 Lemians were executed by Germans during the occupation. A memorial stands to the north of Myrina listing the names of those executed by the Germans throughout the occupation, and this contains the names of four Lemnians as well as those andartes from other parts of Greece, including Lesvos, Thessaloniki, and far off Zakynthos.

Nikolaos remembers talk of how many of the Germans garrisoning Lemnos cried when they received their orders to move to the Russian Front, and indeed a number of soldiers defected to the resistance on the island.

By 1944, a number of the German troops on Lemnos were from the 999th Rehabilitation Battalion, which included many socialists and communists who had been jailed for their opposition to Hitler and we know that a number of these joined the resistance on Lemnos, including Wolfgang Abendroth, who later wrote of his time on the island. An amazing photograph has survived showing these armed German soldiers having deserted to the resistance with their new andarte comrades.

Soon the long-awaited liberation of Lemnos would commence – but that is another story.. 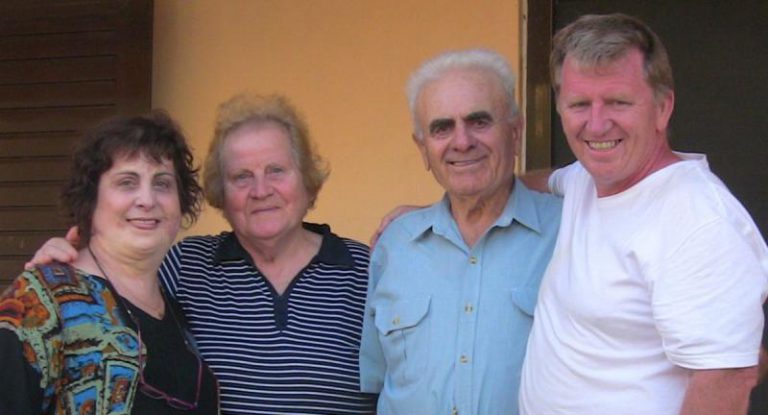 * Jim Claven is a historian, freelance writer and the secretary of the Lemnos Gallipoli Commemorative Committee. He acknowledges the work of Lemnos historian Aristides Tsotroudis on the German occupation and thanks Angelo, Chris, Nikolaos, Liza, Haroula and Dimitris for sharing their memories. Anyone with more stories of the occupation and liberation of Lemnos should contact Jim at jimclaven@yahoo.com.au.