Australian Under-17 captain and Sydney FC defender Angelique Hristodoulou is a star on the rise with the help of her father, former Olyroo Eric Hristodoulou 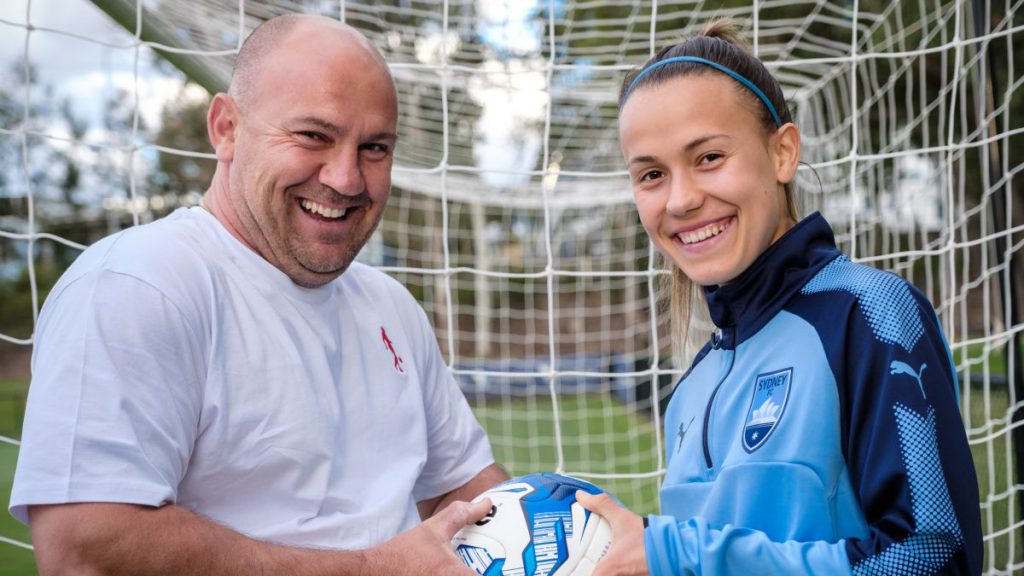 To say 11 December 2016 was a memorable occasion for Angelique Hristodoulou would be an understatement. Round six of the 2016-17 W-League season marks the day the then 15-year-old made her debut for the Western Sydney Wanderers’ senior team.

It was a symbolic occasion in more ways than one. The match was away to Melbourne Victory and the Sydney-born youngster felt excited as she entered Lakeside Stadium the home of South Melbourne where her father played on many occasions.

Moments into the game, Angelique saw her dream accomplishment begin to take a drastic turn.

“It was definitely a debut to remember as I didn’t get off to the best start,” she tells Neos Kosmos.

“I scored an own goal in the first couple of minutes and then I got a yellow card. But I kept going the whole game. I didn’t let it disappoint me. I didn’t let it drop my head.
“I took it onboard as a learning curve and went onwards from there. We ended up drawing 2-2, we actually missed a penalty, so it was a game we could’ve won.”

The action-packed debut didn’t faze the resilient teenager and Angelique went from strength to strength and on to play for Western Sydney Wanderers W-League side for the majority of the season.

Two months ago, the now 16-year-old captained her country against Japan and North Korea in the Asian Qualifiers for the Under-17 World Cup.

Angelique is achieving all these accomplishments while still attending high school.

But it’s no ordinary school. Hristodoulou attends the prestigious Westfield Sports High which is more akin to a ‘football factory’ as over the years it has produced over 11 Matildas, 20 W-League players, 3O A-League players, and six Socceroos.

Angelique is also a member of the New South Wales Institute of Sports (NSWIS) Under-17 program where she is coached by former Socceroo Craig Foster.

For anyone, especially one so young, these commitments are impressive. When Angelique does have time to reflect, even she is surprised at the rate of her development.

“I do pinch myself sometimes that I’m still only 16,” she says.

“It is quite a big deal to be playing against women and Matildas. But it’s not only me, there have been quite a few girls that have been in the same position that have come through at Westfields and played in the W-League. There is also Princess Ibini-Isei (Sydney FC), Jada Whyman (Western Sydney Wanderers) and Elli Carpenter (Canberra United). But it’s a sports high school so a lot of kids are making their debut at young ages and progressing a lot.”

The Australian Under-17 squad that Angelique captained almost made it to the World Cup, and she found the experience exhilarating.

“There is no better feeling, to be honest,” she says. “Leading the girls out and wearing the armband. I feel very honoured and privileged to have experienced that – to have represented my country at the highest level for my age.”

In the 1990s Angelique’s father Eric Hristodoulou featured in the former National Soccer League (NSL) for Sydney Olympic where he played alongside Socceroo legends Ned Zelic and Brett Emerton.

So, it’s no surprise that the former Australian youth international is happy to see his daughter follow in his footsteps and play the game.

“She’s achieved so much in such a short time. She’s got a few people to thank like her coaches, Leah Blayney at Westfields, Dianne Alagich at Sutherland Sharks and Craig Foster at NSWIS who have all shown a lot of belief in her and helped her.
“I know there are a lot of parents who try to live their childhood through their kids, and I am fortunate to have experienced a lot myself. I keep telling her, ‘if you want to play you have to listen to your coaches. You must respect them and try and learn as much as you possibly can from all of them’.”

For some, being an athlete following in their parent’s footsteps can be a hinderance, but Angelique says it’s the opposite.

“It’s a help 100 per cent,” she says. “He knows so much about the game. When you have someone who has the experience that he has, I know that everything he says to me is helpful. When he talks to me I listen, and I take it on board. I know it’s for me to get better.”

This season Angelique moved to Sydney FC, who feature Matildas such as Lisa De Vanna and Chloe Logarzo, which means regular football may be hard to come by, however the teenager is relishing her new environment.

“Sydney FC are a very reputable club and have a lot of big players which if I constantly train with, then I know I’d improve my game and develop,” she says.

“That’s the most important thing, training week in and week out with these players. If I want to improve my game and take it to the next level, then that’s where I have to be – training and playing with the best.”

Angelique’s coach at Sydney FC is former Socceroo Ante Juric and he says the defender has the potential to make great strides in the game.

“She’s a fantastic young talent coming through,” he says. “Ange is a tenacious winner – I like that. She has more to learn as she is only young. She is a professional even at this young age, she’s composed on the ball, disciplined and knows the game.”

Juric and Eric Christodoulou are former teammates after spending a season together at Sydney Olympic and the Sydney FC coach admits the daughter could be better than the father.

“In context Eric was a great player and let’s just say Ange will be better,” he says laughing.

“Playing in the W-league at this age will improve her. How far can she go? Well it’s up to her really. She can be a Matilda. It’s a matter of hard work and understanding what she has to do. She has got that mentality, so I would say she can go as far as she possibly can and wants to.”

While Angelique is happy to reach for the stars, in the short term she is focused on securing game time in the W-League this season.

“It’s my goal to hopefully make the Matildas,” she says. “I know I am young, but hopefully in three or four years’ time I can get called into a camp or a squad where I can prove myself and hopefully train with them.
“Right now, I am hoping to be in the starting line up for a couple of games with Sydney FC then play well and secure my spot. Yes, we have a lot of Matildas with a lot of quality and more depth in the squad. At Wanderers it was a bit different.
“So, selection for Ante would be very hard because of the depth. I know that I am in a good team with great players, so I must work hard for that spot and I’m up for the challenge.”