Devastating flash floods in Athens leave 16 dead and many homeless

One of the worst natural disasters to hit the capital in decades, Greece declares national day of mourning A car at the entrance of a flooded house after the water receded in the town of Mandra west of Athens on Thursday. Photo: AAP via AP Photo/Petros Giannakouris

Flags across Greece were flown at half mast on Thursday after at least 16 people were killed and more than 20 injured following flash floods that hit two coastal towns west of Athens on Wednesday.

The industrial towns of Nea Peramos and Mandra saw raging torrents of mud and debris following a severe overnight storm, with some residents seen climbing balconies and rooftops to escape the rising floodwater.

Cars were upended and thrust into buildings after being swept through the streets, and floodwater carrying debris charged toward the coast sinking fishing boats in a small harbour.

According to authorities, some 500 homes and businesses have been damaged with walls collapsing, leaving many homeless.

“As you can see, everything is a mess,” said local resident Katerina Sideri.

Hit hardest by the flooding was Mandra on the outskirts of the Greek capital, around which 12 of those killed were found, including four women and eight men.

The natural disaster is one of the worst to hit Athens in decades, with the country declaring a national day of mourning.

The fire department alone received 660 calls, deploying 190 firefighters and 55 vehicles, and went on to rescue 88 people trapped in cars and homes.

“Everything is lost. The disaster is biblical,” Mayor of Mandra, Yianna Krikouki told state broadcaster ERT.

Prime Minister Alexis Tsipras made a televised statement in which he said immediate support measures would be adopted for households and businesses affected.

“This is a very difficult moment for our country. We mourn the deaths of 14 people in what is a great disaster,” he said. “It is the wish of all of us that this number does not increase.” 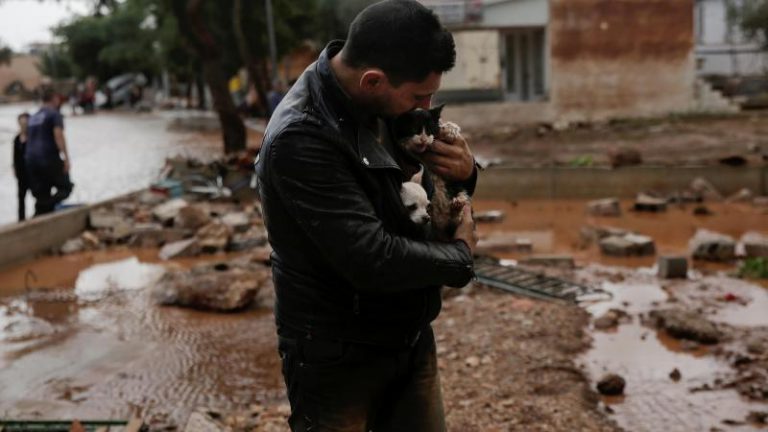 Local municipalities stepped up to accommodate those left homeless with hotel rooms and the Merchant Marine Ministry was making arrangements for a cruise ship to dock near the area for temporary accommodation, with plans for the army and navy to supply water tankers to supply locals with clean water.

Meanwhile four people still remained missing on Thursday night, with rescue teams searching through homes in the area for people who may be trapped and along the flooded highway.

An immediate investigation into the disaster has been ordered by judicial authorities, with investigators looking into factors that may have contributed to the severity of the flooding, such as illegal construction.