Same Sex Marriage: Let’s bury the hatchet and move on

An open letter to a ‘No’ voter 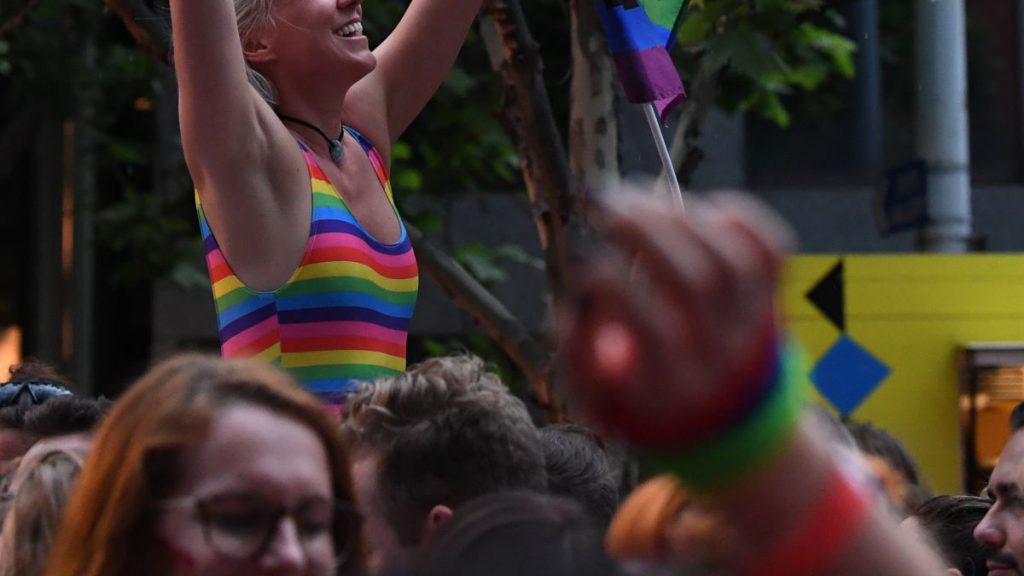 Supporters of the ‘YES’ vote are seen celebrating during a street party outside the Victorian Trades Hall building in Melbourne following the result of the marriage equality survey on Wednesday. Photo: AAP/James Ross

I hope you’re well. I really do. I know these past few weeks have been very challenging and I can imagine that you’re disappointed by the outcome of the postal vote on Same Sex Marriage. It’s never pleasant to lose, particularly when you have fought as hard as you have during this campaign.

But this is the nature of politics. And this is the greatness of democracy: the people voted, the majority has decided and now we all have to accept the outcome, and conform with the wishes of the people.

Regardless of how the campaign period went, in the end, democracy did its job – and it did it perfectly. Voting went smoothly, everything was done as it should and nobody questions the outcome. So, let’s celebrate the fact that we can all have a democratic process to sort out divisive issues and stop being divided. Let’s leave the campaigns behind, bury the hatchet and move on.

I know, this is easier said than done. There’s still a lot of bitterness in public discourse.

Toxic rhetoric has left its residue – and it may take time to get back to normal. It’s true that a lot of harsh things have been said, from both parties, a lot of accusations, a lot of hateful speech. Hate is a very grave word; I know that you’re not a hateful person, you don’t ‘hate’ homosexuals.

But when we engage in public debate, and particularly in one as polarising and divisive as this one, it is easy to get carried away and say things that might hurt others. I know you didn’t mean to hurt anyone, that you’re not mean and hateful; you’re just concerned, genuinely concerned about our society and our values.

I get that; I respect that. I don’t necessarily agree, but I understand where your objection comes from. A part of me admires you for your strong beliefs, for your dedication to tradition, for your ability to maintain your religious faith. I can assure you that nobody’s trying to take this away from you. No matter what priests and conservative politicians say, your personal faith has never been the issue in this debate.

In secular countries like Australia the church has been trying to keep a very fine balance so as not to meddle in politics; most of the time, this works well. This time around, church leaders could have done much better, trying to bring people together, instead of campaigning.

But you can’t expect the church to embrace change, do you? It was expected that they would not be open to changing the legal definition of marriage.

I understand how you feel the same. The world is changing, society is changing and you don’t feel that it’s going in the right direction. Well, to be honest, neither do I. Nobody can tell with certainty that they know where the world is heading to. Whatever we do, the future will always be unknown. Faced with this uncertainty, it is only natural that people look to traditional values for reassurance.

Compared with the future, the past is a very safe place. Of course, the past also had laws against homosexuality, gay people were being imprisoned and vilified and had their lives destroyed up until recently. I know you don’t want us to return to this time.

But when you speak about a ‘gay agenda’, you’re talking about the effort to correct these wrongs, to stop vilifying and discriminating; to not have ‘second class’ citizens.

But we can’t escape change – it is as ancient as the world. Do you think it’s a coincidence that one of the most ancient Chinese texts is called The Book of Changes? Look no further than the Greek tradition; 2,500 years ago, the ancient philosopher Heraclitus summed it up perfectly in his aphorism: “Everything flows”.

Change is inevitable. In fact, our so-called traditional values were the product of change, even if we don’t see it like that today.

People moved on, from nomadic living to building communities, from the feudal states to modern democracies, things progress, groups of people who were once marginalised, have fought for their rights to be included – from women to the LGBTIQ community, to migrants, to indigenous people, to people with disability, everybody who was once under attack, now have a fair go. And we still have a long way to go. Things have changed; and they will keep on changing, that’s the only certainty. Which way will they go? Nobody knows. Am I scared? A bit, yes. Nobody likes uncertainty.

But there’s no point in worrying about things that have already happened, for things that you cannot change. So stop worrying for a while. If it’s any consolation, we’re all concerned about the future. And when it comes, we will face it together – that’s another certainty.

So, stop worrying for a while. Let’s put our energy in healing the scars left by this toxic, divisive process. At the end of the day, we’re still part of the same society.

Which means that, worse comes to worse, we have no choice but to look after each other. So take your time – as much as you need. Whatever happens, we’ve got your back. This is what an inclusive society does.