The initiatives total nearly $180,000 in funding 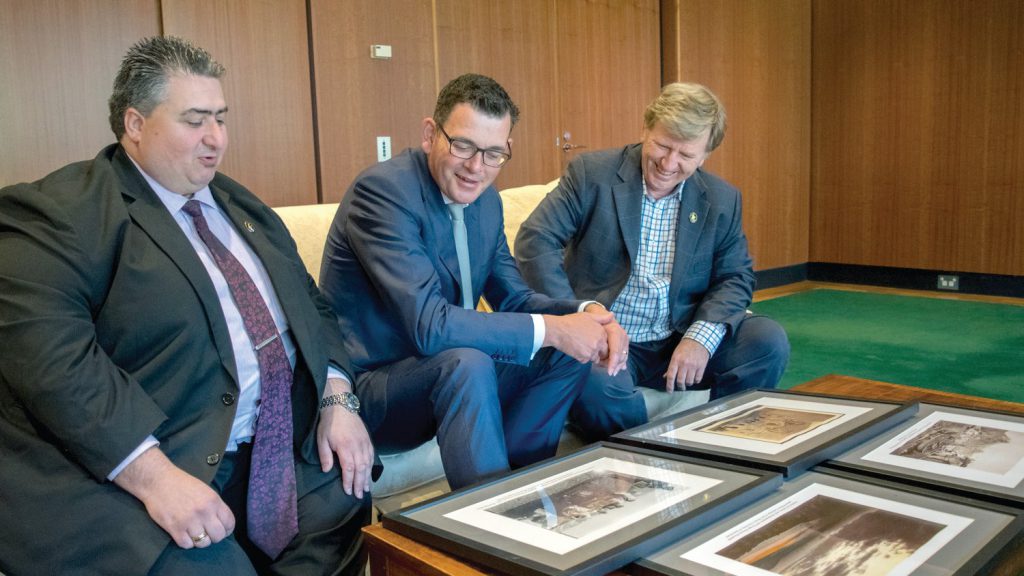 The Hon Daniel Andrews, Premier of Victoria, viewing some of Anzac photos of lemnos from 1915, with Lee Tarlamis and Jim Claven of the Lemnos Gallipoli Commemorative Committee.

The Premier of Victoria, the Hon Daniel Andrews MP, has announced a suite of new initiatives to enhance the commemoration of Lemnos’ link to Australia’s Gallipoli story.

The initiatives total nearly $180,000 in funding. This announcement was made during his recent visit to Greece. The initiatives also include a special delegation of Premier’s Spirit of Anzac Prize alumni who will travel to Lemnos – and to the Western Front – in 2018.

The special tour to mark the anniversary will see 10 participants from the first 10 years of the Premier’s Spirit of Anzac Program travel to Greece to witness the commemoration of the centenary of the signing of the Armistice of Mudros on the 30th October 1918, ending hostilities in the region 100 years ago. The Andrews Labor Government will provide $150,000 towards the tour.
The Government will also provide $5,000 to Mudros High School in Lemnos to further strengthen the ties between Victorian and Lemnos school students developed over previous Premier’s Spirit of Anzac Prize Tours.

The Government will also contribute $2,000 to Melbourne’s Lemnos Gallipoli Commemorative Committee to support its work in formally recognising the significance of the ‘Australian Pier’ on the shores of Mudros Bay in Lemnos. This grant will support our efforts for a permanent memorial marker on Lemnos restoring the name of this pier built by Australian soldiers in March 1915 – and still in use today.
And finally, the Government will also provide an additional $20,000 in support to the forthcoming Lemnos Gallipoli commemorative publication under production by the Lemnos Gallipoli Commemorative Committee.

This is in addition to an initial Victorian Government grant of $10,000 in support of the publication. As has been reported previously in Neos Kosmos, this publication will feature the reproduction of hundreds of original photographs of Lemnos taken by the Anzacs in 1915. It will tell the stories of the 148 diggers buried in Lemnos’ two commonwealth war cemeteries and the Australian nurses who served there – many of them from Victoria.

Premier Daniel Andrews said that he was proud to pay homage to Lemnos’ special place in Australia’s wartime story. He went to explain that these initiatives would further ensure awareness and links amongst young Australians and their counterparts on Lemnos.
“The special delegation to mark 100 years since the Mudros Armistice and the end of the war in November 1918 is a wonderful opportunity for our best and brightest Spirit of Anzac Prize alumni to return to Greece and reflect on the Australians who gave their lives at war.

It’s so important for our kids to learn about this time in our history and the sacrifices our veterans made – by supporting schools and organisations connected to Lemnos we’re ensuring they can,” the Premier said.
Mr. Lee Tarlamis, President of the Lemnos Gallipoli Commemorative Committee, welcomed these announcements.
“These initiatives will enhance the various efforts made over recent years by our Committee, the Victorian Government and the authorities on Lemnos to build awareness of Lemnos’ link to Anzac. We are thrilled with the Government’s decision.”

Mr. Tarlamis went on to say these initiatives would be welcomed on Lemnos.
“Having worked closely with the authorities on Lemnos over a number of years and witnessed their actions to ensure Lemnos’ role is commemorated on the Island, I know that these various initiatives will complement and build on their previous work and take it to the next level.”
Mr. Tarlamis was particularly keen to commence work on the erection of the new memorial commemorating the Australian Pier at Mudros on Lemnos.

“It was only recently that our Secretary and Historian, Mr. Jim Claven, was able to reveal the story of the Australian Pier. Built by Australian soldiers in March 1915 as they assisted in the landing of Australian medical services onto Lemnos, the pier was known locally and to the Allied forces as the ‘Australian Pier’ as indicated by Allied maps. It remains in use to this day and the restoration of this name will be another physical reminder of Lemnos’ link to Anzac. We hope that it will be included in the annual commemorative services conducted on Lemnos.”

He added that the Government’s additional support for the forthcoming Lemnos and Gallipoli commemorative publication will enable further copies of the publication to be produced and its release will support the commemoration of the Armistice of Mudros in 2018. He also welcomed the initiatives to enhance connections between the young people of Lemnos and Victoria.
“Our Committee was the first to promote the inclusion of Lemnos in the Victorian Anzac Students Prize Tour. Our Secretary assisted in the design of the program and has made presentations to the departing students on the role of Lemnos and what they will see.”

Ms Christina Despoteris, Vice-President of the Lemnos Gallipoli Commemorative Committee, who has worked in recent years to link schools in Greece and Victoria, also welcomed the educational initiatives in the announcements.
“The encouragement of further links between Victorian and Lemnian school children, supported by the grant announced, will build on work undertaken by both the Victorian Government and our Committee over recent years. Just as Victoria’s Students have journeyed to Lemnos to learn more about the link to Anzac, so the students of Lemnos have met with them and taken part in the annual Anzac services on Lemnos. ”

She added that the Committee intends to support the Government’s grant with the supply of additional educational supplies, including a number of important Australian historical reference books telling the story of Lemnos’ link to Anzac and Gallipoli generally.
Mr. Tarlamis pointed out that these initiatives will play an important role in raising awareness of Lemnos and its link to Anzac especially as we enter the coming centenary of the ending of the war in the Middle East with the signing of the Armistice of Mudros on the 30th October 1918 in Lemnos’ Mudros Bay.

“It was here that the Armistice was negotiated between the Entente Powers (which included Australia) and the Ottoman Empire. The signing of the Armistice ended the First World War across the various battle fronts – from Salonika to Syria. Whether as soldiers, sailors, airmen, nurses or prisoners – for thousands of Australian soldiers the war was finally at an end. This day should not be forgotten,” he said.
The Lemnos Gallipoli Commemorative Committee has already set in place a number of important commemorative events for next year.
March will see the donation to the Victorian Returned Service League of a beautifully framed, large high resolution print of the original photograph taken on Lemnos in August 1915 of the arrival of the Australian nurses on the Island.

This will be hung in the RSL Headquarters in Collins Street, a permanent reminder and legacy of the role of Australia’s nurses on Lemnos, Greece during the Gallipoli campaign.
August will see a major new display of photographs taken by Australian soldiers and nurses on Lemnos in 1915. These will be displayed at a special exhibition in the Queen’s Hall of the Victorian Parliament. The exhibition will include a commemorative booklet as well as a launch of the exhibition to be held in the Parliament’s Federation Room. The week will culminate with the Committee’s annual commemorative service at the Lemnos Gallipoli Memorial in Albert Park, at the newly named Lemnos Square. These events are open to the public and all are welcome.
The Committee is planning to hold the first ever commemoration of the Armistice of Mudros. This will take place in Melbourne, with the venue to be confirmed. This will be a public event and all will be welcome.

The Committee will also be working with the authorities on Lemnos to take part in the annual Anzac services to be held on Lemnos on the 20th-21st April, as well as the proposed commemoration of the Armistice of Mudros at Lemnos in late October or early November 2018. It is hoped that members of our Committee will take part in both these commemorations on Lemnos.
Mr Tarlamis said that the Committee would now work with the Victorian Government and authorities on Lemnos to implement these initiatives. He added that these developments are the culmination of the years of dedicated work by members of the Committee and he thanked Neos Kosmos for its on-going support in promoting awareness of Lemnos’ Australian Pier as well as the Hellenic link to Anzac.

*Jim Claven is a trained historian and freelance writer. He has researched the Hellenic link to Anzac across both world wars for many years, leading commemorative tours and undertaking a number of legacy projects in Australia and Greece, including the Lemnos Gallipoli Memorial in Albert Park. Jim’s story revealing Lemnos’ Australian Pier was published in Neos Kosmos on the 5th August 2017. He can be contacted via email – jimclaven@yahoo.com.au.