The Greek Orthodox Community of Australia once again celebrated the baptism of Jesus Christ by John the Baptist, with events held in all the major Australian cities.

In Melbourne thousands of faithful attended the liturgies and even more people lined up to either dive into the waters to retrieve the cross or enjoy the annual tradition with the main points being Port Melbourne, Frankston, Rye and Geelong. Hundreds of members of the parish gathered in Red Hill’s Panagia Kamariani on Saturday and later on walked up to Rye beach where Father Eleftherios Tatsis threw the cross in the water. This year for the first time a girl was the lucky swimmer who got to it first, 16-year-old Emily Paxevanou. Emily’s first attempt was back in 2015, when she made history by becoming the first female to dive for the cross in Australia.

“In my 51 years of priesthood, this is the first time I’ve seen a girl catch the cross,” Father Lefteris said. 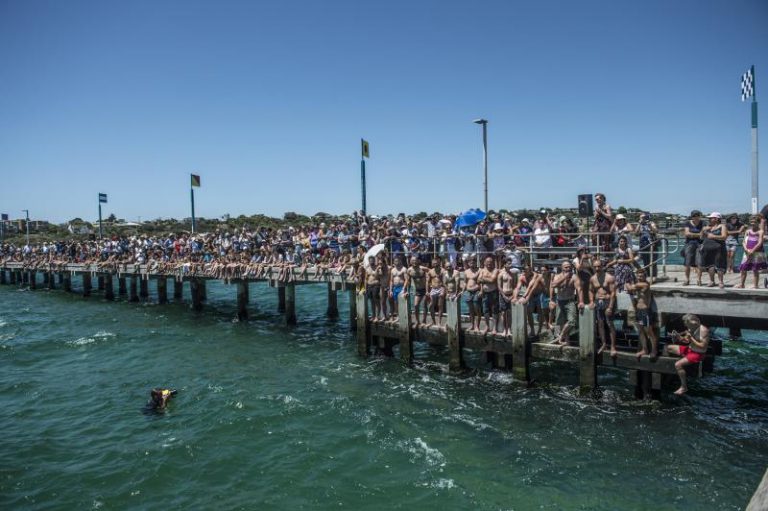 In Geelong, the blessing of the waters took place in St. Helen’s Pier and 19-year-old Spiros Alesios was the one to catch the cross.

Even more people attended the liturgy and blessing of the waters on Sunday in Port Melbourne. Thousands of members of the Greek Orthodox Community of Melbourne and Greek state officials attended the ceremony celebrated by Bishop Ezekiel of Dervis and Bishop Iakovos of Miletoupolis together with all the Clergy of Melbourne.

The Bishop of the Romanian Church Michael and the assistant of US Archbishop Dimitrios, Bishop Sebastian were also present, alongside Federal Member of Chisholm Julia Banks representing Prime Minister Malcolm Turnbull and Federal MP Michael Danby representing the leader of the opposition Bill Shorten. State Minister Jenny Mikakos passed on Premier Daniel Andrews’ regards, while State Opposition Leader Matthew Guy and members of the local council were there too, together with Victorian Multicultural Commissioner Helen Kapalos; the new Consul General of Greece in Melbourne Dimitris Michalopoulos, State Member for Albert Park Martin Foley, Labor MP Nick Staikos and last but not least the representatives of Delphi Bank and Bank of Sydney Vasilis Anevlavis and Theoharis Alaveras respectively.

The cross in Port Melbourne was retrieved by 18-year-old Alexandros Dobros from Lalor.