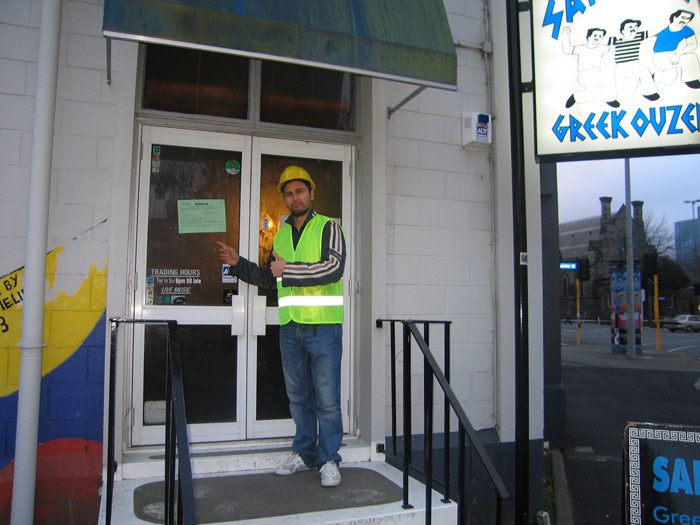 Church cantor for the Greek Orthodox Community in Christchurch, Peter Pavlides, has lost his home after it sank and collapsed following last week’s earthquake in New Zealand.

President of the Greek Orthodox Community in Christchurch, Panayiotis Halloumis, told Neos Kosmos the elderly Mr Pavlides and his wife, who live at the foot of the Cashmere hills, south of Christchurch, evacuated their house during the 7.1 magnitude quake, which was the most damaging to hit a New Zealand city since 1931.

“Their house sank on one side and then collapsed entirely; it didn’t happen in one go,” Mr Halloumis said, adding that the neighbour’s house also suffered the same fate. Mr Pavlides and his wife have been temporarily located to a new flat, Mr Halloumis said.

Mr Halloumis, said the Greek Orthodox Church, located in St Albans, north of Christchurch, did not suffer any structural damages from the September 4 disaster, but the glass in front of one of the church’s icons smashed during the quake.

Members of the Greek community within the area escaped the quake with minimal damage he said.

“We had some chimneys come down but everyone is fine”.
Owner of Santorini Greek Ouzeri Restaurant, in Christchurch’s central city, Theo Kerdemelidis, told Neos Kosmos his business was lucky to escape relatively unscathed.

“Some of the other restaurants have caved in entirely, we only had one glass break,” Mr Kerdemelidis said, adding that alcohol bottles in his restaurant survived the quake by landing on bar straws.

At least 100,000 of the 160,000 houses in the city and surrounding districts were damaged and more than 200 of 678 buildings in the central business district remain too badly wrecked for workers to re- enter them.

While Mr Kerdemelidis’ restaurant premises suffered no damage to its infrastructure, he said reservations for last Saturday night (September 4) dropped from 157 to zero following the quake earlier that morning.

“We’ve been given the green label from building inspectors, we re-opened on Tuesday but the city’s like a ghost town,” he said. “People are nervous about coming here now…at the moment we are reconfirming the bookings for this weekend coming up, as the numbers are also dropping with people still afraid of another major shake in the city”.

Mr Kerdemelidis, who lives in North Beach (Waimairi Beach), New Brighton, was at home sleeping when the quake struck at 4:35am.

“Being so close to the water, we were initially worried about a tsunami, so we went to my Aunty’s house further inland and waited there for a tsunami warning,” he said.

Aftershocks continue in the wake of the quake, Mr Kerdemelidis said.

“We just had another jolt 20 minutes ago, so the aftershocks are continuing…we’re getting tremors everyday and they’re quite strong, like half the strength of the earthquake,” he said.

While his own home was not damaged Mr Kerdemelidis said lots of chimneys had fallen from houses.

“There were lots of close calls, like people who got out of their houses and then a second later a wall came down in the place they would have been,” he said.