The Brazilian maestro was joined by Peter Zois on the podium as the South duo took out the Victorian Premier League’s most coveted individual awards. 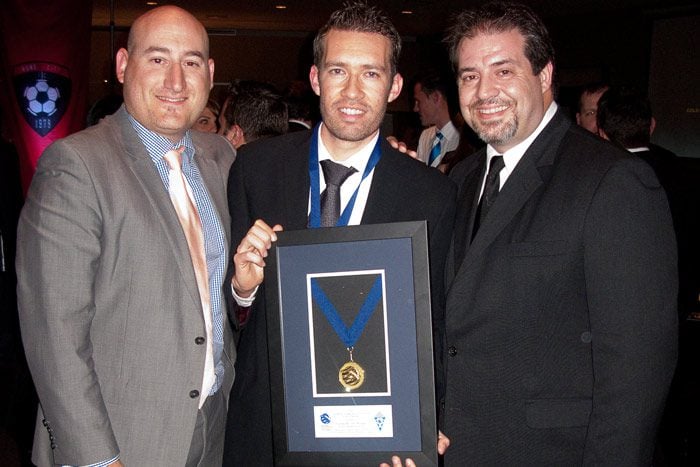 South Melbourne’s Fernando De Moraes capped off a superb individual season by winning a host of awards this week including the Victorian Premier League’s player of the season and South Melbourne’s own Best and Fairest award.

South goalkeeper Peter Zois was also on the award winners list, taking out the hotly contested award for the 2010 Victorian Premier League Goalkeeper of the Year.

Along with the VPL Gold Medal, De Moraes won the 2010 Theo Marmaras Medal, awarded to South Melbourne’s best and fairest player in Thursday night’s presentation. The midfielder completed a clean sweep of the club’s awards by also winning the 2010 Golden Boot award for South Melbourne.

In a glorious night at the Victory Room at Etihad Stadium, De Moraes was able to create South Melbourne FC history by becoming the Club’s first ever recipient of the gold medal.

Despite missing three VPL games due to injury in 2010, Fernando polled three votes in the final game against Sunshine George Cross to win the medal by a single vote over Heidelberg’s Yanni Galanos.

De Moraes’ season was made all the more exceptional with 13 league goals, which placed him in second position on the league’s Golden Boot tally behind Northcote City’s Trent Rixon.

What made this achievement even more remarkable was that his goals came from midfield and that he was also a key contributor in setting up many of South’s other goals.

De Moraes finished on 63 votes in the Marmaras Medal count, four ahead of vice captain Steven O’Dor and Peter Zois, who both finished equal second on 59 votes.

In his speech after accepting the awards, De Moraes spoke glowingly of the fact that South Melbourne FC was like a second family from him, and that all he wanted to do was play as many matches and score as many goals as possible for the team.

De Moraes said, “Football is a team game and it takes great team-mates to work hard to set you up for goal scoring opportunity…and I am lucky to play in a great team.“

He was rewarded with his first Goalkeeper of the Year award and now joins former South captain Dean Anastasiadis as the only South goalkeepers to have won this award, with Dean winning back-to-back awards in 2005 and 2006.