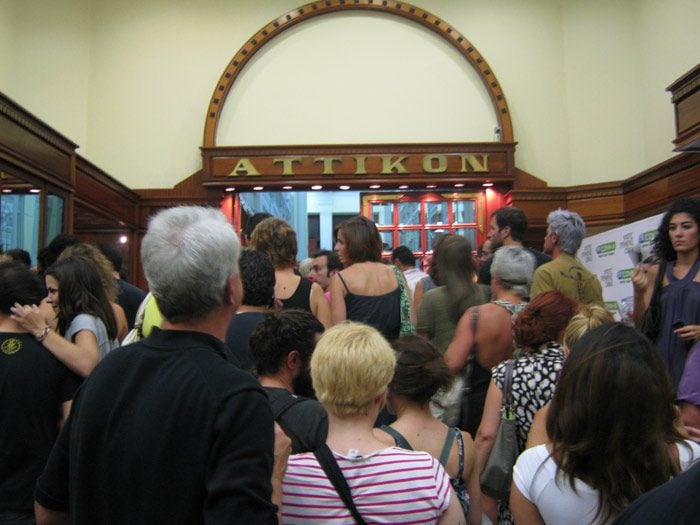 Crisis? What crisis? Judging from the lavish after-party on the opening night of this year’s Athens Film Festival, where the wine flowed and the canapes kept multiplying, the Greek cinema scene is alive and well!

I couldn’t get into some Greek sessions, no matter how hard I waved my press pass!

Appearances can be deceiving, but Greek filmmakers at the moment are productive and up-beat.

The festival which ran from September 15 to 26 attracted large crowds.

It is a popular festival with Athenians, because it unspools over the pleasant late summer period and screens audience-friendly films.

Greek films in particular were eagerly anticipated and well-attended.

I couldn’t get into some Greek sessions, no matter how hard I waved my press pass!

Apart from the six new Greek feature films the festival screened, there was also a screening of Melbourne’s very own Ana Kokkinos’ last feature, Blessed, which was released in Australia late last year.

It is being released in Greek cinemas next month and Kokkinos attended the festival to present her film and also do interviews for the upcoming release.

I am not a fan of Kokkinos’ work but I admire her intelligence. I had not seen Blessed, so this was a virgin screening for the audience and for me.

I was surprised by the film: it maintains her typical TV style, but otherwise is a powerful portrait of several different families, and the pain that lies within individual people.

Of the three Greek films I saw, Mesa sto Dasos (In the Woods) directed by Angelos Frantzis was the bravest and the best.

Firstly, it’s an unusual film in that it was shot with a small, cheap camera, in fact a camera designed for still photos, and so the camerawork is soft and hazy, but very intimate and tactile.

But the main interest of the film is its storyline and its form.

The film begins with the story’s ending: three friends are burnt to death in a blazing car.

And so the ‘what will happen?’ question is taken out of the film from the very start.

The rest of the film shows the three unusual characters interacting and in a very particular context: they have cut themselves off from the world, they live in the forest, in caves, and in abandoned houses.

They are outsiders, and doomed.

The film’s style is minimal: the characters barely speak.

It reminded me of the experimental films of American director Gus Van Sant, such as Gerry and Last Days.

Frantzis clearly stamps himself as a director not afraid to have an ‘audience-unfriendly’ style.

A more normal film, in all kinds of ways, was 45 Tetragonika (45 m2), directed by Stratos Tzitzis.

In fact, it was very refreshing to see ‘ordinary’ things on the screen: the known Athenian streets, the apartment blocks, the everyday people walking around.

A film ostensibly about the crisis, it follows the plucky Christina (Efi Logginou), in an amazingly natural performance, as she tries to break away from her clinging mother and live in her own apartment.

We see her look for furniture, nurture an abandoned cat, and, crucially, work and work and work, to try to make ends meet.

Her independence, emotionally as well as financially, is a fight.

A simple film, but one that makes some nice observations about life in this current tough economic climate in Greece.

The third Greek film I saw was Tungsten (directed by Giorgos Georgopoulos).

It’s another film reflecting on the crisis in its subject matter, but this time in a high-energy, profane style.

Despite its zip and zap and the presence of the great actor Vangelis Mourikis, it was a dead film, devoid of humanity and intelligence.

Now that some Greek films played in the Venice Film Festival recently, with actress Ariane Labed winning Best Actress for her performance in the film Attenberg, Greek cinema is looking up again.

In Melbourne, you will have a chance to see some recent Greek cinema in the upcoming Greek Film Festival, from October 13 – 31.