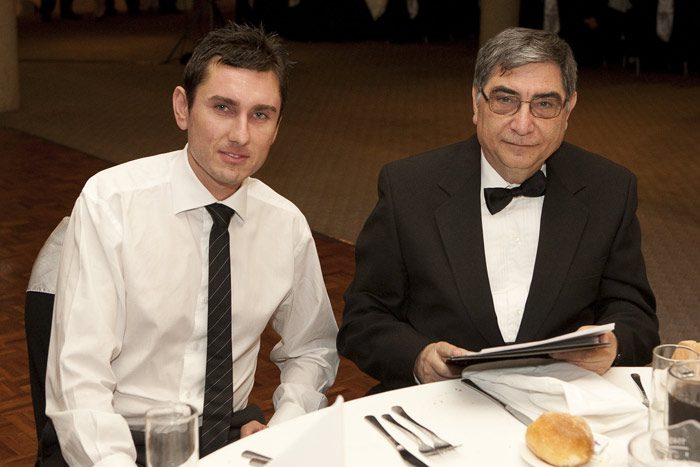 “One third of AMAC’s membership comprises of third generation Greek Australians,” he said.

He said AMAC is an advisory body which assists in the preservation of the truth in the face of the “falsification of history in the area of Macedonian identity”.

Professor John Melville-Jones from the University of Western Australia spoke about the “importance of preserving historical truth in light of attempts to distort Macedonian history.”

He relayed how he learned Ancient Greek and Latin as a young boy during WWII. After travelling to Greece in the 1960s he became a scholar of Byzantine history.
“What makes Greek culture different to others is its continuity throughout the ages,” Prof Melville-Jones said.

He said he felt “sorry” for those from the former Yugoslav Republic of Macedonia because”they are trying to create an identity from what does not exist – they don’t want to be Bulgarian, Albanian or Serbian,” he said.

Prof Melville-Jones said FYROM activists are “indoctrinated to believe” in the “myth” and that it was “too easy for myths to be accepted”.

Marcus Templar from Chicago has conducted extensive research into Macedonian history. He was critical of the “Greek power elites” for not taking a more aggressive stance against a concerted effort by FYROM to “userp Greek history”

Mr Templar criticised the lack of a real Hellenic lobby in the United States and the way various Non Government Organisations, like the Centre of Democracy and Reconciliation in South Eastern Europe, were acting as trojan horses for anti Hellenic campaigns.

He said the “prevailing opinion is that the Slavic population of FYROM feel humiliated by not having an identity” as a result of the internal conflict between Albanians and Serbs.
“It’s not a fault of the Greek people that the Slavic people of FYROM cannot adopt a name,” he said.

Among the 150 in attendance were Victorian Parliamentary Secretary for Planning: Jenny Mikakos, member for the federal seat of Higgins: Kelly O’Dwyer, and President of the Greek Orthodox Community of Melbourne and Victoria: Bill Papastergiadis.