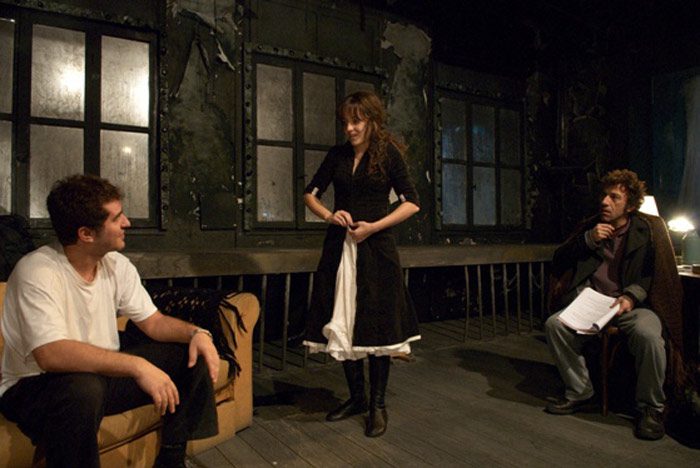 Efthymis Papadimitriou and Elena Mavridou are the winners of this year’s Dimitris Horn and Melina Mercouri theater awards respectively.

Both are promising actors, flexible on stage, who each received an important distinction for their performances this year.

Elena Mavridou moved audiences as Loula in Sakis Serefas’s Liomeno voutiro (Melted Butter), a role for which she was given Melina Mercouri’s brooch for one year, a prize presented to her by last year’s recipient, Stefania Goulioti. She also made her mark as an innocent shepherd girl in Simos Kakalas’s much-discussed Golfo.

She dedicated her award to Kakalas, since it was with his troupe that she learned the art of searching, along with the dedication that only the older troupe actors know.

At the age of 29, she has had the experience of performing both on stage and in a village square. She has played for theatre buffs but also for theatrically challenged audiences.

Efthymis Papadimitriou, known as Makis,  distinguished himself at the Neos Kosmos Theater. It was for his role in Simon Stephens’ Motortown, directed by Vangelis Theodoropoulos, that he received the Dimitris Horn award.

Last year’s winner, Thanassis Alevras, presented Papadimitriou with Horn’s gold cross to keep for one year, in a ceremony that recently took place in the Dimitris Horn Theater that was packed with young people.

Clearly moved, Papadimitriou expressed his sadness at the passing away of a close friend of his a few days earlier as well as the death of fellow actor Constantinos Papachronis. He dedicated his award to both of them and was congratulated not only for his performance in Motortown, but also for his role in the television series Mavra mesanyhta.

Papadimitriou, born in Athens in 1975, graduated from the National Theater of Greece drama school. At the Neos Kosmos Theater, he participated in numerous plays, including Martin McDonagh’s The Lieutenant of Inishmore and Yiannis Kalavrianos’s Ego imai to theio vrefos (I am the Holy Infant) and has also directed.