Art to colour your mind 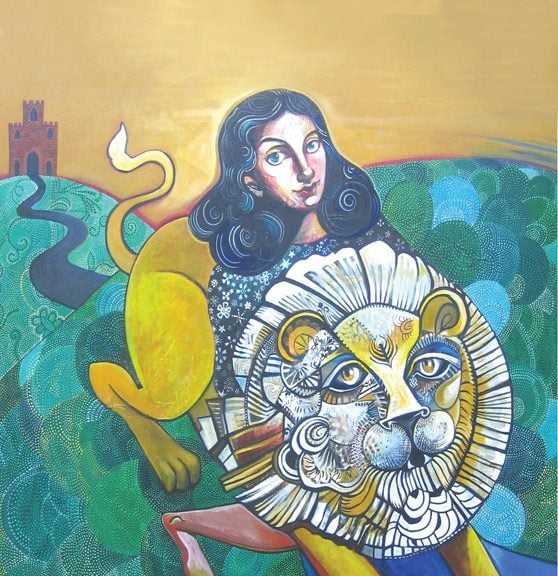 Efrossini Chaniotis has an exhibition coming up and looking at her work it would be fair to say there are influences of Chagall, Mattisse and the Fauvists, because of her strong use of colour.

Then there’s the reoccurring lions, the castles and the stridently ethereal female figures, as the subject matter, that suggests she aslo tips her cap to the 19th Century school of Symbolist Art.

“I would say that, yes, Chagall is certainly what I have been thinking about lately” said Chaniotis, “But I have other influences like South American and the Greek Byzantine.”

Again, two more schools of art that show enormous panache when it comes to merging colour with symbolism. But it’s Chaniotis’ use of colour that seems to do the actual job of lighting up one’s eyes, as much as they serve as a tool for a greater narrative.

“Definitely my use of colour is very strong and I’m fairly courageous by using colours straight from the tube, that I tend not to blend my colours too much. But I guess it’s the emotive use of colour that I like to go for,” said Chaniotis.

But then Chaniotis explained although it’s flattering these comparisons to other schools of art are being made, “none of my influences are particularly conscious,” and that really her impulses are very intuitive, rather than rationally conceptual.

“Although my training is in draftsmanship and the fine arts, when I started to do this kind of work it had a kind of imaginary narrative component,” said Chaniotis.
“I started working very intuitively with the way I was drawing and not doing a lot of preparatory drawings. So it tends to be quite raw.”

Symbolically speaking, her use of a woman straddling a lion is reminiscent of the Strength card in the Tarot. “Yes, you could say that, but when you are working with archetypes those connections can be endless,” said Chaniotis.

But she then went on to say, if there is a connection it’s probably more with the Cypriot Saint Mamas who is often represented riding a lion in Greek iconography.

Although each of these symbolic references are wholly different to each other in their intentions: the tarot card being a meditation on managing one’s desire and Mammas as the patron saint of avoiding taxes (or the protection of animals), this imagery for Chaniotis still remains aesthetically instinctive.

All these images first appeared in a series of small paintings she did about seven months ago, explained Chaniotis.

“In the beginning a lion appeared in the background in one of my landscapes and in the next painting the female figure, the subject of the work, is seen riding the lion in the foreground, which for me is a mysterious appearance and it’s my job to notice these things in my periphery.”

The castle is another dominant image and because Chaniotis comes from Corfu with its many fortresses dotting its landscape, this is possibly why they feature in her work.

But in the end who knows why the subconscious throws up anything and the reasons, if there are any at all, may not be as accessible as we would like them to be.

What is fundamental about Chaniotis’ work is they do possess a naive beauty, and that whatever story is being told, this beauty is like an aperture in one lens that comes only to the eye of the beholder.

The term ‘naive’ is conveniently coined by rationalists to describe this style. However there is another term that might say the same thing, yet we are reluctant to use it these days, which is ‘spiritual’.

Because when asked, if she has any political or social intentions, Chaniotis came up with other words like ‘belief’ and ‘mystery’. Chaniotis was herself reluctant to use the word ‘spiritual’ to describe her work when pushed.

Not because she doesn’t like or agree with it, but because like many others, Chaniotis is afraid of the ridicule she might receive from the hipsters who roam the gallery scene.

To such an extent this word had to be pulled out of her with a personal reassurance that in an ideal world she, or any artist for that matter, should not be censored by this reigning pathological rationalism, considering it’s now ‘hip’ to cite Einstein’s preference for the power of the imagination over mathematics.