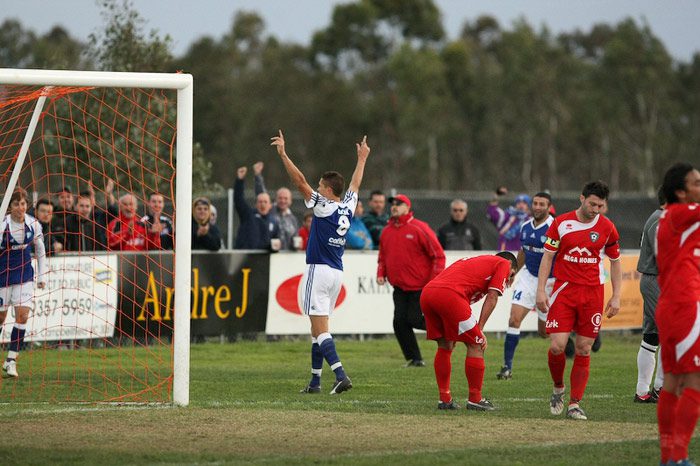 Former New Zealand international, Vaughan Coveny, cemented his place in the annals of South Melbourne Hellas history when he brought up his 100th league (NSL and VPL) goal on the weekend in the South colours, as the Albert Park club won 1-2 at Hume City.

As the ball crashed into the back of the net on Saturday, Coveny, triumphant, just stood with a huge grin on his face and his arms outstretched facing the fans.

His team mates rushed to the ‘Horse’ to celebrate along with fans themselves who could not get close enough to the legend. Only one player (Paul Trimboli) has scored more times (115) for South Melbourne.

Coveny is a player who has entertained the South faithful over his 12 seasons at Bob Jane Stadium, a very quick player who has always remained dangerous and an imposing figure capable of winning games.

Coveny was brought to South in 1995 by Frank Arok, after short stints with both the Melbourne Knights and Wollongong.

The big Kiwi’s first goal for the club was on the 24th of September 1995 in a Docherty Cup Quarter Final match against Preston at Connor Reserve. South won the Docherty Cup as the big man got three goals from three games.

Coveny had an excellent debut season for the club in the 1995/96 NSL season, registering nine goals from his 26 games. South claimed the NSL cup as Coveny scored six goals in the comp including a hat-trick against the Melbourne Knights.

Seasons 1996/97 to 1998/99 showed just how valuable Coveny was to the team, as the big forward registered 28 goals to help South reach the Preliminary Final in 1996/97 before going on to win back-to-back championships the next two seasons.

Coveny nearly made history in 99/00 as he twice went agonisingly close to scoring against Manchester United in the inaugural FIFA World Club Championships in Rio de Janeiro, including having a shot that hit the left post and roll across the goal line before hitting the right post and staying out.

Horse was back to his best for the 2000/01 season, scoring eight goals as the team fell just short of a record fifth NSL championship.

The following season Coveny hit seven goals in the last nine games of the regular season, including a hat-trick against Wollongong at WIN Stadium in round 25.

Although South missed out on the finals in 2002/03, Coveny added another 11 goals to his tally, this time from only 21 matches.

Supporters will remember his double against Sydney Olympic in the unforgettable 6-4 home victory, with the Kiwi’s 89th minute penalty wrapping up the three points.

New coach Stuart Munro appointed Coveny as captain for the 2003/04 NSL season and the big man did not disappoint, with another big haul of 12 goals from 24 matches, including a hat-trick and two doubles.

Coveny showed his loyalty to South by continuing on with the club when it re-joined the VPL in 2005, forever endearing himself to the clubs true fans when so many walked away from South, and in the process scoring nine goals.

The ‘Horse’ only played 10 matches in 2006 before being signed by A-League side Newcastle; however he still managed to score six goals before departing.

After walking away from A-League football, Coveny re-joined South and helped Hellas lift the Hellenic Cup in 2009, scoring a semi final double against Oakleigh and a power-strike in the 3-0 Final rout of Heidelberg.

Coveny has showed his class in recent weeks, with an assist and goal against the Melbourne Knights and then an outstanding strike against Richmond to bring up his 99th league goal.

His header into the open net against Hume brought up the milestone, making him only the second player to reach 100 league goals for South.