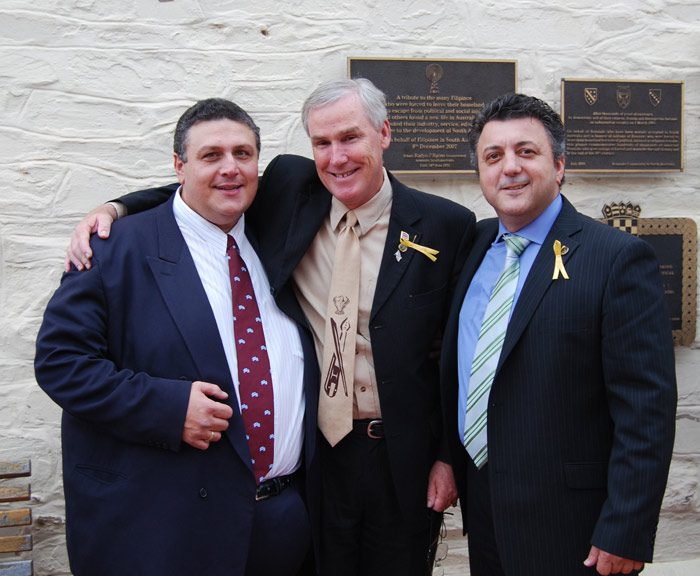 The three saviours of Pontos.

It is the first such recognition by any State or Federal Parliament in Australia. The resolution was proposed by South Australia’s Attorney-General, Minister for Justice, Multicultural Affairs and Veterans’ Affairs, Michael Atkinson.

The resolution states: “That, whereas the genocide by the Ottoman state between 1915-1923 of Armenians, Hellenes, Syrian and other minorities in Asia Minor is one of the greatest crimes against humanity, the people of South Australia and this House – join the members of the Armenian-Australian, Pontian Greek-Australian and Syrian-Australian communities in honouring the memory of the innocent men, women and children who fell victim to the first modern genocide; condemns the genocide of the Armenians, Pontian Greeks, Syrian Orthodox and other Christian minorities, and all other acts of Genocide as the ultimate act of racial, religious and cultural intolerance; recognises the importance of remembering and learning from such dark chapters in human history to ensure that such crimes against humanity are not allowed to be repeated; condemns and prevents all attempts to use the passage of time to deny or distort the historical truth of the Genocide of the Armenians and other acts of Genocide committed during this century; acknowledges the significant humanitarian contribution made by the people of South Australia to the victims and survivors of the Armenian Genocide and the Pontian Genocide; and calls on the commonwealth parliament officially to condemn the Genocide.”

The issue of the Pontian Genocide had recently stirred a contentious political debate in South Australia with the Liberal Senator Alan Ferguson accusing Mr Atkinson of playing politics on the issue.

In a speech he delivered at the Senate on March 18 Mr Ferguson went so far as to dispute the validity of historical evidence regarding the Armenian and Pontian Genocides.

“There are always debatable issues. We have the situation with the Armenians, with the Pontian Greeks and with a range of other people who currently are trying to put today’s moral judgment on events that took place 100 years ago.

“These events cannot be accurately depicted. I have no doubt that there were atrocities on both sides. But those of us today find it very difficult to pass judgment – we should not be passing judgment when we do not know the full facts,” Mr Ferguson had said during that speech.

Even when contacted by Neos Kosmos English Edition the Liberal Senator from South Australia although explaining that he did not possess detailed historical knowledge of those facts and of that era, refused to adopt the term genocide.

On his Thursday speech in Parliament Mr Atkinson made reference to Mr Ferguson reiterating that “this senator cannot write off the suffering of Pontian Greeks and Armenians by saying that it occurred early in the 20th century, or that Pontians and Armenians were partly the authors of their own misfortune, or that murder, rape, pillage and exile had a different moral quality early in the 20th century.”

The Leader of the State Opposition Martin Hamilton-Smith took the floor next and addressed the chamber in an emotional speech also recognising the plight of the Christian minorities of Anatolia.

Mr Hamilton-Smith distanced himself from Senator Ferguson’s comments saying, “Senator Ferguson, in my view, made some very ill informed, very wrong, and offensive remarks in the Senate.

“I have spoken to Senator Ferguson about these remarks. I have expressed my view to him. Since I spoke to Senator Ferguson, he has publicly, on radio and in other ways, apologised and recognised that his words and language were inappropriate.”

The South Australian State Opposition Leader did not hesitate to proclaim his allegiance by stressing, “As a man married to a Greek, with a son who is half Greek, who is Orthodox, this has very much touched me and my family.

“Let there be no doubt in the mind of any South Australian about my view and the view of the state Liberals of these terrible and tragic events.”

He continued by chastising Mr Atkinson for politically taking advantage of that situation by sending to his Greek constituents the speech made by Senator Ferguson.