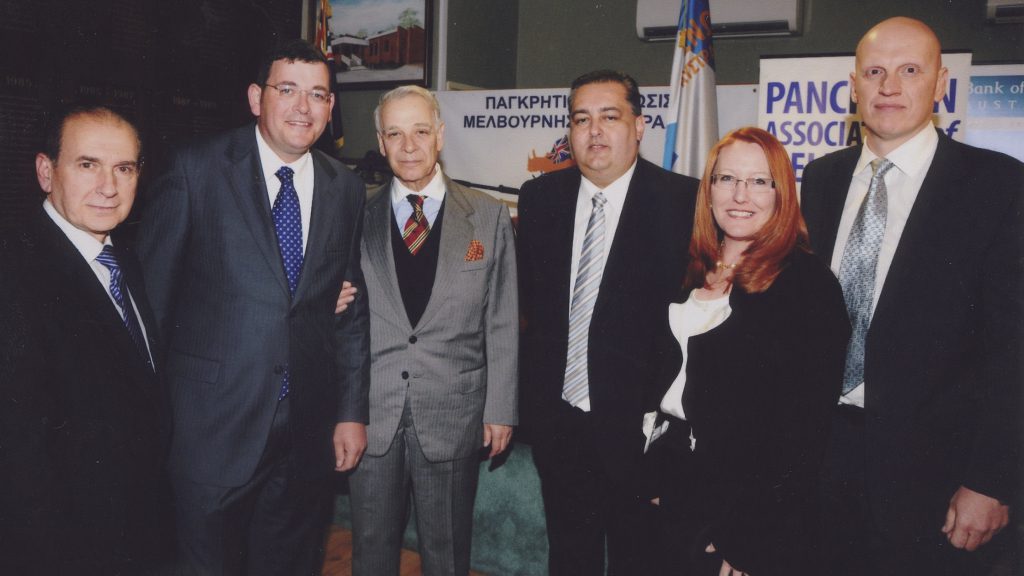 The Australian delegation heading to Greece to commemorate the 70th Anniversary of the battle of Crete will depart Australia this weekend ahead of a fortnight of services and ceremonies.

The mission will include six WWII veterans who fought in Greece and Crete in 1941. Norman Maddock, aged 88, Basil Hayler, 89, Arthur Leggett, 92, Bill Taylor, 94, Alf Carpenter, 94, and Dan Bowden, 101, all fought in the Crete campaign and will make the trip this week.

Mr Hayler, a sailor who served on the HMAS Perth told Neos Kosmos he’s looking forward to re-visiting the Mediterranean, where he spent much of WWII patrolling on various ships. “I think it’s going to be a marvelous experience. I don’t know what to expect,” he said.

“It will be nice to look back over Souda Bay again and see where I used to drop anchor, and where we were bombed day after day. “And see Athens again, where we had some runs ashore and around the Acropolis.

It’ll be great I think.” The Diggers will be joined by a parliamentary delegation including Minister for Veterans’ Affairs Warren Snowdon, as well as several Greek-Australian MPs, and members of the Cretan-Australian community.

Mr Snowdon said it would be an honour to visit Greece with some of the men who fought to defend it. “The Battle for Greece and Crete resulted in a strong bond between Australia and the people of Greece, and that friendship has not wavered in the 70 years since. It endures in the hearts of the thousands of Greeks who made their homes in Australia post-war,” he said.

Mr Snowdon said the Allies had been poorly equipped to withstand the German onslaught on Greece in 1941, lacking aircraft and armour and outnumbered on the ground and in the air. “In spite of this, the Allies slowed down the German advance offering brave and locally successful resistance. When the force finally evacuated from Greece, 320 Australians had been killed, with 494 wounded and more than 2,000 taken prisoner.

“Withdrawing to the Island of Crete the allied troops attempted to fight off an airborne invasion. A further 274 Australians were killed and over 3,000 taken prisoner in defending Crete. “But Australia’s losses paled in comparison with those suffered by the Greeks, with an estimated 500,000 Greek and Cretan lives lost during the war,” Mr Snowdon said.

“If things went terribly differently during that period, you and I might not be here in Australia today. So it’s an event that actually affected our lives as Greek Australians. “One of the reasons that we’re here today, as proud Australians of Greek heritage in this wonderful democracy, is because of those people that gave their lives and their youthful years and went through heaps of hardship to ensure that the Nazis didn’t win,” he said.

The two-week mission will leave for Greece from Sydney tomorrow and will visit Australian Defence Force personnel at Al Minhad Airbase in the United Arab Emirates in the Middle East. On Crete commemorative services will be held at most of the significant sites on the island including the Souda Bay Allied war cemetery, the Maleme airstrip and the German war cemetery.

The veterans will be supported by a small administrative and medical team including a doctor and a nurse. The 70th anniversary commemorative activities kicked off in Melbourne last week, with a series of events marking the service of Anzac and Cretan veterans.

Events included the presentation of the Commemorative Medal of Honour 1940-1941 by the Greek government to 94 year-old Tom Morris from Corowa in Victoria, who was part of the small group of men that held the Germans at the pass of Thermopylae for three days.

Mr Morris said the presentation was probably the best day of his life, except for the day he got married. The sons and grandsons of three other veterans also accepted the medal on behalf of their relatives.

The presentation was followed by a cocktail reception to honour the veterans last Friday evening, and a commemorative dinner dance last Saturday night, where some of the veterans even engaged in a little Greek dancing. “They even had me dancing the Zorba,” Basil Hayler said.