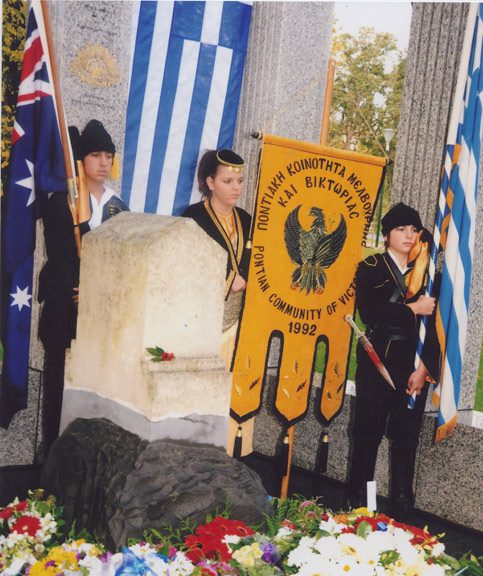 From the commemorative activities in Melbourne

The Pontian, Armenian and Assyrian genocides of 1915 to 1923 have been officially recognised as “one of the greatest crimes against humanity”, by the 2011 National Women’s Labor Conference in Sydney.

The resolution was put forward at last weekend’s conference by Return To Anatolia Chairperson, Sofia Kotanidis, as part of a push to have the genocides more widely recognised. “Recognition and education are the best means to cultivate understanding, of the past and of the present. Understanding prevents the development of the hatred that leads to genocide,” she said.

It comes just weeks after the Armenian genocide was recognised in a resolution by the Swedish Parliament, which drew angry backlash from Turkey.

“Those who think that historical facts and Turkey’s views of its own past will change with decisions made on the basis of political interests of foreign parliaments are seriously deluded,” Turkish Prime Minister Recep Tayyip Erdogan said in a statement.

In memory of the genocides, the Coordinating Committee of Pontian Organisations has been running a series of commemorative activities, including a wreath-laying ceremony at the Shrine of Remembrance in Melbourne last Saturday. As part of the commemorative activities, the CCPO hosted a lecture last week by Panos Kaisidis, visiting Greek journalist, author and publisher of Pontiaka magazine.

Speaking to Neos Kosmos before the presentation, Mr Kaisidis said it was important to recognise and remember the victims of the Pontian genocide. “This was a genocide without a war. No one can argue that there was a war and some people were killed. [The Turks] want to present them as victims of war. They are not, they are victims of a plan,” he said. Official figures state that 353,000 people died as part of the genocide, but Mr Kaisidis said the extermination went much further than what has been officially noted.

“The people [who were exterminated in the villages] are not counted in the figure of 353,000. We say that this figure must be at least doubled. In other words, the victims in Pontos alone must have been at least 600,000, and in all of Anatolia the figure must approach 1.5 million,” he said.

Of those, a large percentage were rounded up, locked in the local church or school, and burned alive.

“We must remember and commemorate these people, these average people, the majority of whom were illiterate, simple people who lived hard, they didn’t have the opportunity to live well.” Mr Kaisidis said the genocide of the ethnic Greeks could be broken down into three stages. “The first genocide…happened in Thrace, Pontos and Asia Minor.

“The second genocide happened on the ships and trains while the Greeks were being transported from there to Greece. More than 15 members of my family died on the ships from diseases such as typhoid and were thrown overboard. These people constitute the victims of the second genocide. “The third genocide happened in Greece where a large number of refugees died from malaria,” he said.

He said the message of the Pontian genocide was clear. We want to tell you not to be asleep, but to wake up because today there are genocides happening all over the world.” “We don’t remember genocides just to honour our dead, but we remember them so that we can prevent them from happening again,” he said. The commemorations will continue this week as the CCPO hosts more events to mark the genocide.

On Sunday 22 May well-known author Kyriakos Amanatidis will deliver a lecture entitled ‘The persecution and genocide of the Greeks of eastern Thrace from 1908 to 1923’. The talk will take place at 4pm at the Pontian Community, 345 Victoria St, Brunswick.

On Sunday 29 May the CCPO in conjunction with the Education Office of the Consul-General will present awards to participants in their student competition. The presentation will take place at 4pm in the Pontian community’s hall, also at 345 Victoria Street, Brunswick.