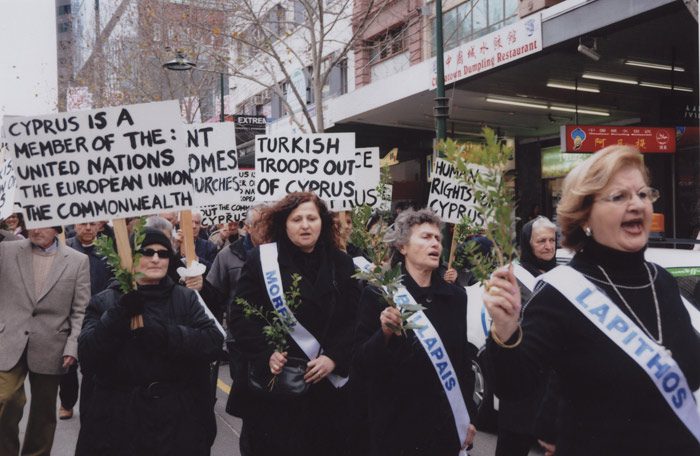 The Justice of Cyprus Coordinating Committee are organising a month of events for July to remember the 1974 invasion of Cyprus by Turkey. The committee will use these events to remember the loss of ancestral homelands to an invading army intent on ethnic cleansing of the northern part of the island of its majority Greek / Cypriot inhabitants and creating a permanent partition.

The week of events will end with a Rally for Cyprus on Sunday 17 July. The aim of the rally, organised by the Justice of Cyprus Coordinating Committee, is “to call attention to and to protest the Turkish invasion of Cyprus, the continuing illegal occupation, the violation of human rights of the people of Cyprus”.

The rally will begin at 1.00 pm on Lonsdale Street and will end at the steps of the Parliament of Victoria.

Yesterday, there was a demonstration outside the Turkish embassy to demonstrate against the Turkish invasion and continuing illegal occupation and to demand the right of return of all refugees to their ancestral homes.

On Friday 15 July, there will be a candlelit vigil outside Parliament House. This vigil will be symbolic of the patience and determination to see a reunified Cyprus where all human rights are respected, including the rights of refugees to return to their homes. This will take place between 5.00 pm and 6.00 pm.

Later that night, there will be a Frugal Supper held at the Cyprus Community of Melbourne and Victoria Centre, 499 Lygon Street, East Brunswick. This supper will commemorate the hardships suffered by the thousands of Greek-Cyrpiots who fled their homes and villages as the Turkish army advanced, leaving all their possessions behind. They believed their absence would be temporary, but 37 years later they are still waiting their return.

There will be a short musical program, speeches by various dignitaries and information regarding the latest developments. This will take place from 7.00 pm to 9.00 pm. A memorial service for the fallen will take place Sunday 17 July at 10.00 am at Saint Efstathios Church, Dorcas Street, South Melbourne. There will also be a literary work on the Cyprus struggle at 11.45 am at the Greek Orthodox Community of Melbourne and Victoria, corner Russell and Lonsdale Streets.