How much does the coverage of the crisis in Greece by the global TV News networks reflect what’s really going on? 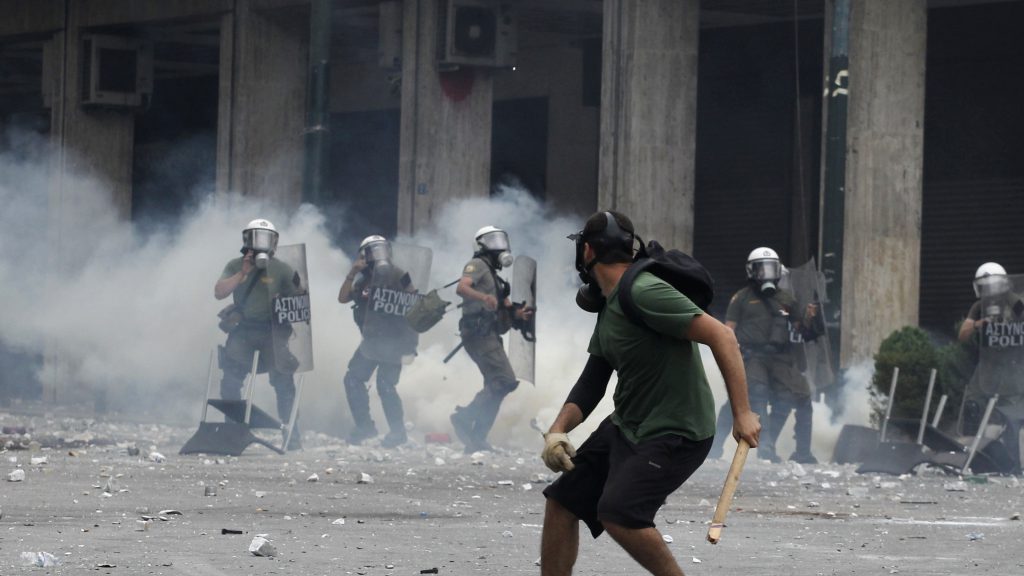 Once more, TV screens across the world showed the latest act in the ongoing Greek drama, violent protest, clouds of tear gas, flames; running skirmishes between police and protestors in Syntagma Square, the bloodied stage upon which the most visually arresting images of protest in Greece are created. But what does this seemingly endless repetition of images convey about the complexity of what’s happening in Greece in these troubled times?

On May 5 2010 the BBC’s correspondent in Athens, Malcolm Brabant, is delivering a ‘piece to camera’, as protestors clash with police in front of the Greek parliament. The BBC’s camera position looks down across Syntagma from a balcony on the north west side of the square. It’s the perfect spot, offering great angles of the ‘business end’ of the square, with the ranks of riot police protecting the parliament’s facade like some modern day Spartan legion confronting their adversaries; activists intent on turning a show of popular solidarity into the goading of the state’s law enforcers. The cat and mouse violence begins; protestors sling stones, others grasp at police riot shields. The police repost, advancing menacingly and firing tear gas.

The vantage point, used by many TV news networks, is far enough away from the orchestrated violence below to be safe, but close enough to give a hint of danger. Often the clouds of tear gas, rise up, and the reporter is caught in the noxious fumes. Such was the case on May 5. The BBC reporter begins.“The streets have now been taken over by the anarchists,” Brabant says, before the effects of the tear gas swirling around the square became too much. He falters momentarily and the programme’s anchor back in BBC World’s London studio, suggests that the image of their stricken reporter struggling for breath, “is an example… if you needed one, of what’s going on.” Just as well Malcolm’s got a gas mask to hand. He manages to deliver the piece, somewhat melodramatically, obscured by the mask. Brabant’s commentary, given the situation, is remarkably articulate, explaining how the protestors who are trying to stop the parliamentarians from voting through austerity measures are anarchists, which may well be correct, though it is impossible to verify.

Describing it as one of the most violent protests seen on the streets since December 2008 is certainly accurate. But the report strays into more problematic ground when the reporter talks about having “rarely seen so many people so angry about the politicians here. They have been challenging them to come out on the streets and face them for what they have been doing.” Brabant’s words are spoken as shots from closer to the violence are cut into the monologue; the reference to ‘people’ implies to the viewer that it’s these people in the melee who represent the many.

The problem is partly a result of the process of television. The piece which appears in many ways as live, is not; it has been edited. It’s of course not an easy task to sum up complex issues, and deliver succinctly, (particularly live), the essence of an unfolding event, whilst simultaneously revealing the unseen depth of the story, all within the limited slot the TV News production machine allows. But that’s what good journalists do.

It was a shame that day, that also the seriousness of the situation the BBC was covering, was undermined somewhat by an editor’s whim in London. “Reporter overcome by tear gas,” became the headline. “Our correspondent, with help from a tear gas mask, was able to resume his report, and described the chaotic scenes on the streets of Athens to BBC World.” The story is re-versioned for the BBC Online, where it becomes a headline piece on the Europe page. Switch channels and jump forward a year to 29 June 2011.

CNN’s heavyweight correspondent Richard Quest is in Athens to ensure the US networks’ coverage of the Greek Parliament’s vote on new austerity measures and the social unrest that will accompany it, is given the necessary gravitas. Once more goggles are required props, as the pieces to camera are recorded. Quest’s commentary from the spot later in the day (without goggles), when Syntagma is quiet, is authoritative; making a point of separating the minority hardcore bent on violence from the majority who had been in the square earlier.

Might it be the case that too often the camera dwells on the small minority who see violence as a legitimate expression of protest? Meanwhile, the vast majority’s presence in Syntagma and beyond are left out of the frame; a sideshow. The world is given at least the misleading visual impression, that the violent minority are representative of a widespread popular uprising.

There is a slight irony about the locations where many of reporters have their vantage points. The north east boundary of Syntagma is flanked by two of the most famous five star hotels in the city. One of the favourite positions is the 7th floor balcony of the most luxurious, the famous Grande Bretagne, witness to a century and more of the drama and often tragedy that has stalked Greece on the stage of Syntagma Square. A few steps inside for the reporter, behind the floor to ceiling toughened glass french-windows, is luxurious refuge; the ‘GB’s’ Rooftop Bar and Restaurant, where an afflicted correspondent can soothe his furrowed brow and gather sustenance before the next piece to camera. A good thing it’s on the channel’s expense account though; the prices here are enough to make your eyes water.

Al Jazeera English broadcasts to more than 220 million households in more than 100 countries. Barnaby Phillips is Europe correspondent for the Doha based broadcaster. From 2006, Phillips ran Al Jazeera’s bureau in Athens until its closure in December 2010. Hugely respected for his work, during his time in Greece, Phillips’ commentaries were some of the most insightful of the English speaking global media. He spoke to Neos Kosmos about his approach to reporting the crisis.

“As a correspondent based in Greece I had a good idea about the country’s underlying economic problems but at the beginning of 2010 I could never have imagined they’d assume such global significance. For TV the challenge has always been to get away from demonstrations and riots – dramatic as they are – and find stories and characters that are more representative of what is happening,” says Phillips.

“You should be wary of letting the riots dominate the story. I’ve always tried to stress that the violent group are only a minority of the crowd. There have been times when the riots assume a political significance and it is impossible to ignore that,” says Phillips who is now based in London. “I also tried to stress how the vast majority of Greek people feel (i.e. the ones who don’t demonstrate at all). It’s good to point out that usually, a few blocks from Syntagma Square, people are going about their ordinary business,” he adds. “The advantage of being based in Greece is that you have a feel for majority opinion; whether people are disillusioned, angry, or satisfied with the government.”