Baby on the way, business idea

Maria Kosti finds a business gap in the baby market, thanks to impending motherhood 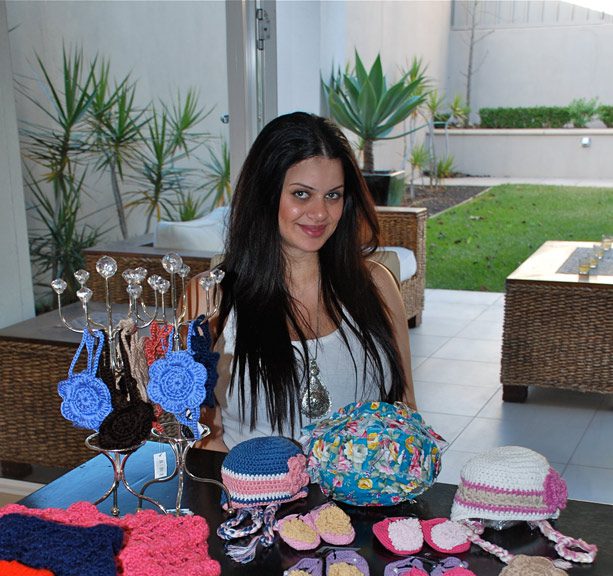 Creativity is something that comes naturally to Maria Kosti. A former interior designer she is blessed with artistic genes from her mother and grandmother. She is a woman who is able to look at colours and understands which ones compliment each other, what textures and fabrics work well and how and when you should draw the line with accessories. She is also a woman with fine taste, one that will inevitably pass this on to her unborn child.

But it was that search for kids clothes with a difference, children’s outfits that had personality that almost forced her to take on the challenge of creating her own.

“I am expecting a little one in about a month so it stemmed from there – trying to find something unique for kids and realising there wasn’t much out there,” Kosti tells Neos Kosmos.

What originally started with an Imelda Marcos-like obsession with shoes, the business idea evolved into something else. It was that initial search for babywear and a desire to pass down generational gifts, that gave Pradus its lifeline – a business idea with its very own Greek twist.

Most of her babywear range consists of crocheted goods and the idea came from the gifts mothers-to-be receive from older traditional Greek ladies. So not to lose this part of our culture, Kosti has taken this idea and put the Pradus touch on it.

“Think of the standard booties that they would knit in the pale yellow and pastel colours. I thought I would funk them up and put a creative spin on them,” Kosti says.

Her children’s clothing creations encapsulate what it’s like to be a kid – they are fun, bright, colourful and playful.

“The range is for mother’s who love something different and unique. Not the normal baby clothes you can buy from Target and Big W. They are feature pieces and most of them are one-offs. They are for people who appreciate the work that goes into hand-made clothes,” she says.

At the moment, the range features clothes mainly for baby girls. There are baby bloomers (nappy covers) in all sorts of vintage flower print fabrics, that Kosti said match perfectly with little singlets and t-shirts, and they have been remade with frills, ribbon and lace. There are baby bloomer playsuits that have a front cover on them and a backless piece for a little girl – old-fashioned fabrics created into a modern style.

And not forgetting the special Greek element Kosti confirms they have “crocheted hats in bright colours and flowers, and some have bear ears”.

“We have some coming in with mohawks for the boys. We’ve also created crocheted blankets and each one has had 52 hours of work put into them. We also have crocheted hand-made shoes in our range.”

“We are currently developing our boys range which is inspired from the grunge and alternative look. We want to stay with the crocheted look, but it’s hard to put ribbons and fills on boys’ clothes,” laughs Kosti.

The great thing about Pradus products is the affordability which, as an expectant mother would know, is paramount for parents. So to have products on the market that are hand-made from 100 per cent cotton, with a designer feel to them, how does she stay in business?

“We don’t have the overheads,” said Kosti of Pradus’ survival. “We are not outlaying a lot money so we don’t overcharge people for our products. You are buying direct from the designer not going though different avenues that force the price rise.”

And, keeping her going is the immeasurable support she gets from her family, especially her husband who Kosti said supports all her ideas and gives her the courage to “go get ’em!” Pradus can be found online at Facebook/pradus.

Pradus will have a stall at the Lollipop markets tomorrow at the Westpac Centre, AAMI Stadium, West Lakes Blvd, South Australia.